We review 23 hot new products for plinkers, PRS competitors, or anyone who loves to shoot 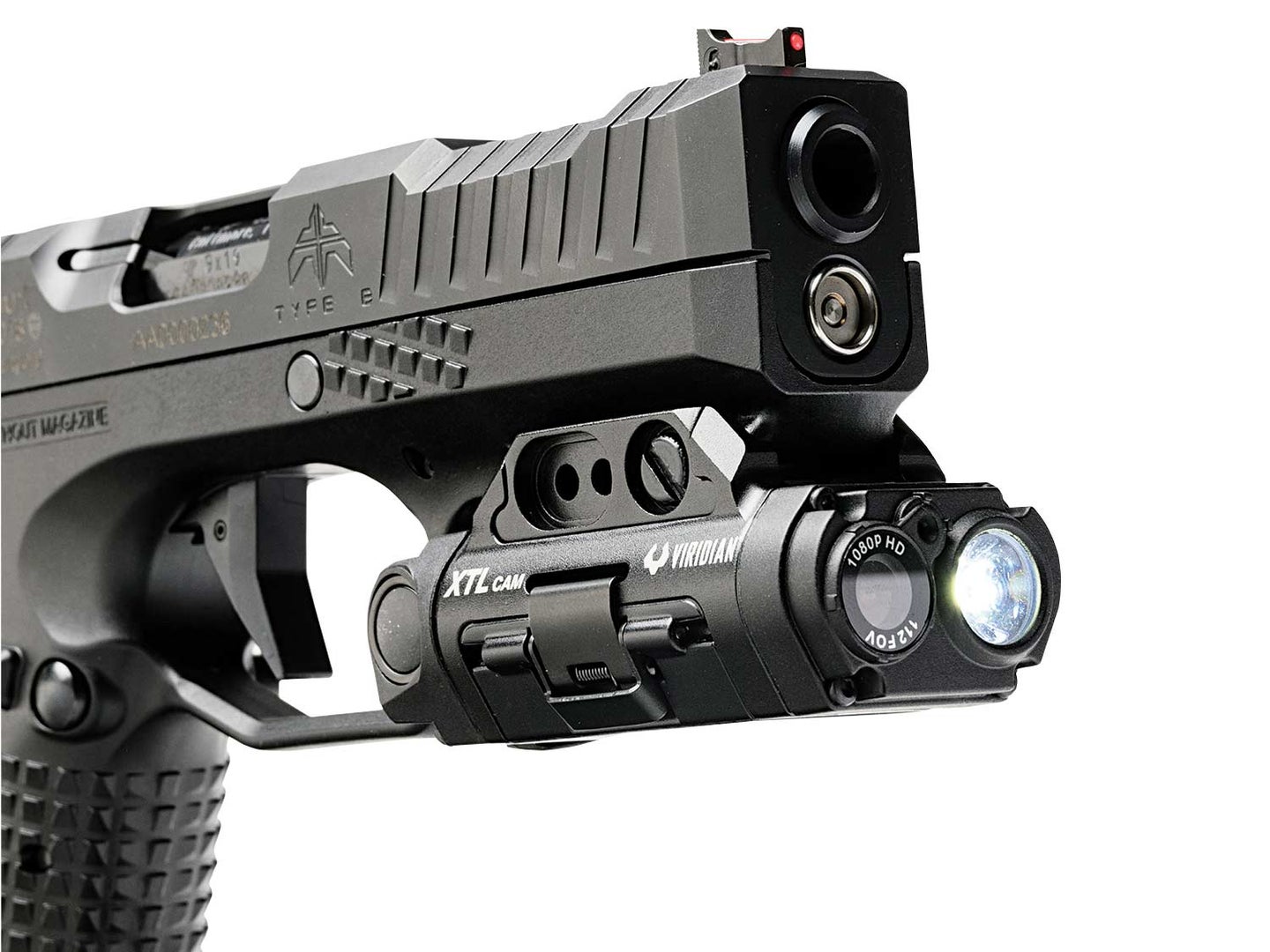 Priced just under two grand, this rifle is ready to compete in the PRS Production Class—or be the most accurate hunting rifle you own. It runs on Glen Seekin’s slick Havak action mated to a KRG Bravo Chassis stock. The 24-inch barrel comes threaded for a brake or suppressor. It also has an adjustable Timney trigger. You can get it in 6 Creed, 6.5 Creed, .308 Win., or 6.5 PRC. The one I shot, in 6 CM, averaged .608-inch five-shot groups with factory ammo. —John B. Snow

The small fan in this unit buzzes like a mosquito next to your ear, but in this case it’s a welcome sound. By forcing air down the barrel, it cools your rifle quickly after you shoot. The Riflekuhl is great for intense range sessions in hot weather and for use between stages in competition. It also serves as a chamber flag. Bring extra CR123 batteries along, because it goes through them pretty quickly. —J.B.S.

I shot a ton of flash targets back in the days of Gun Nuts TV, and I never got tired of watching the cloud of orange “smoke” puff when I hit them. Sure, you can make your own by filling regular targets with orange chalk and gluing paper over the top, but why? It’s tedious and messy, and you can buy a box of 90 ­totally biodegradable flash targets from Champion ­instead. Your time is worth more, and it’s way more fun to break flash targets than to make them, anyway. —Phil Bourjaily

This heavyweight scope (and at 39.7 ounces, I do mean heavy) is one impressive long-range optic. Built on a thick 36mm tube, it has 35 mils of elevation. The locking, sealed windage and elevation turrets give precise tactile feedback and are marked with large numbers that are easy to see in low light. The 5X–27X magnification range is plenty for even the most distant targets. The MPCT2 reticle, which has a Christmas-tree layout with .2-mil reference marks, is clean, simple, and ­effective. As you’d expect at this price, the glass is also excellent. —J.B.S.

The name says it all. This smaller version of the wildly popular original Game Changer is not only more portable, but also constructed with a tacky material that grips both the ­rifle stock and whatever you’re putting the bag on for better stability and recoil management. It comes filled with sand and is pretty heavy, but you can get it with the innovative Git Lite fill (see below) for an extra $25. —J.B.S.

Upland shotguns are light, and target shotguns are heavy, so Benelli made major changes to the 828U field gun to create this Sport version. Replacing the alloy ­receiver with one made of steel added more than a pound to the middle of the gun. The Sport also has a bulkier, target-style stock that comes with a balancer system that lets you add or subtract weight, as well as an effective recoil reducer in the butt plate. The 828U Sport has 30-inch barrels, extended chokes, and a ­carbon-​fiber rib. And unlike any other o/u on the market, the gun comes with stock shims to let you fine-tune the fit. —P.B.

The evolution of reticle ­design is one of the most fascinating elements in long-range shooting, and the new Mil-XT ranks among the most refined and well-balanced out there. The .2-mil tick marks on the horizontal stadia are laid out in an easy-to-interpret pattern. The bold numbering alongside the grid makes for quick, certain holdovers. The single dots in the grid are also very useful for making fast adjustments on ­follow-up shots. —J.B.S.

The Allsport is made to be the one gun a young competitor needs for every target discipline (trap, skeet, and sporting clays), thanks to an adjustable comb and a quick-detach rib system that lets you trade a 50/50 point of impact for the higher 65/35 pattern you need for trap. It comes with a choice of 30- or 32-inch barrels and extended chokes. The length of pull is a short 14 inches, and the pistol grip has a tight radius to accommodate smaller hands. My only quibble with the Allsport is that they don’t make one in my size. —P.B.

This improved version of ­Javelin’s quick-detach bipod system has a throw-lever to dial in the proper amount of tension to control rifle cant. The legs also now lock in place when spread out, for additional stability. The bipod attaches to the rifle via a powerful magnet, yet comes free with a sharp tug. With an array of available adapters, it’ll work on any ­rifle. Some will attach to a swivel stud or Picatinny rail (both shown), or you can get a cup inletted into your stock for a more low-profile ­connection. —J.B.S.

I know many older pistoleros who have given up shooting handguns with iron sights because their aging eyes can no longer see the front blade clearly. Before you hang up your six-gun, give these glasses a try. They are bifocals that put the magnifier on the upper part of the lenses so that when you drive the pistol forward and tip your head down, that front sight pops sharply, just like it did back in your glory days. —J.B.S.

The Kestrel 5700 is the gold standard in handheld ballistics calculators. Now it’s paired with ­Hornady’s powerful 4DOF software, which includes Doppler radar-generated profiles of many bullets. These profiles are more accurate than those based on B.C., which makes it easier for you to tune your data and get more hits at long distances. —J.B.S.

The latest version of Sunrise Tactical’s wrist coach has an improved cinching system that keeps it securely in place so that your ballistics data is always in plain view when you need it. The main display window accommodates a 3-by-5 index card and can be written on with grease pencils or erasable markers. The top window folds over to ­reveal another panel where you can store additional dope cards or other information. You can order it with a third interior panel as well for an extra $4. —J.B.S.

CCI’s original Quiet-22 has been a favorite plinking load of mine for years, and the segmented hollow point is a squirrel killer inside 20 yards, but I’d never expect it to work in an autoloader. So, I was skeptical about this new load, which throws a 45-grain round-nose bullet at 835 fps. But my Beretta 87 pistol—which is a little ammo-picky—cycled it like a champ. Through a suppressor, it’s as quiet as a moth fart. —Will Brantley

At least once a day, I step away from my desk to pick up a .22 rifle or revolver and harass the spinning steel plate in my backyard. Such a regimen calls for plenty of practice ammo. I’ve always appreciated things packaged in buckets—lard, hydraulic fluid, fried chicken—so I really like the handiness of the 1,375-count Bring Your Own Bucket from Federal. It’s full of 36-grain copper-plated Long Rifle hollow points, but bulk packages of .17 HMR and .22 WMR are also available. If you don’t need a whole bucket, there are 250-count Bring Your Own Bottles too. —W.B.

CZ updated its popular 455 rimfire rifle action this year with an American-style push-to-fire safety, a fast 60-­degree bolt throw, and stronger bottom metal, among other tweaks. Every gun I’ve tested in the new 457 ­series has shot lights-out, but the ProVarmint is the most fun. The 16.5-inch varmint barrel is threaded to match CZ’s new Rimfire Integral suppressor, which fits so seamlessly that the combo looks like a straight 21-inch barrel. It’s practically ­unnoticeable—just like your gun’s report. —Michael R. Shea

What sets the Smart Drive 90 apart from other basic gunsmithing toolkits is that the driver has an LED light in the handle that illuminates your workspace so you can see what you’re doing. This clever innovation makes scoping rifles, tightening guard screws, and installing accessories a lot easier. Plus, the driver has another standout feature: a smaller secondary handle that attaches to the main one. Called a “torque assist,” it sticks out at a 90-degree angle and gives the user additional leverage if needed. —J.B.S.

The XTL is a 500-lumen light that mounts to the rail of a pistol with a single screw and has a 1080p HD camera with microphone that automatically starts recording when the handgun is pulled from the holster. The resulting footage is great for analyzing your technique and a fun way to see how you ran a stage at your last match. The XTL Cam is waterproof and runs on a rechargeable lithium battery. —J.B.S.

This rifle, designed by Frank Galli, a former Marine scout/sniper and current long-range shooting instructor, is built on a Remington 700 action and a Saber MRCS-AR folding chassis. Available in either .308 Win. or 6.5 Creedmoor, it comes with a sub-MOA accuracy guarantee and has all the adjustability and modularity you’d expect from a modern long-range rifle. —J.B.S.

If you spend a lot of time at the gun range, it makes sense to invest in high-quality ear protection. These new noise-canceling muffs from Safariland are comfortable, relatively lightweight (13.2 ounces), and built from a durable polymer that can handle bad weather and hard use. I’ve worn mine for many hours at a stretch without any issue. I’d suggest getting the coyote-brown muffs instead of black because they won’t get as hot in direct sunlight. They run on either two AAAs or a single CR123 battery. —J.B.S.

The 10mm craze continues with S&W’s new 610 revolver. But why choose a heavy six-shooter over a lightweight autoloader? Well, because revolvers are cooler, for one thing. But also, with this re-released classic, hunters can expect minimal recoil and fine accuracy. And with its moon clips, the gun will shoot .40 S&W too, which means more options for both defensive and economical practice ammo. —W.B.

These little beads might not look like much, but trust me, they are impressive. I used them to replace the heavier fill in my full-size, waxed-cotton Game Changer bag (which comes with me on every hunt and shooting competition), and it dropped the support’s weight from more than 6 pounds to less than 2.5. Better yet, it did so with very little reduction in stability or recoil management, which is the real magic of these miraculous pellets. —J.B.S.

Like socks that vanish in the dryer, errant shots on the trap field disappear into limbo, or at least they did until the S1 came along. Hit or miss, Garmin’s high-tech shot tracker combines a camera and radar to tell you exactly where you placed the center of your pattern almost immediately after each shot. It syncs to your phone too, allowing you to store rec­ords of ­every round so you can see what shots you need to work on and which guns, chokes, and loads perform best for you. And it’s idiot-proof. I say this as an idiot with firsthand experience with the S1. —P.B.