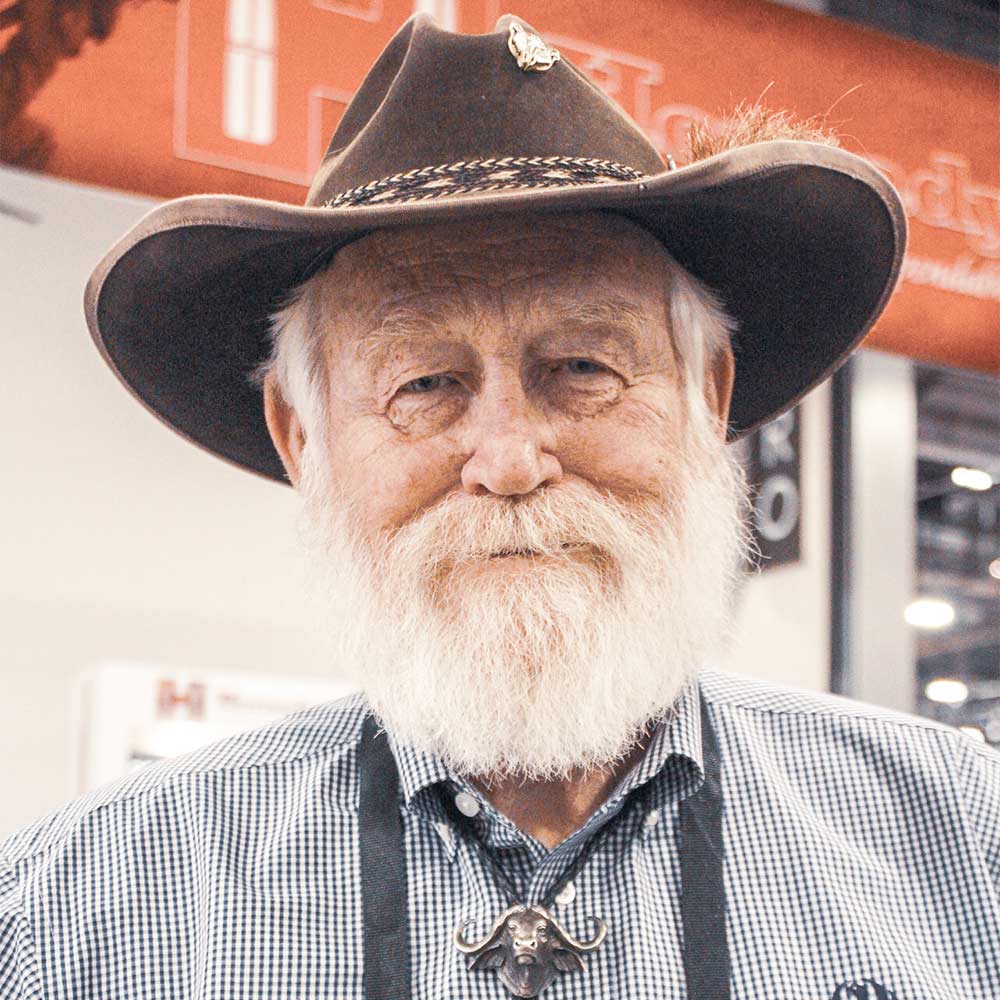 Thousands of people descend to the annual Shooting, Hunting, and Outdoor Trade Show (SHOT) Show in Las Vegas, Nevada, every January to see the latest guns, apparel, and innovations for the coming year. But the trade show is also a prime destination for outdoor celebrities, influencers, hosts, and newsmakers.

Outdoor celebrities are generally asked about new products from companies that sponsor them. But we turned the equation on its head.

We wanted to know what some of the most popular outdoor personalities thought about the cool new products they might have seen on the show floor that were introduced by companies with which they have no affiliation. Here are their responses: 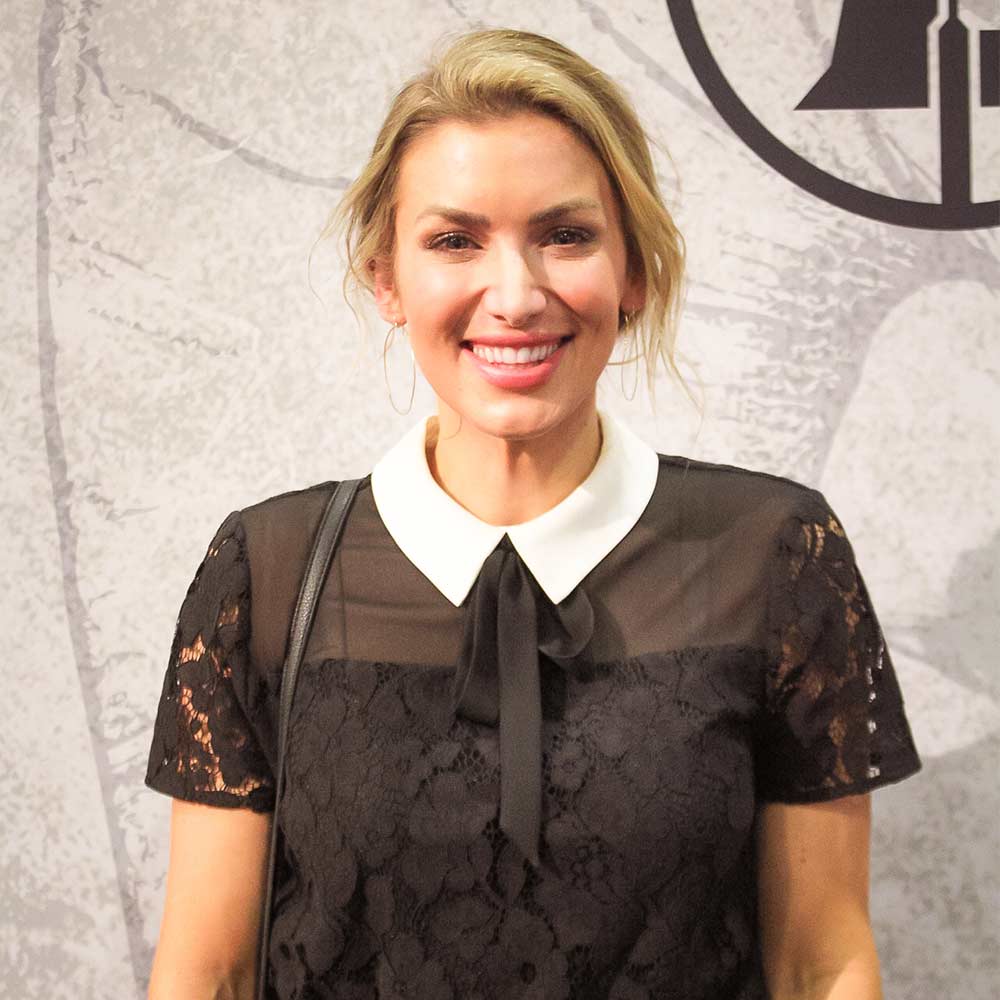 “It’s not a product, but a program: the National Shooting Sports Foundation’s Project ChildSafe. We all hunt. We all shoot. We also all understand that we need to secure firearms properly. As a parent, you just have to know the ins and outs of that. Project ChildSafe teaches people how to keep their guns in a safe place. It’s really about just protecting our own industry and our own love for firearms because we understand that they can be dangerous if not treated properly. I think it’s really important and it’s good for us all.” —Eva Shockey, Outdoor Channel Host and Brand Influencer 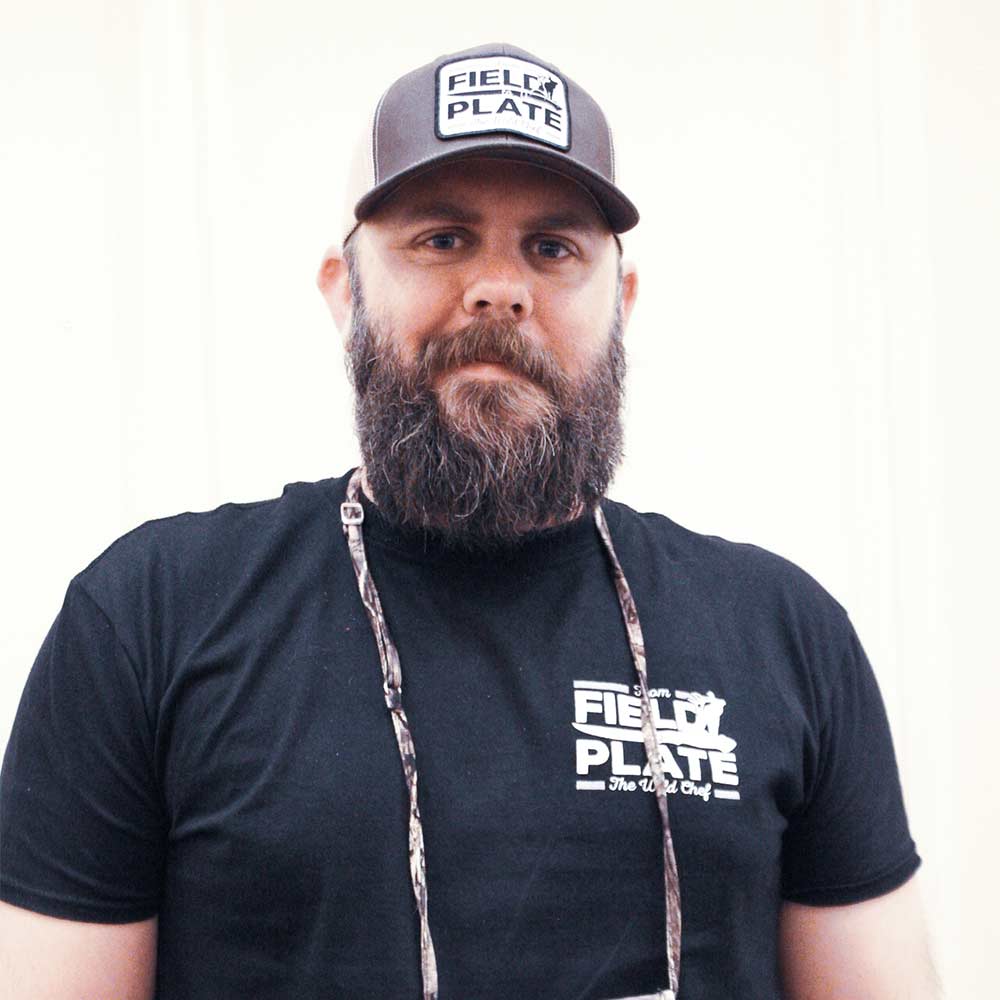 “I think that all the new knife sharpeners out there are really cool. Lansky, for example, has a great new wet-and-dry sharpener on the market. After all, a sharp knife is one of the most important tools in any hunter’s life. It’s no different than having a gun or a bullet that performs. This is a good, inexpensive sharpener that fits in your backpack.” —Wild Game Chef Jeremiah Doughty of From Field to Plate 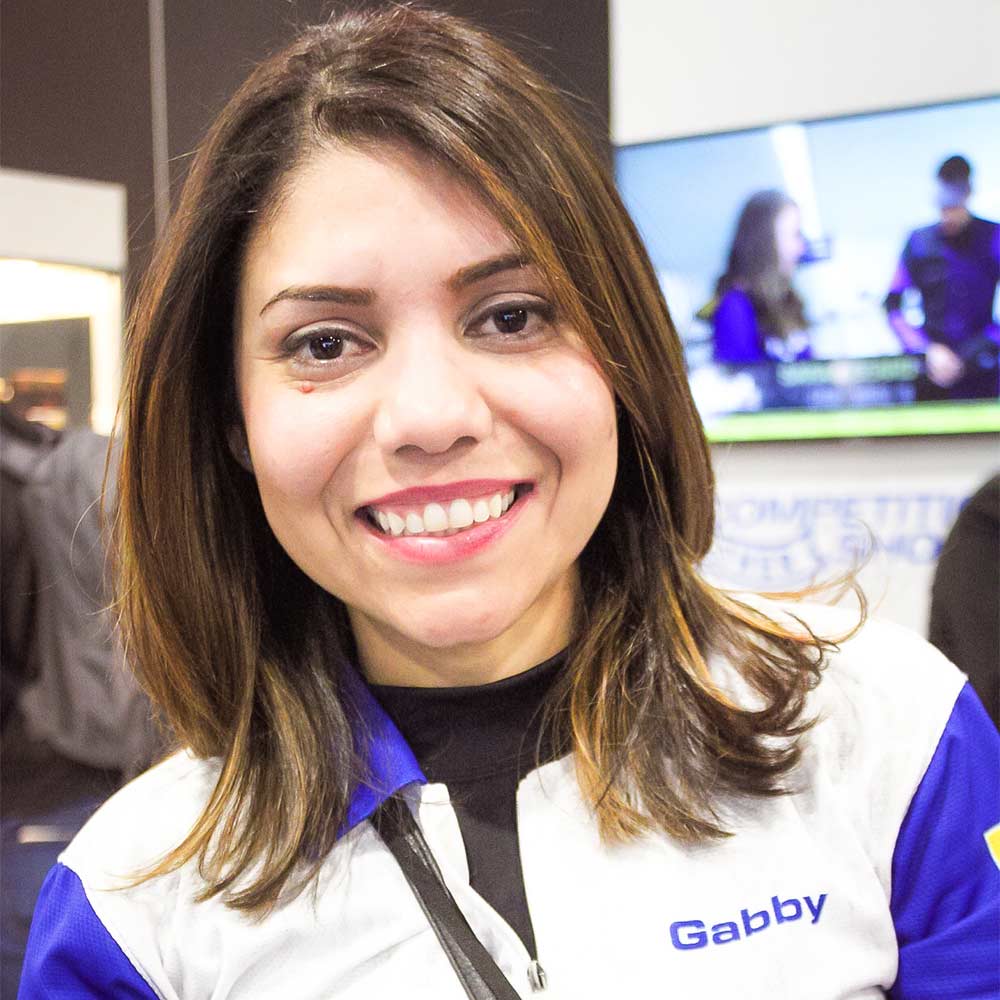 “One of the products I like the most is the Cool Fire Trainer Laser Recoil System kits for Walther. It’s a system that utilizes CO2 and an integrated laser that converts your pistol into an effective firearms training tool. When you dry fire, you feel the slide go back and you feel the recoil of the firearm every time you do it. The interesting thing is that you get approximately 25 dry fires before the barrel runs out of gas. You can fill it up every 20 rounds or so and the tank can give you up to 4,000 rounds.” —Gabby Franco, Competitive Shooter and “Top Shot” Contestant (Season 4) 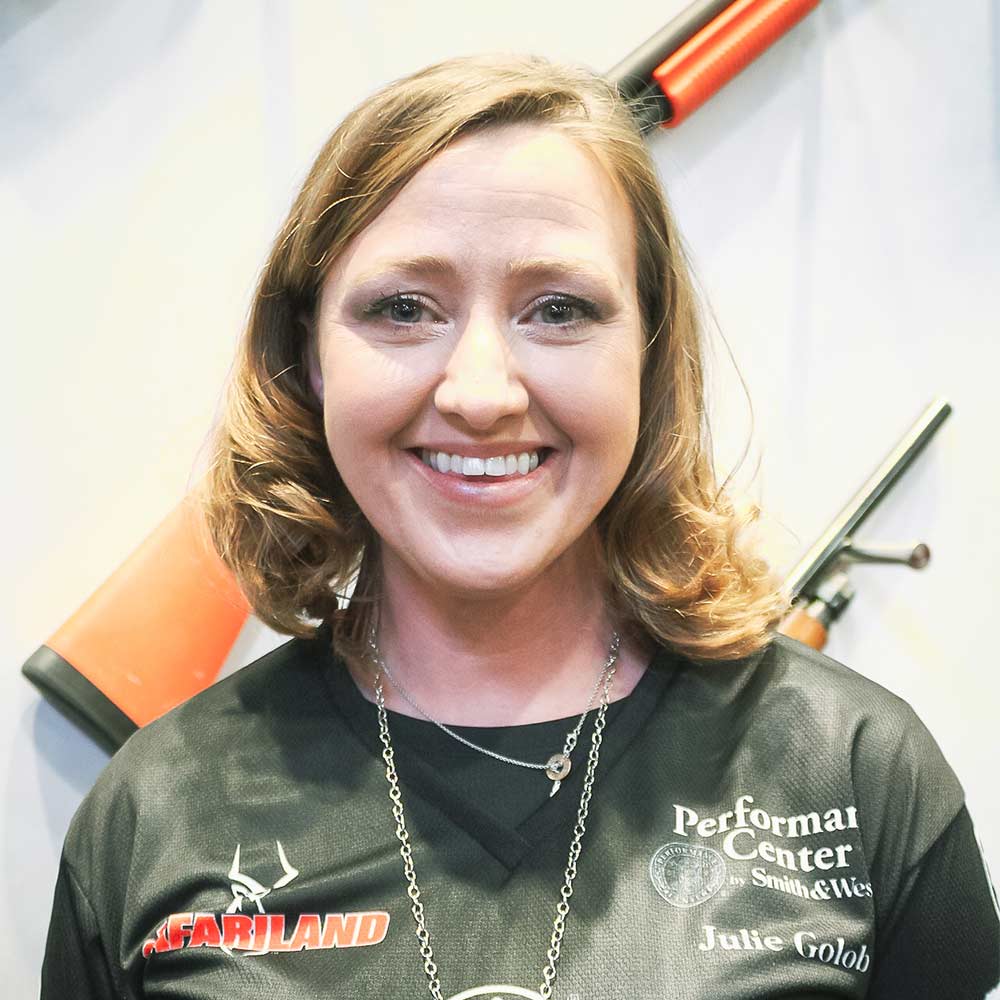 “I have to say that having a Blue Gun training gun is a very, very valuable tool—especially if you’re demonstrating a skill in an environment that doesn’t allow you to do that with a real firearm. That’s one of the things I think is very helpful, especially if you’re talking to people who are on the fence on firearms. It’s an inanimate object that they can learn and get used to, and it’s not as scary.” —Julie Golob, World Champion Shooter and Team Smith & Wesson 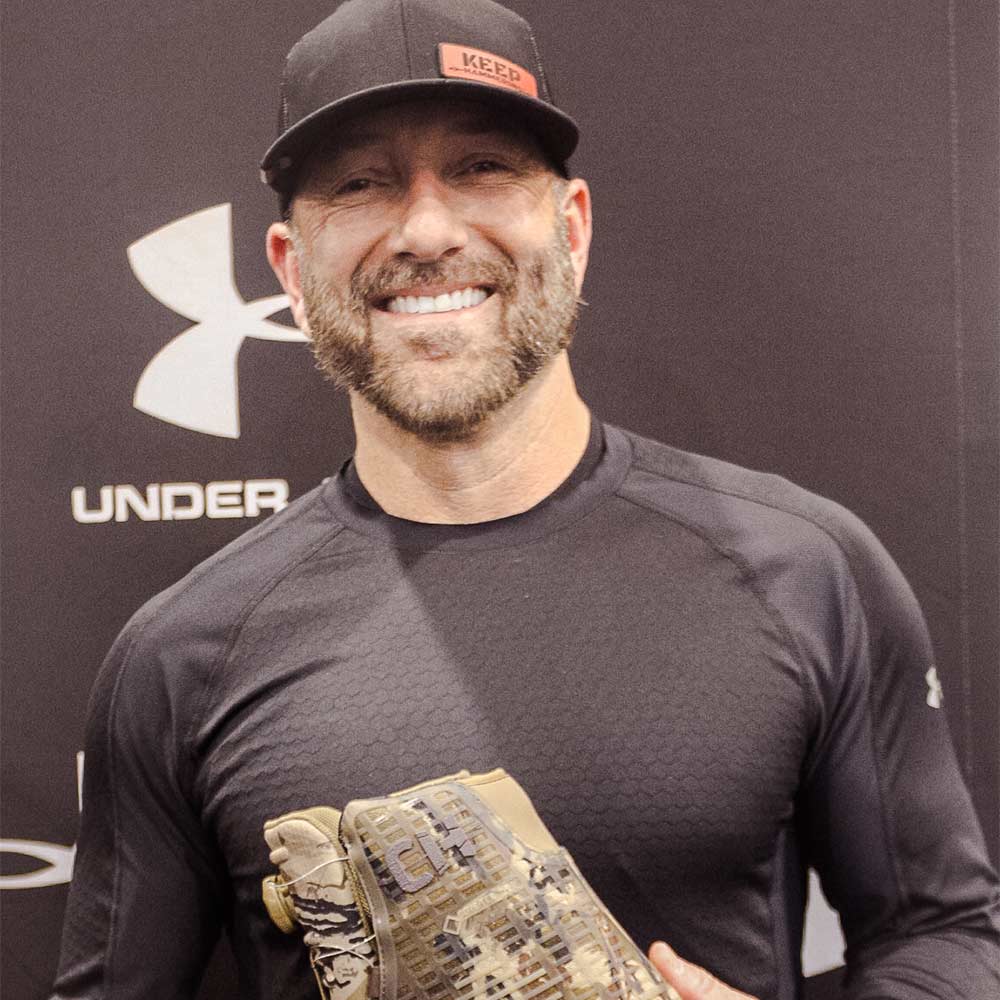 “One thing that’s pretty cool with today’s (GPS) technology is the self-assurance it provides when navigating the backcountry. That’s why I liked the Garmin inReach®. The Garmin inReach® gives people confidence when they’re heading into the mountains. It allows you to text message through your phone, and through a small portable device that clasps to your backpack. It’s amazing what they’ve been able to develop there.” —Cameron Hanes, Bowhunter and Under Armour Athlete 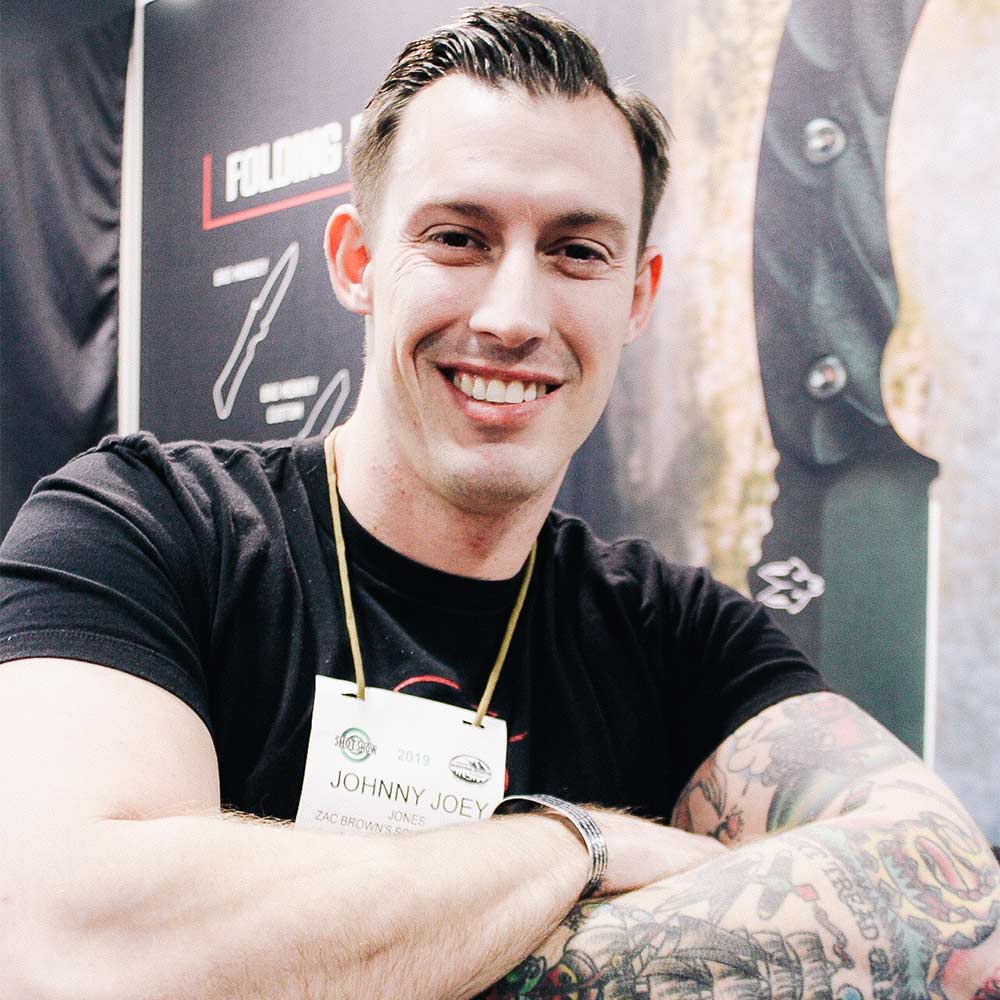 “I’m really excited about Vortex Optics. Their new Viper PSC, the Gen II, is what everyone’s told me about it. I’ve held off on buying one, but I think I’m going to go up there and talk to them about it.” —Staff Sergeant (Ret.) Johnny “Joey” Jones, Fox News Analyst and Camp Southern Grind Spokesperson 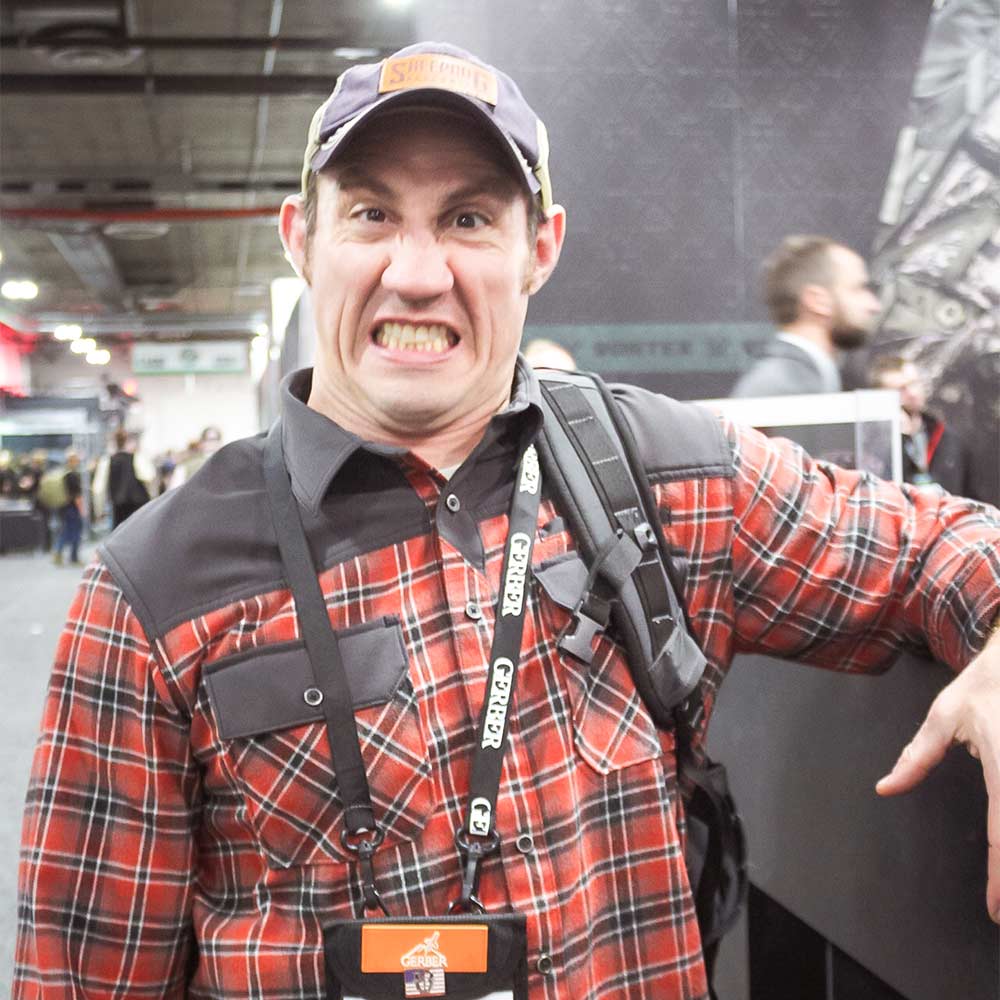 “Norma just came out with a new ammo Bondstrike hunting ammunition. It’s a match-grade quality sniper bullet with a hunting projectile that can transfer the energy—very violently. With a lot of hunting ammo, you don’t get that match-grade quality with the consistency of powder with feet per second, muzzle velocity, and stuff like that. With this, you have a super high-end match-grade bullet with a super high-end hunting projectile. That’s pretty sick.” —Tim Kennedy, Special Forces Sniper/Green Beret and “Hard to Kill” Host on Discovery Channel 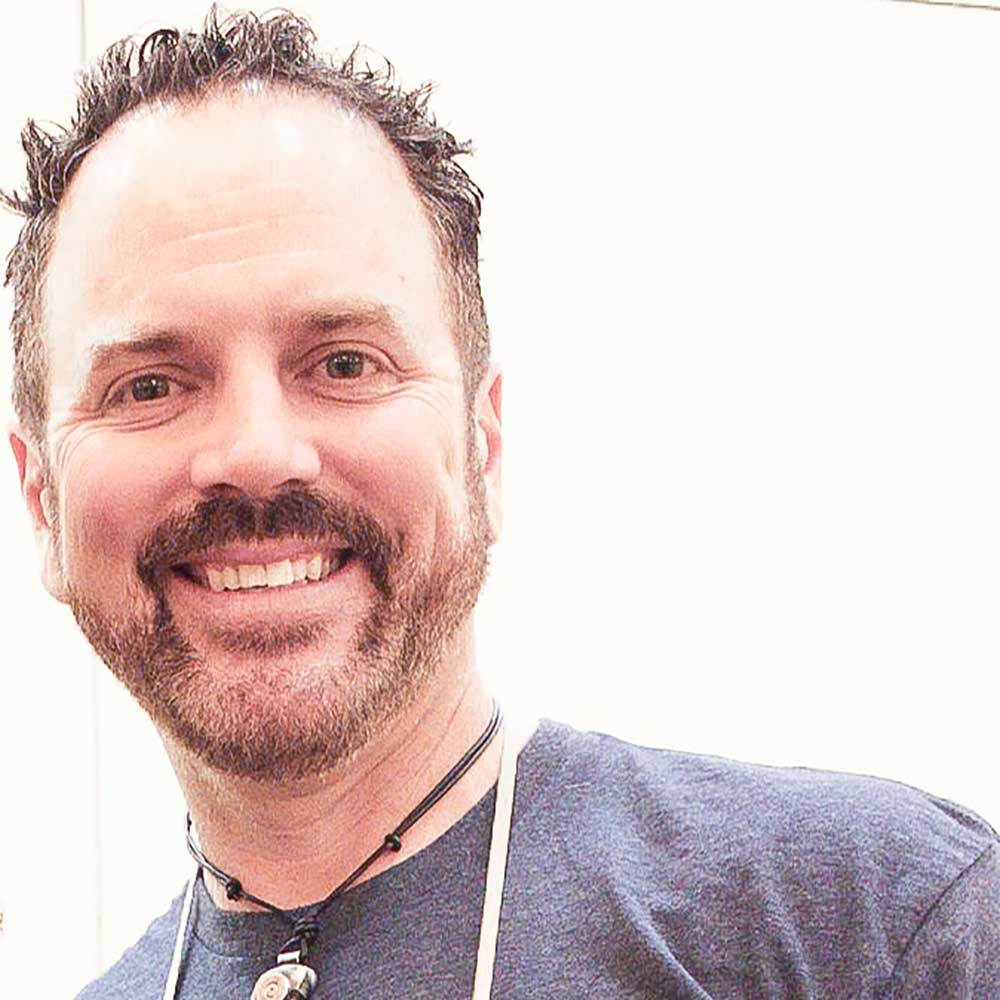 “One that’s really stood out for me really was the Flux-Defense spring-loaded brace for my Glock handgun. With this mechanism, you can shoulder your weapon and shoot much tighter groups. Flux Defense is pretty cool, definitely innovative, and I’m definitely looking forward to trying it out.” —Jim Kinsey, Award-Winning Cinematographer & “Skull Bound TV” Executive Producer 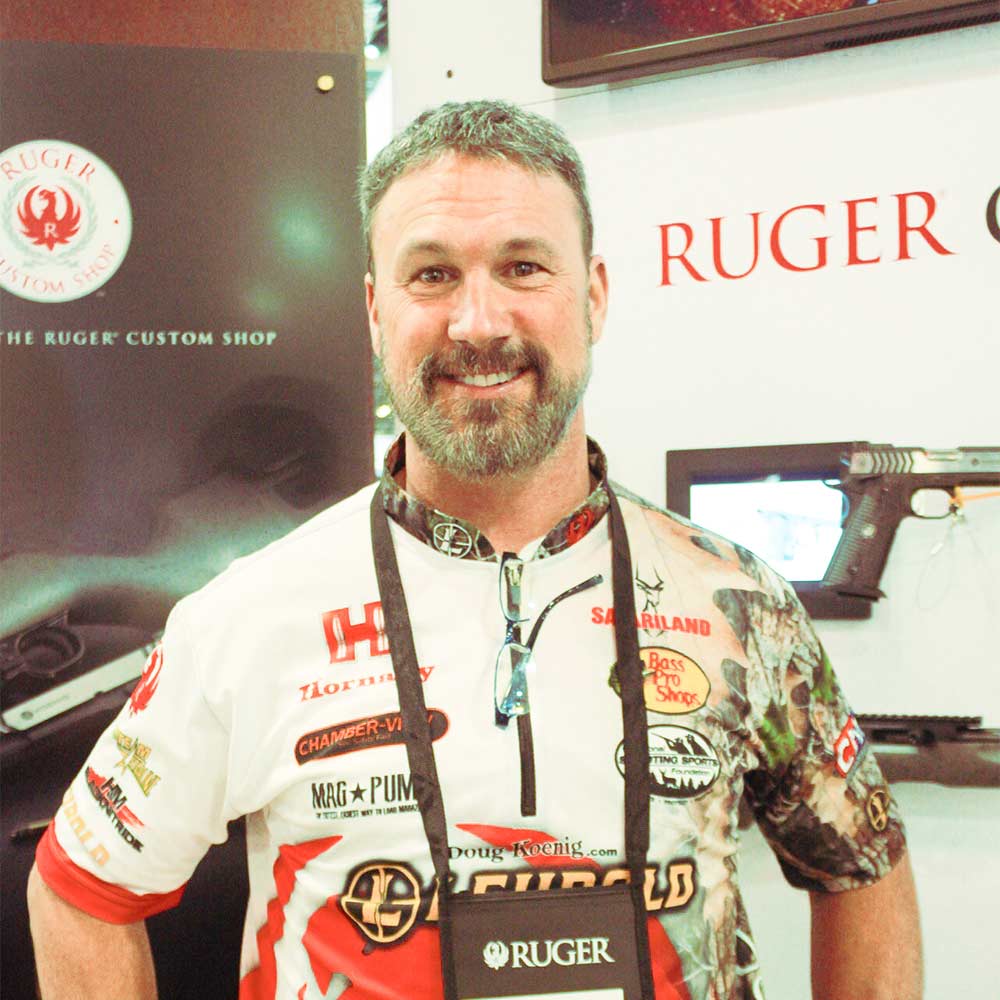 “One of the big products I’ve seen that I like is from the suppressor company Thunder Beast. From what I’ve seen on the range and in their booth, it’s a great product. It does a really good job taking on especially the large calibers, so it’s something that I’m looking to purchase for my own use.” —Doug Koenig, World Champion Shooter and Ruger Team Captain 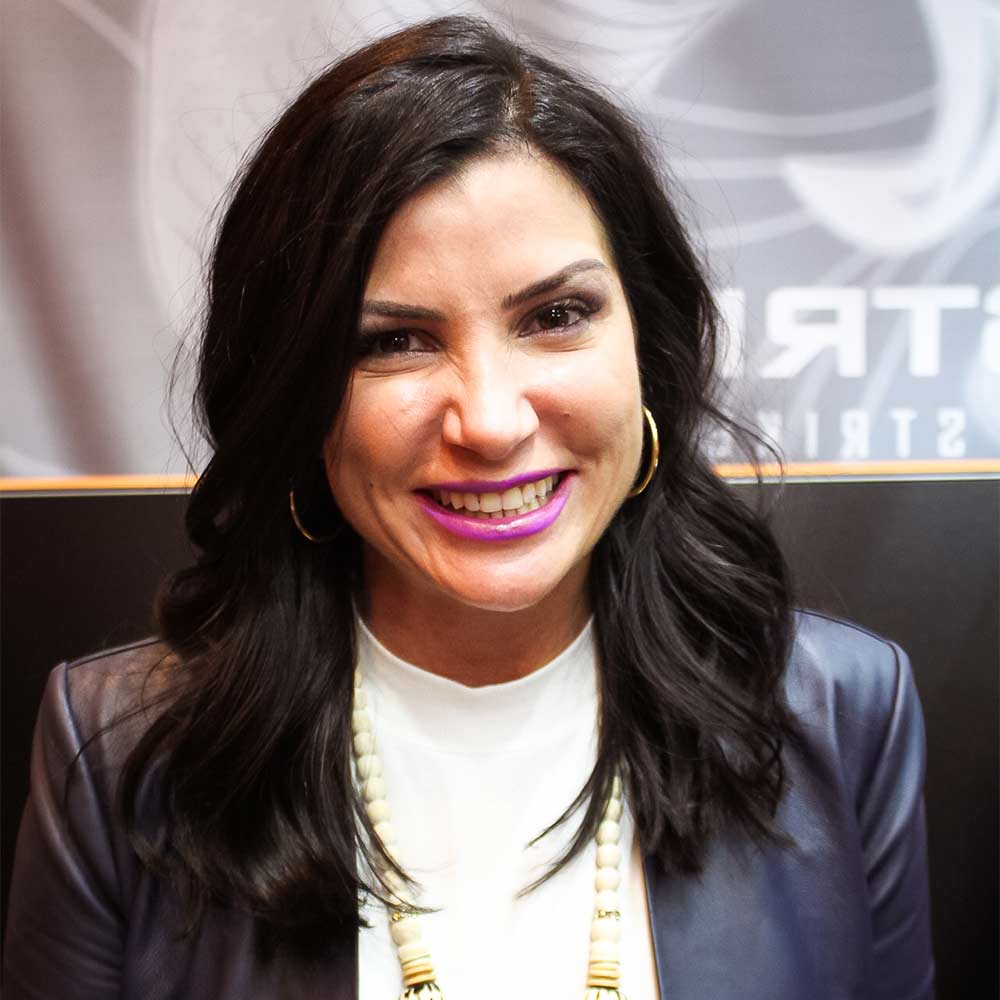 “I really like the Surefire, LLC Sonic Defenders Ear Pro. I don’t like the little spongy [ear plugs] because they bother my ears and I want to be able to hear people. With the Surefire, you can hear voices, but it actually deadens the sound and protects your hearing. It’s just very diminutive and that’s one of the things that I have been wanting.” —Dana Loesch, Nationally Syndicated Radio Host and Bestselling Author 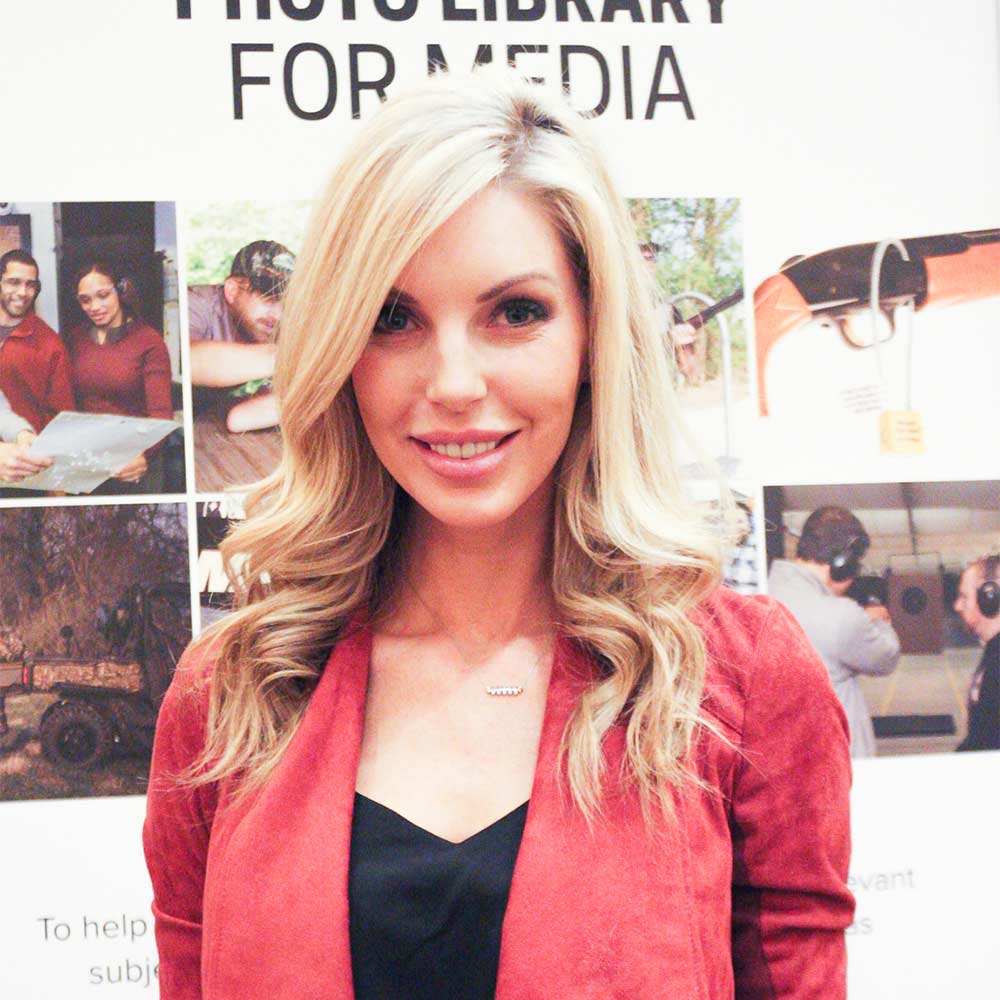 “There’s this company called Identilock that has developed a gun lock that is biometric. Instead of the old-fashioned gun locks where you have to have a key present, this one enables you to lock and unlock your guns with a fingerprint—kind of like how your fingerprint would unlock your iPhone. You can program three different people’s fingerprints to do this. Different people in a household who should have access to the gun can access it in under a second, and the lock falls off as soon as the fingerprint registers. Once the gun is unlocked and the device falls off, you have instant access to your firearm. I just think it’s such a genius idea.” —Julie McQueen, President of CarbonTV and Outdoor Ambassador 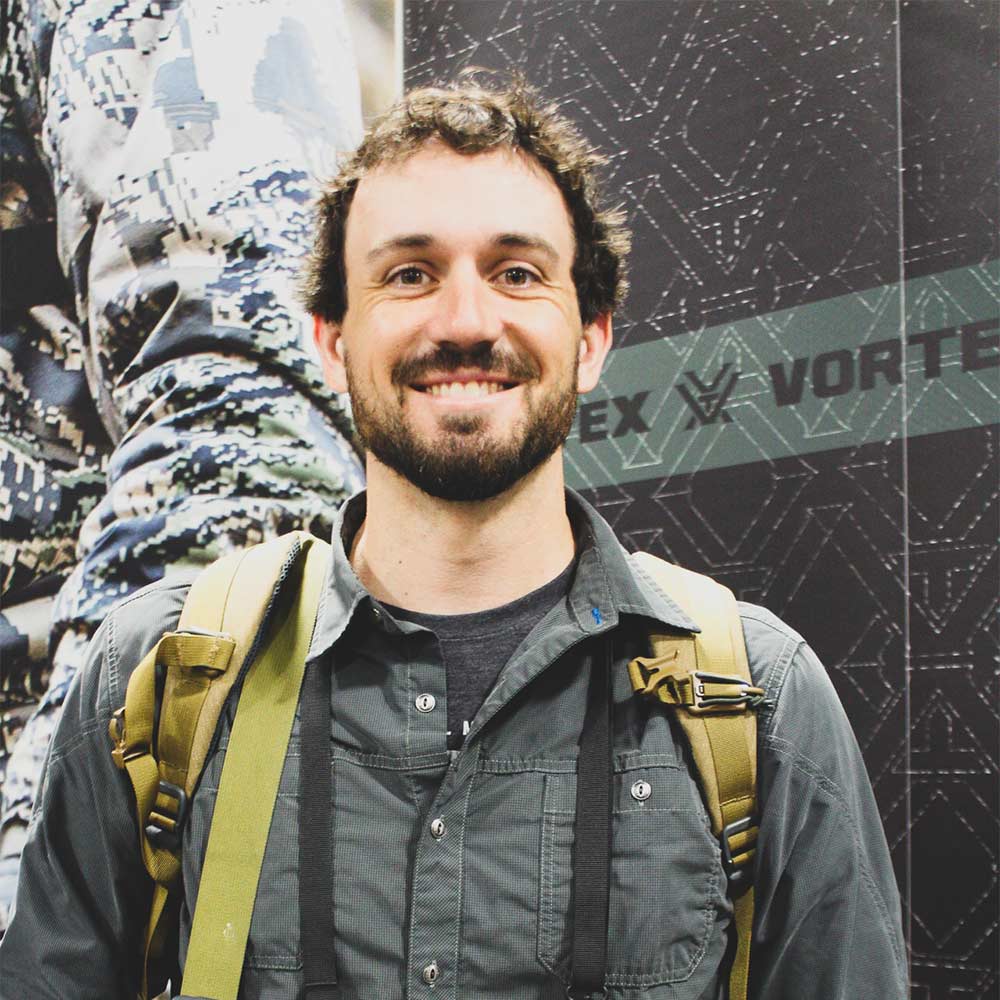 “A product at the show that I’ve found that is really cool is actually the Pelican, traveling boat case Pelican™ Air 1745 Long Case. It’s super cool. It’s only 23 pounds and you can jam a whole bunch of crap in there and still travel.” — Sam Soholt, Freelance Photographer and Public Land Bus Guy 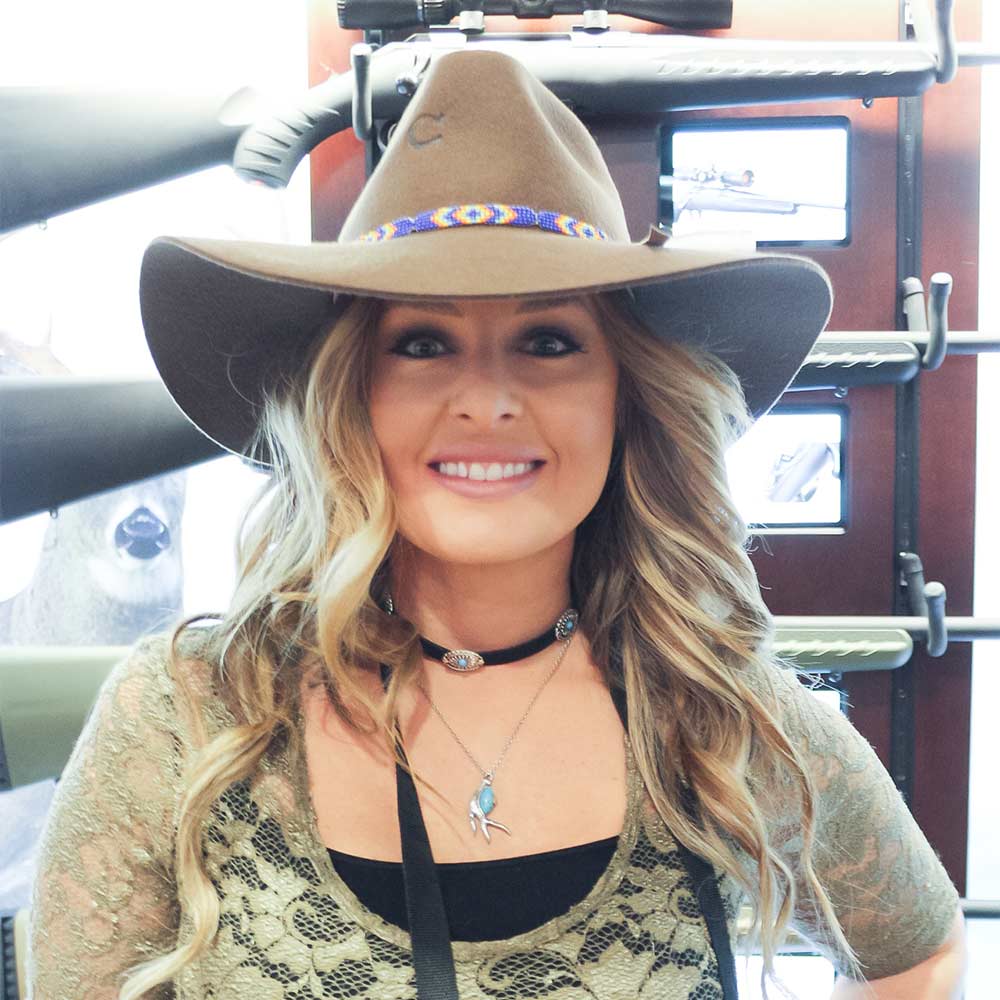 “The product that I use on virtually every hunt is the Phone Skope. Phone Skope is really awesome because it lets you attach your cellphone to your spotting scope so that you can take photos and hi-resolution video out in the field. All of the videos in my hunting show that are at a great distance are videoed through a Phone Skope.” —Kristy Titus, Host of “Pursue the Wild” and Bass Pro Shops/Cabela’s Ambassador 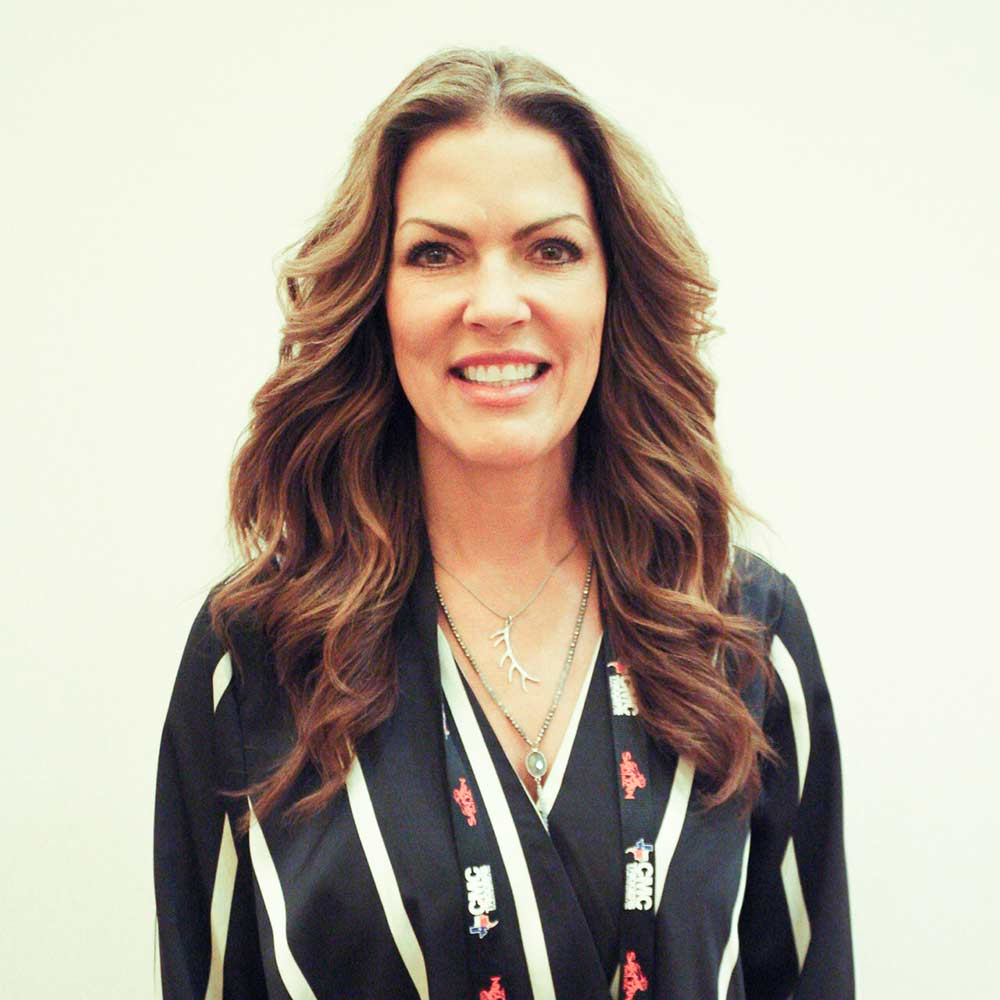 “It’s an Accu Tac Bipod for rifles and handguns. They’re innovative. I’m a prone shooter and every single one of my rifles has a bipod—but this is way sturdier. It’s more tactical looking and the pivots can dig really deep into the dirt. I’m looking forward to trying them out this next fall.” —Jana Waller, Host of “Skull Bound TV” on Sportsman Channel and Mule Deer Foundation Ambassador

“I’ve had a chance to look around the show a little bit, and I love knives. One company that really interests me here is Smith’s Company Products. They have some new knives that they’re just bringing onto the market right now. They’re the exact right length for me—because a hunting knife should be no longer than the length of your index finger. They also stay sharp.”— Larry Weishuhn, Co-Host of DSC’s Trailing the Hunter’s Moon on Pursuit Channel, Wildlife Biologist, and Outdoor Writer