The Advantages (Real and Imagined) of Carbon-Fiber Barrels

They’re lightweight and they look cool, but a C-F barrel may not be the answer to all your problems 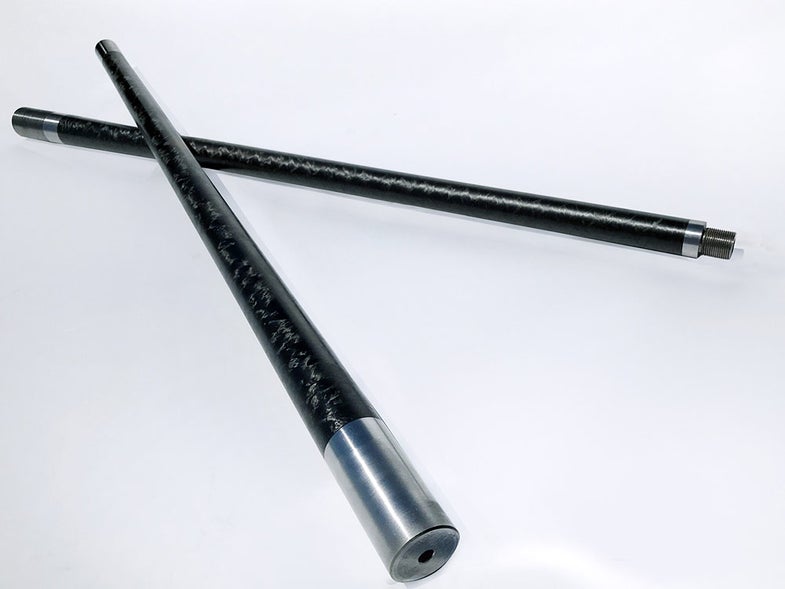 The opinions I offer in these posts are almost always formed out of personal experience that stretches back nearly to the invention of firearms. Not in this case. I’ve had some experience with carbon-fiber barrels, but not much, so you’ll have to take the following for what it’s worth.

Carbon-fiber rifle barrels, for those of you who are unfamiliar with them, are made by turning down a steel rifle barrel into a mere shadow of its former self, wrapping it in carbon fiber, and bonding the whole works together with adhesive. All sorts of advantages are claimed for the result.

The idea of sleeving a steel tube in high-tech fiber is not new. In 1960 Winchester came out with the Model 59 semi-auto shotgun which weighed only 6 pounds, due largely to a barrel which was wrapped in fiberglass. I got hold of one at the time and found that I couldn’t hit anything with a gun that muzzle-light nor, apparently, could a lot of other people. The Model 59 was discontinued in 1965, and now is commanding interesting prices on the used-gun market.

However, there are now at least three companies offering C-F barreled rifles, so the idea has found new life. Among the claimed advantages are:

So, let’s take this one claim at a time. As for drastic weight reduction, there’s no doubt about it. The claims vary wildly, but as a rule of thumb, a carbon-fiber barrel will weigh at least a third less than a steel barrel of the same diameter and length.

There’s no question, either, that carbon fiber is stiffer. The question is, how much? One maker of high-grade carbon fiber barrels says six times. Another company which does not make carbon-fiber barrels, but makes other things with C-F, says two to three times.

As for longer barrel life, there’s plenty of disagreement. C-F barrel makers say that their barrels cool significantly faster. However, there are other sources who claim that carbon fiber conducts heat much more slowly than steel. These folks claim that a C-F barrel will actually store heat unless the wrapping is done in such a manner as to release it, and that the bonding agent must conduct heat outward, which epoxy does not. You can put your hand on an improperly made C-F barrel that’s been shot a lot, they claim, and it will feel cool. However, this means that the heat is still lurking inside, and if the hot steel liner expands at a different rate than the fiber surrounding it, you’ve got trouble.

Assuming C-F barrels do cool better than all steel, the question is, how much additional barrel life do you get? And how do you calculate that figure? One manufacturer claims “around 25 percent,” which is a lot. What they don’t specify is what kind of accuracy you can expect in that extended period. Do they mean that the rifle will shoot cloverleaf groups 25 percent longer than a conventional one, or that it will hit the broad side of a barn 25 percent longer? What?

Improved accuracy. This also caused me to scratch my head. All-steel-barreled rifles are now accurate far beyond the ability of most people to shoot them, and beyond the uses to which they are put. Do you have a minute-of-angle rifle and yearn for a ½-MoA rifle? If you get a ½-MoA rifle, what will it do for you that your MoA rifle will not?

No rust. What with more and more rifles being made of stainless steel (which will rust, but only with difficulty) and third-generation chemical coatings in place of bluing, rust is becoming as obsolete as correct English.

All of this is to say that unless all you want out of life is a lighter rifle, then I am not convinced and C-F will solve your problems. That said, the C-F barrels I’ve used have performed admirably. And they look cool. On the minus side, you have cost. A good C-F barrel costs anywhere from two to three times what a steel one does. But when has that ever bothered me. If it makes you happy, buy it. This is a hobby, and if you think you’re getting a leg up on life by going high tech, why have at it, and expense be damned.