As a rural Alaskan, it seems kind of pointless to live in the middle of nowhere and be forced to... 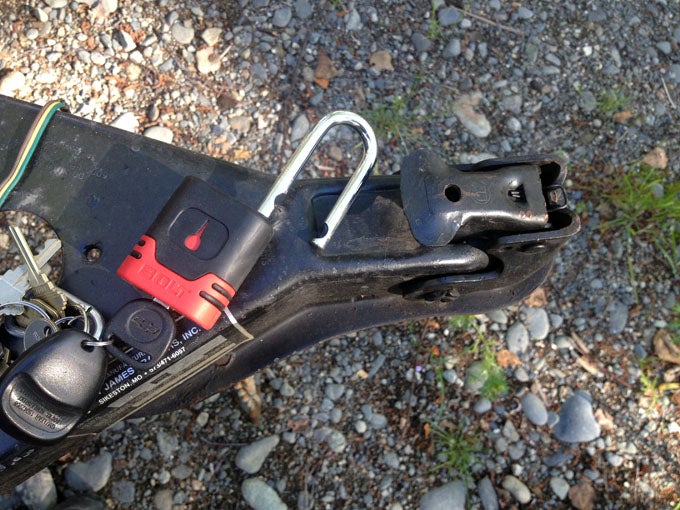 As a rural Alaskan, it seems kind of pointless to live in the middle of nowhere and be forced to lock up your ATV and everything you own.

But it turns out that ATV thefts are about as high in the 49th state, as they are in, say, Georgia. A few weeks ago I came out of a truck stop to find a guy hotly dropping F-bombs, saying that someone had pulled into the parking lot next to his pickup, unhooked his trailer, and driven away with it. The trailer had a new Yamaha Grizzly 650 strapped to it, along with a pile of building materials for his cabin.

I’m not much of a key-padlock guy. I have enough keys to carry as it is, and I don’t like the idea of keeping track of another one. My history with combination locks has been poor — they can’t take the dirt, snow, and mud that key locks can withstand.

This sent me on a quest to find an easier way to secure my gear on the road. What I found was the BOLT ATV Lock with smart key technology. The locks are pre-keyed to learn your model truck or car. So, if you have say, a 2006 Ford, you’ll need to make sure you purchase a lock that works with your specific model truck.

Once you obtain the lock, take your truck key, insert it into the new lock, turn, and pull out. That’s it. You now have a padlock (or cable) that will work with the same key that you use on your truck every day.

The locks are super beefy with shrouded rubber armour, and so far have kept dust out of the mechanism.

BOLT makes them for trailer receivers and hitches, and they have cable and spare tire locks. The pad locks start at about $20. But the best part is that you always have the right key with you. A true deal, convenience included.

And some other good news: the guy did get his stuff back a few weeks later. A security camera caught the license plate number of the dirtbag who stole the trailer. But if he had simply locked the trailer, this most likely wouldn’t have happened.

Peter Mathiesen lives, hunts, and fishes in Alaska — one of the toughest testing grounds for ATVs and accessories. Each week Mathiesen will send a dispatch from the last frontier, informing you how to keep your quad running.