Summer is snake season, so you’d better watch your step. Consider this your serpent survival guide — complete with tips on how to identify venomous species, lessons to learn from near-death snake stories, and measures to take if you are bitten. 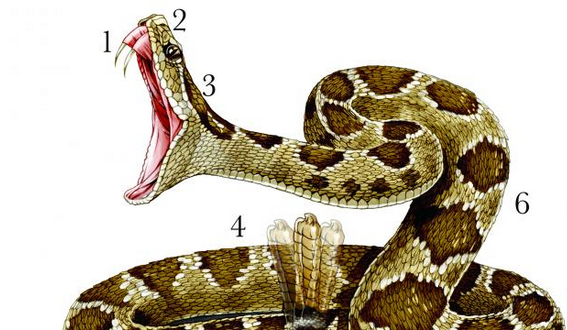 Summer is snake season, so you’d better watch your step. Consider this your serpent survival guide — complete with tips on how to identify venomous species, lessons to learn from near-death snake stories, and measures to take if you are bitten.

Before I saw the snake, I felt its bite.

Randy and Daniel were 10 yards ahead of me, checking some catfish holes in chest-deep water, when I came to a partially submerged boulder. As I tried to wade around it, I stuck my hand in the water to push against the rock for support. That’s when I felt a sting.

I looked down and a 31⁄2-foot water moccasin that had been sunning on the boulder was latched onto my right ring finger. Scared to death, I whipped my hand out of the water to yank it off. A burning sensation shot up my arm. It was as if I’d touched a hot stove.

Daniel rushed to me, while Randy swam to the boat. The ride to the ramp was only 6 miles, but it seemed to go on forever. I just wanted the pain to stop.

The nearest hospital was 25 miles away, and we must’ve driven 90 mph with our flashers on the whole way. By then my finger was absolutely throbbing—like somebody kept pounding it with a hammer. We reached the emergency room where I thought I’d finally get some help, but as soon as the doctors saw how bad my finger was, they said they’d have to transfer me to Chickasaw National Medical Center—another 45 miles away. That’s when I started to pray.

Doctors at Chickasaw gave me six vials of antivenin before deciding to transfer me again—this time to OU Medical Center in Oklahoma City, which was a two-hour drive. Between the snakebite, the painkillers, and the antivenin, I was pretty out of it. The ambulance ride was a total blur. At OU, the doctors treated me with eight more vials of antivenin—the most they’d ever given one patient. My breathing had slowed, and they put me on oxygen. That first night I was in such bad shape that the doctors weren’t sure I was going to make it. I kept praying.

Early the next morning my condition had slightly improved. The doctors were confident that I was going to pull through, but they were still concerned I might lose my hand, which had ballooned to the size of a softball. At its worst, the swelling spread all the way to my bicep. My finger looked like a huge, black, puss-oozing wart. It was the most disgusting thing I’d ever seen. I stayed in the hospital for four more days before I was released. Words can’t describe how relieved I was when the doctors told me I’d be O.K.—and that I could keep my finger.

My first night home I didn’t go to bed until 3 a.m., and then all I could do was lie awake. I kept reliving the ambulance rides and the ERs. I kept going back to the moment I put my hand on that rock. I was too scared to sleep. —As told to Adam Pincus

Most legitimate snakebite victims—those who do not deliberately provoke the snake—are struck below the knee. Other bites, like Destry Mitchell’s, fall into the over-under category. The victim was reaching either onto a ledge while climbing or under a rock. Walk heavily, tap a stick, step on, instead of over, don’t blunder about at night—and chances are you won’t get bit.

In case of snakebite: Remove watches, rings, and constrictive clothing. Keep the wounded limb below heart level and walk to the road where the best first aid can come into play—namely, car keys. Mitchell’s friends did the proper thing by immediately getting him to a hospital. However, the golden rule of wilderness first aid is: Move the patient to treatment; move the treatment to the patient. Call ahead if possible, so EMTs can meet you halfway.

WATER MOCCASIN Also known as the cottonmouth, the water moccasin dwells in Southern waterways. Its bite can cause tissue and muscle damage.

CORAL SNAKE Colorful, small, and docile, the coral snake needs to hang on and chew to inject its venom. If bitten, grab the snake and hurl it.

RATTLESNAKE The segmented rattle at the end of its tail is a dead giveaway—but not all rattlers rattle. Be watchful if you hunt or fish in their country.

COPPERHEAD The most common venomous snake in the Midwest and East, the copperhead—distinguished by its triangular head—is mildly toxic.

SUPER SERPENT: WHY THE RATTLESNAKE IS NATURE’S PERFECT PREDATOR

The rattlesnake has hollow retractable fangs that spring erect when it strikes. The fangs of an eastern diamondback rattlesnake, America’s largest species, are nearly an inch long.

The snake senses the heat of its prey through pits on the sides of its head. And the Jacobson’s organ acts as the rattler’s sense of smell, enabling it to follow prey it has struck.

The venom glands store many toxins. The Mojave has the most virulent venom; the eastern and western diamondbacks are dangerous because of the large doses they can inject.

The rattle consists of special scales, a new one added each time the snake sheds its skin. These linked segments vibrate at 50 cycles per second, deterring predators—and smart humans.

A pattern of bands, diamonds, and blotches gives the rattlesnake a suit of camouflage that is next to invisible. A rattler typically hunts in dim light, waiting patiently by the trail of its prey.

A rattler can strike at a speed of up to 15 feet per second, and two-thirds the length of its body. After a strike, it immediately releases and recoils so dangerous animals can’t attack in return.

One Final Note: A Brief Defense of Venomous Snakes

We fear what we don’t understand, and snakes remain the least understood, most maligned animals on earth, although the danger they pose is greatly exaggerated.

Appreciate snakes for what they are—one of nature’s most fascinating creatures. And consider yourself blessed in their presence, for snakes like the eastern timber rattlesnake are an indicator species, the canaries in the coal mine of their habitat. When it becomes fragmented from rampant logging, mining, pollution, road building, and human development, they disappear. What does that say about the future of the ruffed grouse that leads us to the woodland covert, or the brook trout that lures us to the mountain stream?

I, for one, would rather carry a shotgun and have to watch where I put my feet than have no reason to worry, and no birds to hunt but those that are baked from clay.