8 of the Strangest Deer Ever Taken by Hunters

From an all-black whitetail to a Booner unicorn to an ancient spike, these are some of the rarest deer we've ever seen 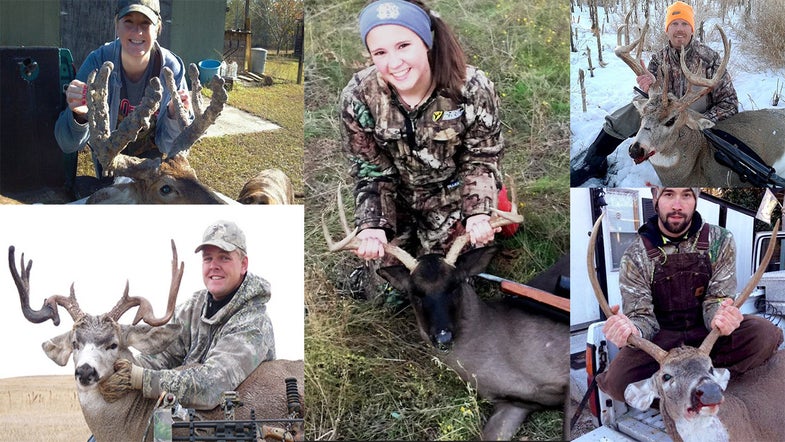 You don't see these bucks every often. Field & Stream
SHARE

Usually, a deer, elk, or moose catches our attention because of the size of its antlers. But these eight critters have stuck with us not because of their rack sizes—but because of their curious adaptations, appearances, and deformities. They are true anomalies of the wild—rarer, in many cases, than many record-book trophies. Count yourself lucky if you ever spot—or tag—one in the woods.

In 2015, while hunting in Stephens County, Texas, 14-year-old Brooke Bateman and her father spotted what they first thought was an Angus calf. Upon further inspection, however, they realized that it was a rare all-black whitetail. Not only was the melanistic 6-pointer one of the most elusive trophies in North America, it was also Brooke’s first deer.

Here’s another odd “buck” from the 2015 season. Jerika Francis thought she had tagged a perfectly normal 10-pointer—until her husband began butchering it and noticed “some parts were missing.” Much to Jerika’s surprise, the deer turned out to be an antlered doe, the result of a genetic anomaly that affects a mere 1 in 100,000 female whitetails.

For three seasons members of the Bostwick family pursued an odd-looking buck near their Georgia home. But it was 19-year-old Mary, who hadn’t hunted in several years, who at last dropped the deer, which had cactus-like velvet antlers, resulting from an injury.

Killing a Booner is rare, but killing a Booner with a third antler growing out of its head is in another league. But that’s what Curt Fischer did, when he tagged this 170-inch unicorn buck, with a 7½-inch extra point. He had spotted the deer on his trail cams the year prior, and got a shot at it the following season, dropping it at 120 yards.

Spike bucks typically don’t inspire much excitement, unless, of course, those single points happen to be 2 feet long. Dennie Bowman was lucky enough to kill this exceptional trophy, which was estimated to be a 10- to 12-year-old buck, with a rack on the way down.

Wisconsin is known for its monster whitetails, which is why, in 2015, Randy Haines arrowed one of the most unlikely bucks in state history—an impressive mule deer buck. The deer, the first muley killed in Wisconsin since 1988, likely wandered over from South Dakota, some 600 miles away.

Most hunters dream of putting their crosshairs on a buck with even just one drop tine. Mike Speaker, however, managed to drop a 195-6/8-inch triple-drop-tine buck, a true freak of the whitetail woods. Some guys have all the luck.

Justin Eckert spends most of his time outdoors guiding other hunters. He was the one, however, who got to release an arrow on this peculiar buck, the antlers of which look as though they have melted or wilted from the heat. Eckert speculates that the deer survived a serious fever during velvet, causing the antlers to develop abnormally.