Rutting of the Bulls: A Close Encounter in the Idaho High Country

Photo by Donald M. Jones We take cover, squatting beside some pines, and I begin to plot our next move... 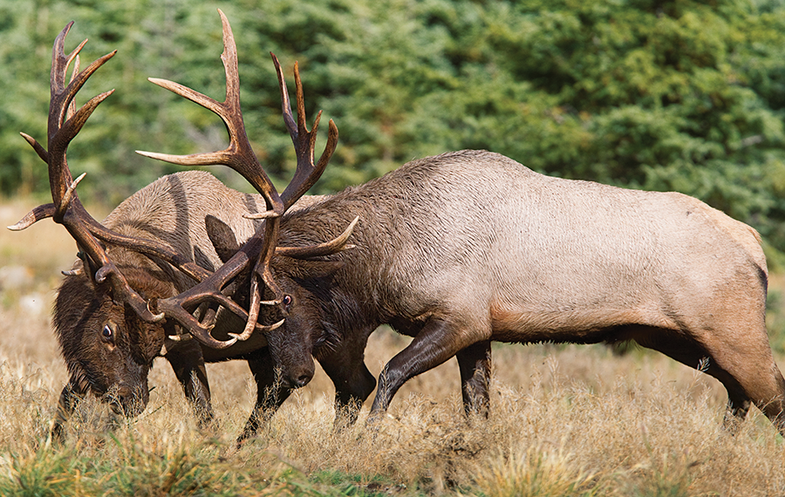 We take cover, squatting beside some pines, and I begin to plot our next move only to realize that my buddy Anthony has begun to hyperventilate. Uphill, about 150 yards away, an intense fight has broken out between two rutting bulls, and for Anthony, a first-time elk hunter, the scene and sounds of antlers grinding against antlers is almost too intense and charged to process. He looks confused—as if to say, What the hell do we do now?

What we should do is move closer, but the deadfall and knee-high brush make an undetected stalk impossible. I study our surroundings and see that our best move may be a course along the forest’s open edge. It’s a gamble because we’ll be visible, but I want us to move while the battling bulls are distracted.

I point at my butt—hunter’s sign language for I’m moving fast, so stay on my ass—and break for the open space. Hunched over and hustling, we stop at a small sagebrush bench just a stone’s throw from the frenzied elk. There’s nothing between them and us. Anthony looks at me with wide eyes, eager to learn our next move. For the moment, though, I’m at a loss. We’re hunkered at the threshold of one of the greatest scenes in big-game hunting—in nature, period—pinned in open terrain with nowhere left to scramble.

Maybe, I think, this would be a good place to make a stand.

September is an amazing time to bowhunt for elk. Why else would archers gladly sleep in the dirt and wake up at 4 a.m. to reach a ridgeline by daybreak, then climb for miles on end in rugged, punishing country for hunts that, admittedly, end in failure more often than success? Because September is when elk enter the rut. It’s when they lose their inhibition and become generally chatty, reacting to mews, bugles, and grunts. It’s when bulls, juiced on adrenaline, pick fights, giving you the chance to sneak wildly close. And it’s when I wanted Anthony to venture on his first elk hunt so he could experience the physical, mental, and emotional rush.

On our first day hunting in Idaho’s high country, we spied sign early. The white, pitch-covered scars of a bull rub on a thick pine stood out against the rest of the forest, like a single lightbulb shining in a dark room. Shredded bark and dead limbs lay scattered around it. Later, after we’d separated to scout different basins, I heard the raspy echo of a bull, which helped me pinpoint a few elk dotting the opposing mountainside. At camp that night, Anthony and I chewed over reports and strategy. Morale was high.

The next morning started dead calm. I could hear the faint whoosh from a raven’s wings long before I could see the bird overhead. I told Anthony that this was my favorite time to spot the contrasting silhouettes of shifting wapiti—before the sun could create shadows and optical illusions. We spotted movement early and beelined for a distant swath of old-growth forest.

The bulls keep battling. Anthony and I can hear their grunts and smell the musk, but the rangefinder pinpoints the conflict at 75 yards—still too far for a clean shot. I grow concerned that we’re too exposed; that I set us up to fail. Then again, on elk hunts I frequently opt for openness over shuffling in or around trees and bushes and maybe compromising a shooting lane in the process. I know it’s counter­intuitive to hunting strategies where concealment is crucial, but in the right situation, like when September bulls are jostling for dominance, I’d rather trust my camo to do its job than force myself into a position that negates a shot. Often I’ll carry a collapsible elk decoy for these very situations. The decoys are light, easy to set up, and perfect for persuading elk in open country. But I failed to bring one on this hunt, so Anthony and I must stay put and hope for the best.

The clash lasts several minutes before ending in a stalemate. With no clear victor, I begin to worry we’re to blame. Did they smell us? Are we less concealed than I thought? Anthony also senses something is amiss but still prepares for a shot. He leans close to the ground and draws his bow behind the sagebrush. After he slowly sits upright, I make a soft mew with my cow call, and one of the bulls turns his head and bugles back.

The bull closes the gap with only a few strides before he stops. He is hot and bothered, and it’s clear that he’s not looking for us. He wants the cow that made the call. I suddenly feel invisible. Forty yards out, the bull adds a little bounce to his strut, posturing to impress the mate he’s convinced is out there. His eyes still have that rut-crazed, ready-to-fight gaze. He may trample us yet.

I’m ready to flinch when I hear the unmistakable whack of a kill shot. The bull spins and retreats a few steps before he crashes to the ground. Anthony’s emotions boil over. He’s shaking and says he doesn’t know whether to laugh, cry, or simply take a moment to compose himself. It’s a common reaction that befalls most elk hunters—first-timers and veterans alike.

I tell him to do all three.