We tested 14 arrows to find out which make the best hunting shafts. 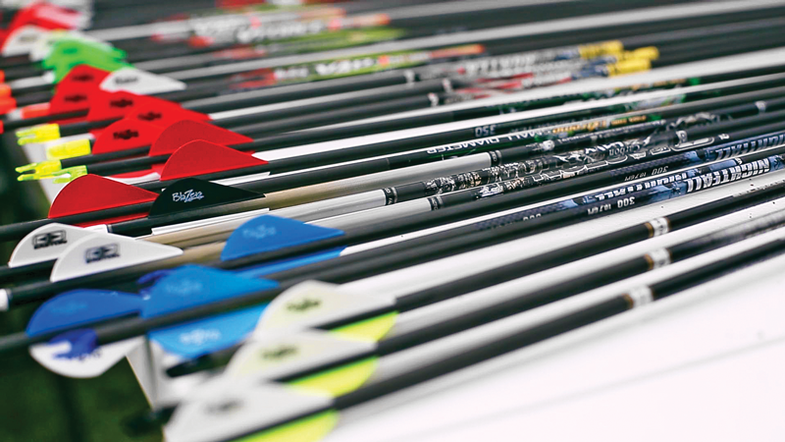 What makes a perfect arrow? Flash-point velocity? Bone-crushing energy? Needle-like diameters? After thee days of testing today’s newest arrows to learn which deliver the best field performance, we arrived at three models—each in a different weight class—that shot beyond the rest.

Each winner delivered the highest retained kinetic energy and momentum in-class at 40 yards. Simply put: they were the most efficient shafts—maximizing the energy your bow sends downrange, regardless of draw weight.

Gold Tip set the test on fire with an average velocity of 321.43 feet per second. Grain-for-grain, the Velocity XTs packed more punch than any other in its weight class, including heavier arrows. They also had a lower drag coefficient than arrows with smaller outer diameters, meaning they hit harder downrange than even some of the smaller, diameter shafts with similar grain count.

Bottom line: The Gold Tip Velocity XT is the most efficient speed arrow we tested, perfect for archers who need a flat trajectory for longer shots.

The smallest micro-diameter arrow in the test, the V1 had the highest front-of-center percentage (14.17) thanks to its 50-grain Penetrator 2 insert. These arrows proved the fastest in class, but really shined in downrange performance, hitting like shafts weighing 10 to 20 grains heavier.

Bottom line: The VAP V1s dominated in the sweet-spot weight class for most bowhunters.

The heavyweight match came down to a split decision. The Pile Driver wasn’t the fastest in its division nor did it hit the hardest, but grain-for-grain it was the most efficient. The highly regarded (and redesigned) Easton Full Metal Jacket was a close second, but at more than 25 grains lighter than the FMJ, the CE hit with more KE and was neck to neck in momentum.

Manufacturers were asked to submit two sets of new-for-2014 hunting arrows in a variety of weights, each with 2-inch straight-fletched Blazer vanes and standard factory inserts able to accept an 8/32 field point. Cut to 30 inches, the 14 submitted models were test shot with a 70-pound Bowtech RPM 360 drawing 30 inches, secured in a Hooter Shooter, and into a Hips Archery 4×4 Range Target set at 40 yards—no less than three times. Ballistic data on each shot was recorded using Full Flight Technology’s Velocitip system, which captured velocity, kinetic energy, and momentum on launch and impact, plus drag, time of flight, and trajectory. With this data we crunched the percentage of retained energy and retained momentum. All arrows were weighed; their diameter measured with a micrometer, and a front-of-center percentage was calculated. That was how we determined these best-in-class bowhunting shafts, but don’t take our word for it. Take a look at the full dataset.

– Velocity, Kinetic Energy and Momentum at Launch are averages of the total six shots.

– Velocity, Kinetic Energy and Momentum at Impact at 40 yards are averages of the three shots at that distance.

– Velocity, Kinetic Energy and Momentum at Impact at 80 yards are averages of the three shots at that distance.

– 32.174 is standard acceleration due to gravity

– Drag is how quickly an arrow slows down. The higher the value the more quickly it slows.