Divers Down: How to Hunt from a Layout Boat 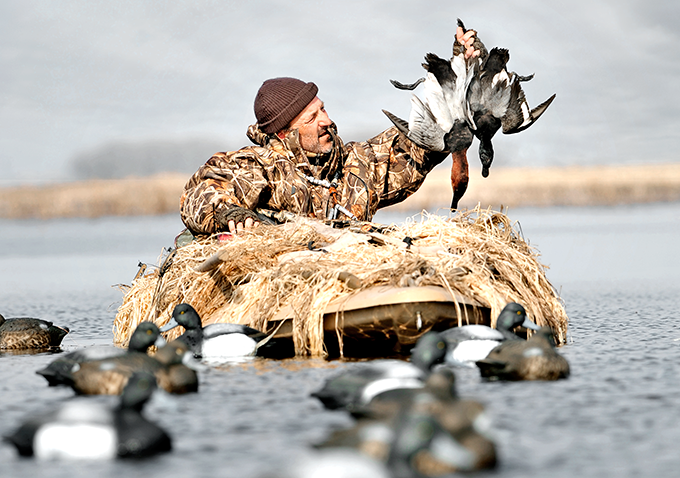 Layout boats vary in style and price, but they are all designed to do the same thing: keep you low to the water to reduce your profile while providing a stable shooting platform. Waiting in one of these fiberglass tubs that’s been pulled into open water by a tender boat is uncomfortable, lonely, and cold. But you get over it fast when you’re firing at divers one after another at 5 yards. Here’s the setup.

Snap To It
Adding gang-rig clips to each of your decoy lines makes deployment, adjustment, and storage, well, a snap.

Bar Scene
Divers raft in large flocks to feed offshore, so they aren’t difficult to find with a boat and binoculars. But there’s more to scouting than just seeing birds. Watch the ducks carefully to determine precisely where they’re diving and feeding. Often, it’s on a submerged sandbar where they can gobble up snails and mussels.

Gang’s All Here
You need a big spread to decoy open-water divers, and for that, gang-rigged lines are the way to go. Keep the heads of the decoy lines close together on the upwind side, but spread the downwind ends 10 to 15 yards apart, like spokes on a giant wheel. This gives ducks room to work between the lines, while the cluster of upwind decoys holds their focus.

Set Shot
Don’t anchor the boat in the center of the spread. Positioning slightly off to one side ensures that committed ducks aren’t looking right at you. Offset the bow slightly to the right to accommodate a right-handed shooter’s swing, and vice versa for a lefty. You may find that the ducks prefer a specific part of the spread on a given morning. Don’t be afraid to adjust. Divers rarely circle; instead, they commit low and fast. The secret to successful shots is not moving too quickly. Most times, the birds won’t even notice as you slowly sit up, deliberately shoulder your gun, and squeeze off your shot.