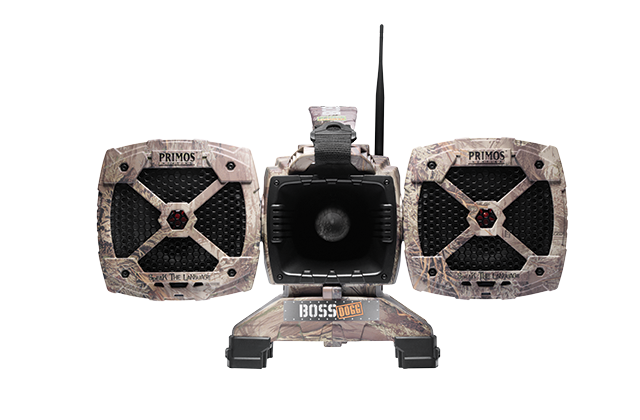 To test volume, I played each call in turn on a (rare) calm day in western Nebraska, cranking each to 10, using a standard rabbit-in-distress call. I walked away until I couldn’t hear the call anymore, then used a rangefinder to note the distance. I also cycled through the settings on each remote at the manufacturer’s stated operating distance and beyond. The realism of the sounds were judged by me and two other experienced predator hunters. Weights were measured on a digital kitchen scale, with remotes, accessories, and all batteries in place.

SPECS 10 preprogrammed and 20 downloadable sounds • SD card slot • 100-yd. remote range • 1 lb. 12 oz.
THE LOWDOWN Though not especially loud, this inexpensive call was one of the best sounding in the test. Its remote is unwieldy and not perfectly intuitive to operate, but the display was the largest and easiest to read. A built-in microphone allows you to record your own mouth calls or those of the best caller you know. My unit totally quit working anytime the remote got more than 25 yards away from the speaker.
HITS Great sound for a single-speaker call. Value-priced.
MISSES It does the job but looks and feels more like a toy than a serious hunting tool.
WHO SHOULD BUY Any predator hunter on a tight budget. Or the guy who loves the sound of his mouth call but wants it in an electronic, remote-operated form.

SPECS 100 preprogrammed sounds • 4GB internal memory • “Several hundred”–yd. remote range • 2 lb. 15 oz.
THE LOWDOWN The Fusion has lots of volume and loads of features. In addition to the 100 sounds, the call comes loaded with a dozen full calling sequences and room for you to record 13 more of your own. A feature called FoxBang switches to a preset call at the sound of a gun blast (to stop a missed dog). Another acts as an electronic hunting journal, recording calling data, weather, and time of the shot. I could hear the call and use the remote slightly beyond 450 yards.
HITS Sound quality is excellent, as is the remote display.
MISSES Instructions are worthless, and the number of menu options may be a bit much for the average hunter.
WHO SHOULD BUY The tech-savvy hunter who wants serious volume and versatility in a highly portable package.

SPECS 100 preprogrammed sounds • 4GB internal memory • 200-yd. remote range • 14 lb. 6 oz.
THE LOWDOWN With a trio of 6-inch speakers, two of which rotate 180 degrees, the Boss Dogg is very loud. It was the only unit I could still hear, and control, past 500 yards. The Dogg also had the best remote, with a color screen and intuitive menus, plus a separate powered decoy unit. It can even play music should the hunting slow down enough for a quick breakdancing battle.
HITS Expert Hunt mode plays full calling sequences recorded by pro predator hunters.
MISSES It is heavy, takes 15 batteries, and isn’t cheap.
WHO SHOULD BUY The hardcore hunter willing to pay for good versatility and maximum volume and distance—but who won’t stray too far from the truck.

SPECS 400 preprogrammed sounds • 4GB removable SD card • 250-yd. remote range • 4 lb. 7 oz.
THE LOWDOWN The Stalker 360’s motorized, swiveling speakers turn independently and can be set to emit separate sounds. All that control takes deft thumbs, but the remote is intuitive with easy-to-understand icons and clear, if somewhat small, readouts. The preloaded sounds offer a huge variety of calls, sequences, and species (including bear and snow goose). The remote stopped working at 250 yards, as advertised, but I could hear the call from almost 300.
HITS Hunters can build a list of favorite prerecorded calls, which eliminates a lot of menu scrolling.
MISSES Auto-off function failed, costing me $10 in batteries.
WHO SHOULD BUY The wide-ranging hunter who wants maximum versatility and ultimate control at his fingertips.

Now that you’ve got the gear. Check out these tactics for Close-Quarters Coyotes.