Off-Road in Baja: Riding the 500 With Bryce Menzies and Jesse Jones 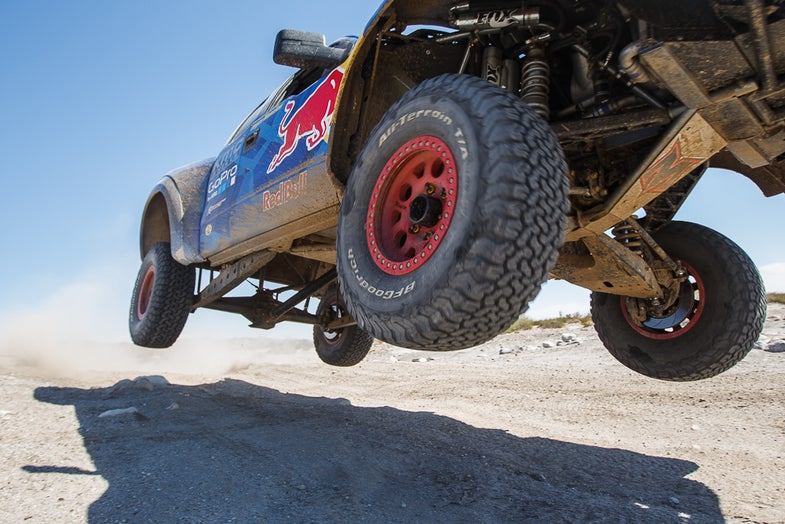 The Baja 500 starts tomorrow, June 6th. Late last month I spent three days in Mexico pre-riding the course with two of the best drivers in the race. The trip came courtesy of BF Goodrich, which wanted to show off some tires it had installed on the trucks. Pre-riding has little to do with hunting or fishing, but Baja is spectacular, and off-roading there is as good as it gets. I told myself I’d pick up some driving tips that our readers could use and said yes.

The drivers were Bryce Menzies and Jesse Jones. Menzies is off-road’s rising star, a tall, good-looking 27-year-old from Las Vegas who is shooting for his fourth win in the past five years. Jones is Menzie’s teammate and mentor. He’s a successful businessman who made his fortune in the aerospace industry and has been racing in Baja since the early 2000s.

On this trip, a camera crew from Mad Media was following the drivers to capture video of what it’s like to prepare for this race. Lead by creative director Matt Martelli, they carried all their gear in two Polaris Razors, 4-seat XP1000s set up with aftermarket suspension, custom wheels, and light-truck All-Terrain T/A K02 tires, also from BF Goodrich.

The Baja 500 course changes each year but always starts and ends in Ensenada, a small city on the Pacific coast about two hours south of San Diego. The route crosses a huge variety of terrain, including dry lake beds, thick desert scrub, boulder gardens, cobblestone beaches, silt-filled washes and sharp fins of volcanic rock that can shred tires like cabbage at a street-side taco stand.

Pre-riding is how drivers learn to race this course. They’ll spend three weeks riding it over and over, memorizing turns, planning places to pass, and marking dangerous obstacles on the Lowrance units mounted into their dashboards. The trucks they’re driving are called pre-runners. These are street-legal versions of the vehicles they’ll use in the race, heavier but more comfortable, with windshields and air conditioning to make the long days spent scouting bearable.

I spend most of my time in Jones’s truck. We have intercoms installed in our helmets so that we can talk over the growl of the engine, so I hear when he sees something dangerous. An indrawn breath, a quiet “whoa.” Unexpected boulders loom just on the edges of the trail. Downed tree trunks felled by lightening hide deep gullies around blind corners. Then there are the holes. “We call the really big ones G-Outs,” he says. Bottom out in one of those and your suspension unloads, bouncing your tires off the ground. Bad mojo when you’re traveling at 80 miles an hour.

He marks these spots with a skull and crossbones icon on his GPS – two icons if it’s a bad one — but says he’ll remember most of it on his own. “I have a terrible memory for almost everything,” he says. “Tell me your name and I’ll forget it right away. But the road? That I remember.”

Jones’s truck is powered by a Chevy LS engine that punches out 750 horsepower. The first thing he does on the way out of Ensenada is powerdrift the exit ramp that leads to Ojos Negros. A few miles later we’re growling east at high speed up a stretch of paved mountain switchback. We come screaming around a corner to find a rusting white semi crawling up the slope in front of us. Jones doesn’t even slow down. He drops the truck into a lower gear and punches the accelerator, flashing past on the inside of a tight turn. It’s not a blind corner, but it’s close. “If you see an opportunity like that you have to take it,” he says. “On these roads you might get stuck going 20 miles an hour for fifteen minutes before you get another chance to pass.”

Jones says that when you want to pass a racer in front of you, you tell him by running up and bumping him gently. If he doesn’t get off the road, you do it again, this time smashing into the rear of his truck and accelerating to push him off the course. He says there are some guys who make a point of never getting out of the way. With them he’s a little less gentle.

Part of what makes racing in Baja such a challenge is that the course is not closed. Racers have to watch out for slow moving jalopies carrying water tanks, watermelons, schoolkids. Spectators crowd around jumps, barely scattering when approaching trucks land. Livestock wanders across the road. Locals build booby traps on the course, flooding fields, digging pits, and piling waist-high walls of rock across the trail, then camping out nearby to watch the racers crash.

Jones says one way to deal with the traps is to crank your wheel hard over, skidding the truck sideways to scrub off speed, then turning back at the last minute to hit head-on as slow as possible. Time this wrong and your truck might flip, bouncing end over end and strewing parts across the countryside. He calls this kind of crash a yard sale.

In the afternoon we buy tamales from a woman who is selling them out of her backpack. The difference between the racers and the rest of the population is pretty stark. Some Mexicans compete, but most of them are wealthy farmers. You have to have money to fund a truck. Jones says he’ll spend $65,000 of his own money just in logisitics, setting up pit crews and other support that’ll help him complete the race.

Meanwhile, rumor has it that a workers strike may shut down the course on the day of the race. They’re fighting for a boost to the minimum wage, currently just .40 cents an hour. With such income disparity you’d think the racers would get a lot of stony looks, but instead they’re celebrities down here. Off-road racing is like Baja’s national sport. Every time they stop they get mobbed, surrounded by crowds of kids (and sometimes grownups) who want racing stickers they can slap on their own vehicles.

The worst stretch of the course comes just east of the town of Rumorosa. It’s a 7-mile goat path that twists back and forth down the sheer face of a 4,000-foot cliff. The road is so narrow that even Martelli’s Razors have to make 3-point turns around the switchbacks. A strong wind rocks the trucks as we make the descent, hissing through the cactus needles like an angry cockroach. “Everywhere else we go, if you go off the course? Maybe you get stuck,” says Jones. “Here you could end your life.”

Late in the evening we stop in San Felipe to sleep in a beach hotel. The tide is dropping fast and there are fish breaking bait just a few hundred yards off shore. It makes me wish I’d brought a surf rod. Instead we stay up late, drinking Tecate and listening to the drivers tell crash stories.

To hear them talk, folding up a truck is no big deal. And maybe it’s not. Trophy trucks are built around tough cages designed to protect their passengers from all but the worst pile-ups. But dancing with death seems to be part of this race, or maybe a part of what makes you a racer. It reminds me of bullfighting. The closer and more gracefully you can ride the edge, the more likely it is that you’ll win the glory. Maybe that’s why the sport is so big in Baja.

As for tips for basic off-road driving? The best one came from Menzies co-driver, Pete Mortensen, one of the best mechanics in the business, a super-fit gearhead who can change one of Menzies’ 140-pound wheels in less than a minute-and-a-half. “Drive slow or you’ll break stuff,” he says.