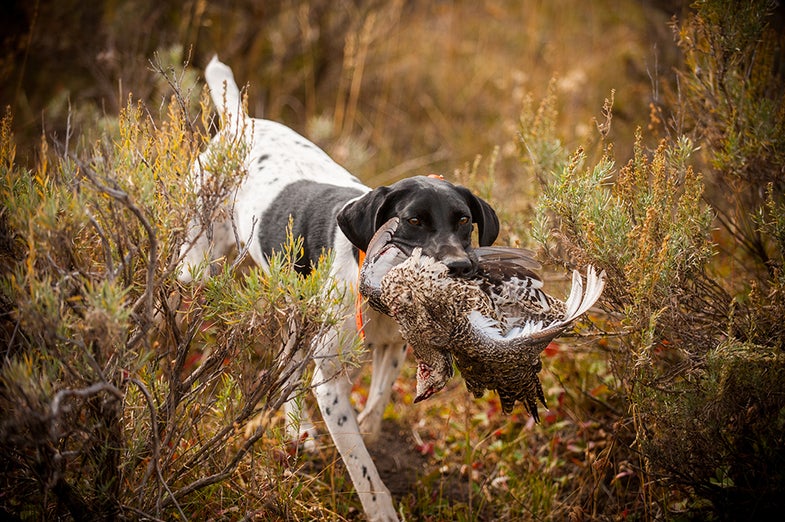 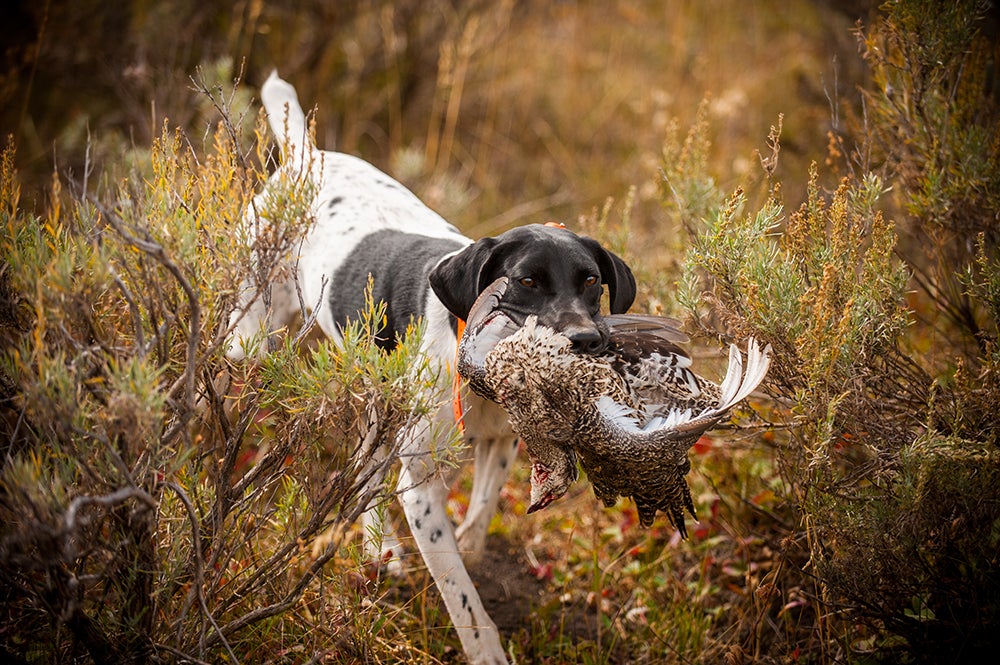 A pointer retrieves a sage grouse in Montana; Photo by Brian Grossenbacher

By midmorning, the high plains of central Montana shimmered with heat. I had to wipe my forehead every few minutes to keep the sweat out of my eyes—and dreamed about a certain ice-cold beverage in my future. But Tina, my orange-speckled English setter, was unfazed by the conditions. She couldn’t find birds fast enough. Refreshed by an occasional squirt of water, she energetically quartered the grassy flats, probed the brushy coulees, and inspected the sidehill plum thickets as if she were playing connect-the-dots. Her tenacity paid off, too, with bang-up points on a tightly wadded covey of Huns and a scattered flock of sharptails.

Pulling birds out of his vest back at the truck, my friend Bob West was all smiles. “Your dog put on quite a show,” he said. “She didn’t let up for a second.”

“Thanks,” I said, tugging at the cockleburs snarling Tina’s ears while she stood stoically on the tailgate. “We logged a lot of miles on the bike trail before the season.”

“You can sure tell you did something,” West said. “Dogs don’t get in that kind of shape by themselves.”

Conditioned Response
The city where I live has a little football club you might have heard of—the Green Bay Packers. Every summer around the first of August, the team gathers for training camp. For the rookies, training camp is all about survival, but for the veterans, it’s where they knock off the rust, hone their skills to a gleaming edge, and work their way into playing shape. It’s the same with the hunting dogs that point, flush, and retrieve birds for us. The six to eight weeks leading up to the season opener are when we prepare our dogs—mentally and physically—to perform to the best of their abilities.

Keep in mind that training and conditioning are complementary, not synonymous. You train to mold behavior. You condition to promote stamina, resistance to injury, and overall fitness. An experienced gun dog may require very little preseason training to hunt effectively come opening day, but all dogs benefit from preseason conditioning.

In Tina’s case, the only field training she gets prior to the season is a session or two on planted quail. It’s basically a staunchness refresher, and as soon as I’m satisfied that she’s reliably holding her points, we’re finished. Pen-raised birds will tolerate indiscretions that wild birds simply won’t, and I don’t want Tina to develop any sloppy habits. When she gets that first whiff of scent from, say, a ruffed grouse, she needs to be razor-sharp.

Something Tina gets year-round, however, and which I’m convinced all gun dogs will benefit from, is a daily refresher on basic obedience commands: whoa, heel, come, kennel, and so on. It’s not a formal lesson; just what transpires in the course of a typical day. When she and I go on our walk through the neighborhood, there are multiple opportunities to use heel and whoa. When playtime in the backyard is over, come is followed by kennel. Again, it’s all about instilling and reinforcing sound habits, because a dog that is obedient at home is more likely to be biddable and responsive in the field or blind.

On the preseason conditioning side, the important thing isn’t so much how you exercise your dog, but that you do it, period. That said, the gold standard has always been roading—that is, running with your dog in harness and pulling her against varying degrees of resistance. You can road from a horse, a four-wheeler, or a bicycle, as I do with Tina, which has the added benefit of helping me get into shape, too.

In early August, we’ll start to hit the bike trail three or four times a week, gradually ramping up from a leisurely couple of miles to 5 miles at a brisk pace. In addition to building endurance, this roadwork toughens Tina’s pads—a make-or-break consideration for a dog that may cover 10 to 20 miles in a day’s hunt. Another drill I like to do every so often is take Tina to a pond to retrieve bumpers. The retrieving practice doesn’t hurt, but it’s really just a way to mix up the routine while still giving her a solid workout. For the typical gun dog, a program that combines roading and swimming is ideal.

It’s worked for Tina. On that same Montana hunt, she and another superbly conditioned setter, a male named Teigen, faded from sight on a blazing sagebrush steppe. West and I crossed one rise, then another, and finally a third before we caught up with the dogs, both standing like monuments on as thrilling a point as I’ve ever seen. The sage grouse rose with a sound like rolling thunder. A pair of quick shots followed—POP-POP—and two of the big birds came crashing down.

The dogs had done their part, and we’d done ours. Though there was now some heavy lifting to do—the truck was a long way off—I couldn’t imagine a better start to the season.