Photograph by Jeff Wilson. I missed the buck on a mountain in Southeast Alaska that was only 6 miles from... 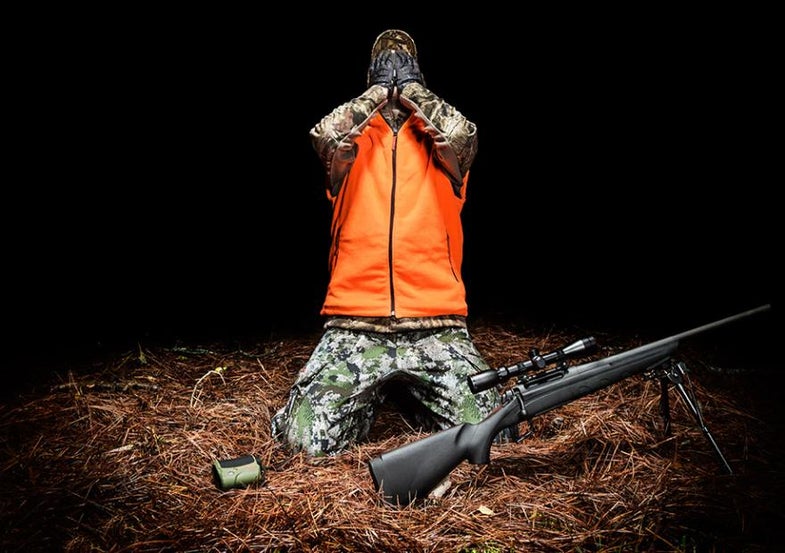 I missed the buck on a mountain in Southeast Alaska that was only 6 miles from my cabin. But with the impassable cliffs and the overwhelming thickness of the rain forest, it might as well have been 600 miles away. The only way up there was to charter a floatplane to a lake just below timberline, which I’d done. From there I backpacked upward into the subalpine zone in search of blacktail deer for the next five days.

I discovered the buck on the third day. Or rather, I should say that the buck discovered me. I was working along the top of a cliff edge that dropped down toward a lake. It was rough ground, with open hilltops that were surrounded by nasty tangles of head-high brush. I was headed toward a prominent knob from which I could hopefully glass a distant animal, but suddenly here was this bruiser of a blacktail—easily the biggest I’d ever seen, and I’d seen more than a few—running away at 75 yards.

This wasn’t how things were supposed to go. When I’d hunted similar terrain before, I never had a problem finding bucks without spooking them. They’d usually be 500 or 600 yards away, feeding on a neighboring hilltop and completely at ease. But by the time I’d chop that distance in half in order to make a shot, usually by crossing some brush-choked hellhole, the buck would be long gone.

The solution, I figured, was technology. I got a long—barreled rifle fueled by handloaded ammo, fitted with a bipod and a scope with exposed turrets. The key to this setup was a laser rangefinder. Once I glassed a buck, it wouldn’t matter how far away he was. I’d just zap him with the laser, dial the scope to the precise distance, and shoot him dead. Simple as that.

When I think about that big blacktail buck, which is something that I do pretty much every day, I realize that he first stopped at less than 200 yards. There isn’t a doubt in my mind about that distance. But I’d be damned if I wasn’t going to range that thing with my new laser first, so I fiddled away precious seconds by getting the rangefinder out of its case and wiping condensation off the lens. By then the buck was moving again. He stopped a second time at a laser—certified 250 yards, a perfectly doable shot if I’m prone and using my backpack for a rest. But I was now trying to employ my telescoping bipod, which was giving me fits. The buck moved again and then stopped for a third and final time at 360 yards. I dialed the scope to the appropriate distance and then blasted a chip from a rock face well over the buck’s back. After the deer turned and vanished in a final flash of antler, I realized that I’d accidentally dialed the scope for a 560-yard shot.

Had I killed that deer, I would have cleaned the skull and put it on my mantelpiece. I would have built a good story around it over time, something with a nice moral lesson about perseverance or the mastery of skills. Instead, the only moral to be drawn comes from the chipped rock that I left in the mountains that day: No matter how sophisticated our technologies become, they will never—despite the wishes of their proponents and the worries of their detractors—replace our brains.