Be Ready When Bobwhites Explode at Your Feet

Illustrations by Steve Sanford A bird dog locked on point has done its job. The rest is up to you.... 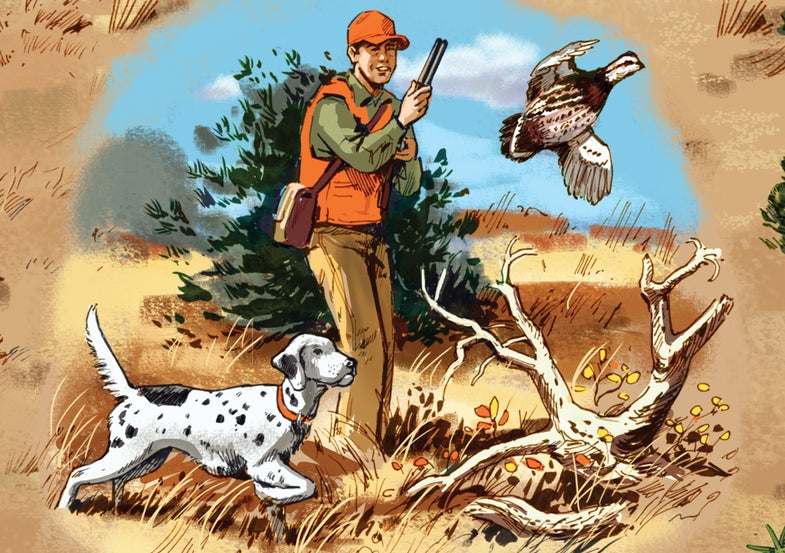 A bird dog locked on point has done its job. The rest is up to you. Walking in to a point requires a quick analysis of shooting scenarios and safety considerations. Wade Meacham, head guide and dog trainer at North Carolina’s Webb Farm, details the game plan for holding up your end of the bargain.

Forward Thinking
Getting your feet into a good position is tough in heavy cover, but if possible, shift your weight forward so you’ll lean into the rise. That way, recoil has minimal effect on your second shot.

Trust the Nose
The human nose has about 6 million olfactory receptors. A dog’s? Up to 300 million. “Always trust the dog, and work every point like it’s going off live,” Meacham says. In the right conditions, a good dog can point a bird from 50 yards away, but most birds will be within 10 yards.

Figure the Wind
Don’t just jump out of the truck and start hunting. “The easy place to enter a field might not be the best place,” Meacham says. You want the wind in your face or crossing, never at your back. “It’s worth taking the dogs through the woods for 10 minutes to enter a field with a favorable wind.”

Hold the Line
“Approach the point together with your hunting partners, and stay in line so that no guns are too far forward,” Meacham says. Your safe shooting arc extends straight ahead and out 90 degrees away from the opposite gunner. For safety, decide beforehand if the group will shoot birds that fly behind the line.

End Game
Be prepared for the tail-end Charlie—that one bird that frequently sticks around after the flush. Have your shells accessible. “The guys who kill the most birds,” Meacham says, “are often the ones who reload quickly.”

Watch the Back
When one dog sees another dog on point, it should point as well. That’s called backing a point, and it prevents the second dog from bumping the birds. Try not to walk too close to or in front of a backing dog; you could break its concentration.

Plan the Shot
Most birds will fly to heavy cover, winging with the wind if possible. Anticipate the flight path and visualize where you’re going to stop for the shot. “You don’t want to post up in brush where you can’t swing or with a big tree close,” Meacham says. “Birds know to put a tree between you and them pretty fast.”

One at a Time
Most people rush their first shot. “Quickness counts,” Meacham advises, “but you do have some time, so tell yourself as you walk up: Relax. Find one bird and shoot one bird.” Don’t switch birds until the first one falls.

[1] Dan’s Hunting Gear Duck Shirt
The duck refers to the cotton cloth on the shirt’s torso, but the brier-proof arms, shoulders, and chest let you push through the nastiest cover. $57; danshuntinggear.com

[3] Chippewa 17-inch Briar Pitstop Snake Boot
Many snake boots are stiff and chafing. These are not, and I pushed them hard. They’re waterproof and very comfortable. $310; chippewaboots.com