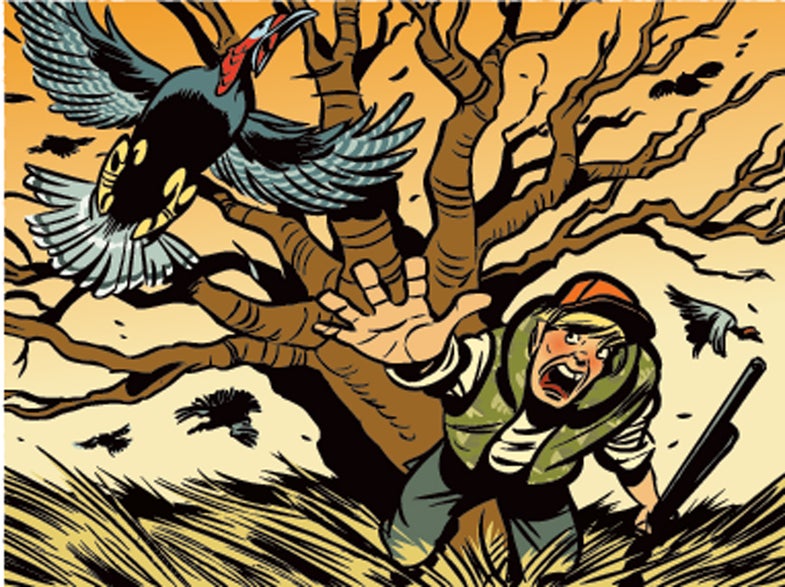 Q: Have you ever been truly spooked in the outdoors?—Mariah Thomas, Elko, Nev.

A: In 1976, while hunting in south Texas, I unwittingly walked under a live oak that was a roost tree for several hundred turkeys. The dirty bastards all took off in the same instant, gobbling and flapping and crapping, and I was not normal for weeks thereafter.

Q: Can you recommend a gun-friendly country to which I can flee following the coronation of Her Imperial Highness? —Kevin Brackett, via e-mail

A: There are countries that are fair and even-handed toward gun owners (New Zealand leaps to mind), but none offers the kind of freedom we enjoy here. My guess is that during Her Imperial Highness’s first reign, she will be so busy deflecting scandals, trying to keep her husband under control, and socking away the occasional dollar, that she will not have much time for us. Her Imperial Highness will, of course, make use of the standard antigun rhetoric and blame firearms for everything from the Black Death to disco.

Q: Who is your favorite superhero? —Freddy Manford, York, Pa.

A: My favorite is the Toxic Avenger, a.k.a. Mop Boy Melvin Junko, the only superhero from New Jersey. Only a few can relate to a hero like Captain America, who looks like Chris Evans. Toxie looks like a puddle of puke, and anyone can identify with that.

Q: On an elk hunt last fall, my guide said I should be prepared to shoot at least 600 yards with my .30/06. I wasn’t, and didn’t kill an elk. Is this common? —Harlan Montgomery, Augusta, Ga.

A: No. The so-called guide should give you your money back. Requiring that you shoot at over 600 yards is completely nuts. The job of a guide is to try to get you within a range where you can hit. No exceptions, no excuses.

Q: Why do people get so excited about the 6.5 Swede’s long, heavy bullet when you can get nearly any bullet you want in nearly any cartridge? —John Mertz, Minneapolis, Minn.

A: I own a 6.5 Swede and shoot long, heavy bullets, but I don’t get excited about them. The cartridge is popular simply because it is the -lightest-kicking round that will put down even really big animals. (The Swedes kill moose with it.) The recoil would not knock a sparrow off a thistle, but I would take the Swede to Africa with no qualms.

A: I would not mount a Picatinny rail on the hood of a Lamborghini, or on a Fender Stratocaster, or on a Piotti shotgun, or on any rifle except a tactical one.

A: Bolt-action rifles are more accurate than levers and pumps, and they used to be more accurate than autos, because they had better triggers and greater rigidity and vibrated in a more controlled and consistent pattern. However, I am now seeing ARs that will shoot along with anything but the best benchrest bolt. So you can take autos out of the equation.