Are you using the right oil in your ATV? Oil is often an afterthought for most ATVers, but it can... 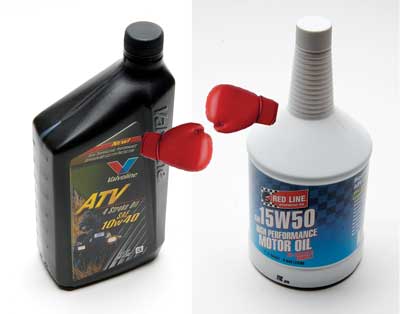 Are you using the right oil in your ATV?

Oil is often an afterthought for most ATVers, but it can actually make or break your machine. Obviously you wouldn’t run your quad without oil in it (because you wouldn’t make it too far), but should you use synthetic oil, or will conventional oil do the trick?

The basic breakdown is this: Synthetic oils are designed to withstand higher engine temperatures, reduce friction on engine parts, and resist thermal breakdown. Synthetic oils, because they are engineered, are made up of uniformly sized molecules, unlike conventional oil, because it comes from naturally occurring crude oil, which is made up of a collection of varied molecules (and the smaller molecules can evaporate when the engine gets hot). But, synthetic oil can also cost up to three times as much as conventional motor oil. Conventional oils do all of that to a much lesser degree and may contain trace amounts of contaminants. There are arguments for and against each type of oil, but the real catch is cost. If you are willing to pay more for synthetic oil, then your quad is probably better off with it than with conventional oil. But if you are like most ATVers, conventional oil works fine and fits nicely into your budget.

Cons: Costs up to three times as much as conventional oil, should be used at the beginning of an ATV engine’s life (not on an old engine).

Pros: Easy to find, easy on the wallet, gets the job done.

As always, you can leave your opinion at the bottom to let us know which side of the great oil debate you fall on.