The worst outdoor moments of 2003 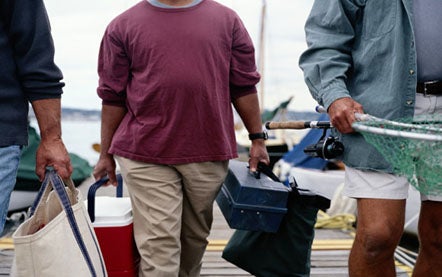 A guy I know actually did the following things this past year: * Locked himself out of his car (twice). * Dropped a brand-new Leatherman Wave into 24 feet of water while attempting to remove a hook from a middling-size bluegill. * Ended a goose hunt when he tried to jam the guide’s 10-gauge shell into his 12-gauge gun. * Blew a bow shot at a stationary 6-pointer after deciding that 16 yards looked more like 30. * Got stopped by a cop for erratic driving at 5 a.m. after spilling 20 ounces of extremely hot coffee in his lap region.

The guy was me, a fellow with the physical and mental abilities of that noted outdoorsman, Elmer J. Fudd. The good news is that I am not alone. There are millions of us out there. And it’s time we stood up and said to the world, “Get used to it. We’re here, we’re inept, and we have no intention of changing anytime soon.” To that end Field & Stream is inaugurating the Elmer Awards to celebrate those who allow millions of sportsmen to experience a feeling they would otherwise never know: smugness. This year’s entries include the government (surprise!), an angler who wishes he’d set his parking brake, and another who will now make sure that any shark he catches is definitely dead before posing with it. Who’s the winner of this year’s top Elmer Award? You be the judge.

Your Government in Overreaction
When law enforcement officials received reports of a lone man firing shots from a long gun near Waseca, Minnesota, they evidently decided it was a good time to blow the annual budget. According to the Mankato Free Press, they closed off a mile-long stretch of Highway 13 and set up a command post. In case the guy also happened to be carrying nuclear weapons, they called in police officers from six counties and the Minnesota State Patrol, while a SWAT team from the South Central Drug Task Force searched nearby farm buildings. When those measures failed to turn up the suspect, a state police airplane was called in for aerial surveillance, as was a helicopter with infrared capability. When witnesses were interviewed a second time, a local man confessed that he had been walking along a ditch with a rifle, hunting groundhogs. The SWAT team drove the man home and searched all the structures on his property. In the end, no arrest was made.

“You have to be prepared,” said Waseca County Sheriff Timothy J. Dann. “We all worked surprisingly well together.”

**Honey, I Shrunk the Kia **
Steve Wagner just wanted to get a few minutes of fishing in on the way to work near Medford, Oregon, last April. A report by the Associated Press says he parked his blue Kia Sportage by the Rogue River and got out, then saw it start to roll toward the water. He tried to block the vehicle’s path, but realized he would be unable to stop it. Next he attempted to jump into the moving truck but had to bail out. Seconds later, the vehicle was sinking in 20 feet of water. Meanwhile, a call had come in to the Rogue River Rural Fire District reporting that a car with passengers inside was sinking near the dam. Chief Greg Winfrey raced to the scene and found Wagner, dry but dejected. Eventually, a diver attached towing cables to the SUV to pull it ashore, with Wagner’s fishing tackle bobbing around inside.

“I’ll be in the book of dummies for eternity,” Wagner predicted. “And my wife is definitely going to rescind my fishing privileges.”

** Take the Picture Already**
A Houston angler who had landed a 31/2-foot bull shark got a ride in a LifeFlight helicopter after the shark forcibly resented the invasion of his privacy. According to the Houston Chronicle, after landing the bull shark-and evidently thinking it subdued-the unidentified angler held the fish up for his friend to take a photo. The shark had other ideas, whipping around and sinking its teeth into his arm. The friend sped his wounded buddy to a boat landing, wherre a helicopter picked him up.

“He was all wrapped up in a towel and blood was going everywhere,” said Susan Scott, who was at the boat landing when the fisherman arrived. Jennifer Lopez and Ben Affleck reportedly have been trying to hire the fish to deal with paparazzi; it was unavailable for comment.

I think we can all agree that these brave Americans have made the rest of us look pretty skillful. I intend to write them personal letters of thanks just as soon as I get back from groundhog hunting in Minnesota.

Got a nomination? Send your story to webmaster@fieldandstream.com