Who's teaching your kids about the outdoors? 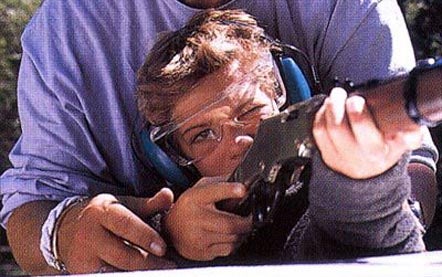 It all began innocently enough. Okay, maybe not so innocently.

It was Sunday. My wife had just headed off to hunt the malls. The deal we have is that Jane takes care of Emma, our 31/2-year-old, when I hunt. And vice versa (Latin for “clean up the kitchen, too”) when she goes out. In short, I was looking at six hours of solo baby duty. I scanned the house for resources and found the usual suspects: videocassettes manufactured by the Walt Disney Corp. or its imitators, each of which Emma has seen 9,000 times.

One of her current favorites is Spirit: Stallion of the Cimarron, in which a “wild” horse declares his kinship to all living things, asserting that his kind had always belonged in the West and always would. The horses in Spirit speak only in voice-overs, but they have enormous eyebrows to mime their moral outrage at the white men who are building railroads through their lands. They have a burning desire-not like real horses, which want merely to eat, sleep, and avoid feeding their foals to coyotes-to run free, “like the wind in the buffalo grass.”

There is also The Fox and the Hound, in which all the animals of the forest-carnivores included-live in a kind of vegetarian paradise until unseen hunters orphan an adorable little fox named Todd. The one hunter who does appear in the movie has a big moustache made entirely of nose hair. At one point, we see him approach a posted fence that reads, NO HUNTING. GAME PRESERVE. His eyes narrow. “Well, now, we ain’t gonna do none o’ that, are we, Copper?” he says sweetly to his dog. “We’re just gonna get us a no-good fox!”

It suddenly struck me that Emma’s hunting soul was in mortal danger. And that the only thing necessary for the triumph of evil in this world is for enough good men to allow Walt Disney to explain the outdoors to their children.

“Monkey!” I cried, “this is your lucky day. We’re going hunting!” Emma didn’t know what the words meant, but she liked my enthusiasm. I checked the short-term survival kit: diapers, wipes, juice boxes, and cheese sticks. I strapped her in the baby seat. Off we roared to some deer woods I’d been meaning to scout.

“Where going?” Emma asked at one point.

We were actually only going scouting, of course. But I didn’t want to confuse her with details. These particular woods were loaded with sign: old rubs and scrapes, fresh droppings, loads of trails.

“Emma!” I said. “Pay dirt! There are deer everywhere here!” We started down a tunnel-like trail. Emma, at just under 30 pounds and just over 30 inches tall, is built for this. She sprinted down the tunnels, delighted at my inability to keep up. At a place where two trails crossed, I explained that this was a good spot to put a tree stand, so you could ambush the deer with a bow and arrow.

“Like yours?” she asked. Sure, I replied, only we’d have to get her a smaller bow and little arrows. She beamed. “Little arrows for me!”

We followed tracks. We practiced sneaking through the woods. Every so often, I would pretend to spot a deer running away and lift Emma up to look at it. She always saw it. Then she started seeing her own imaginary deer and pointing them out to me just as they faded into nothingness. Long story short, we had a blast. Best of all, she was hooked on hunting without seeing anything more than deer sign.

Three hours later, when Mom came home, Emma and I were glued to a different kind of video: Whitetail Madness 5, featuring 13 hunts with bow and gun. Emma was transfixed. “Here comes the buck,” she whispered as a big 12-pointer lumbered into range. I’d already gone online and ordered a Genesis bow, a wonderful invention that accommodates draw lengths from 15 to 30 inches and that can have its draw weight adjusted to as low as 10 pounds.

Jane dropped her packages on the kitchen counter and sighed. She is from a nonhunting background, and while she has struggled to understand my passion for deer, she would just as soon not have the other preschool moms know that I am creating a shameless outdoorswoman.

“Daddy?” she asked a minute later. “Take this movie to school for show-and-tell?”

I could see it now: outraged phone calls from the Volvo moms, an emergency PTA meeting, a resolution that I not be allowed within 500 feet of preschool.

“Maybe not,” I told Emma. I put my head next to hers and whispered, “But I like your spirit, Monkey. You and me, we’re hunters.”