The one that never really got away. 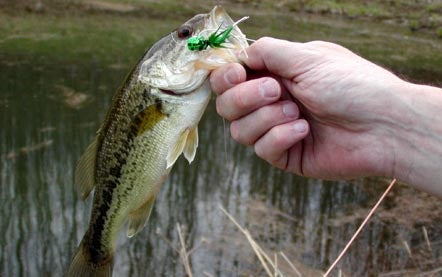 I had the dream again last night. The one that’s not really a dream at all but a memory so old and deeply fixed that it has moved into the gated subdivision of my brain where the dreams live. Now it comes and goes of its own volition and visits most often at this time of year, late spring, as if in response to the lengthening daylight. It comes in the early morning, in that twilight place where I forget whether I’m a grown man dreaming of his boyhood or a boy dreaming of becoming a man. It’s a gift when it comes, a reminder: Wake up and remember what’s important, because you aren’t going to be here nearly as long as you think.

I am wading-and now it comes to me that I was a boy when this happened, I had just gotten my driver’s license-for smallmouth bass in a rocky pool in a long riffle on a big river. The sky is overcast and a damp wind bites through my sweatshirt and wet jeans. The pool might have been lifted from the pages of a book on smallmouth habitat-narrow and deep at its head, where an arc of water leaps off a flat rock into a dark hole studded with boulders and gravel that gradually tails out to sand. It is all of 30 feet long and 10 feet across at its widest, but it is an entire universe. I begin probing with a spinning rod loaded with 6-pound mono. First I work it over with my go-to lure, a 4-inch white grub on a 1/16-ounce jighead. I swim, bounce, and deadstick it through the water. Nothing. Next I try a 21/2-inch floater-diver Rapala in Baby Bass, then a green crawdad crankbait. Zip. I have already fished the pool for too long. Any wise angler would rest it and return later.

I am not that angler.

I bear down that much harder, as if I can make a fish bite through sheer doggedness. I’m positive there are smallmouths in here, probably at least one respectable 2-pounder. How could there not be? It’s a presidential suite for brown bass, it has everything: current, shelter, shadows, a minibar stocked with minnows and crayfish, polished golf ballÂ¿Â¿Â¿size gravel lining the Jacuzzi, a good-night hellgrammite on each pillow. I know there are fish here. I tie on a firetiger popper, a 3/8-ounce black spinnerbait. Every offering comes back unmolested. Finally, I retie the white grub for a couple of desperation casts before leaving. On the very first throw comes a hit and a tiny, frantic tugging. Great. My labors have finally paid off with a one-round battle in the junior bantamweight division. A baby smallmouth, all of 4 inches long, has my hook protruding from its mouth. The little guy has more guts than brains, having smacked a lure its own size. I can’t help but smile at how he fights. Nobody has told him he’s little. He’s game, slugging it out for all he’s worth, telegraphing tight little punches up my line.

That’s when it happens. As I reel in the baitfish, a dark form suddenly appears beneath the water. It’s shaped like a mottled green football, only bigger, longer. The sighting is too quick to compute into pounds and inches. All I know is it’s huge-far and away the biggest smallmouth I’ve ever seen. The shape swoops toward the struggling fish, and I am sure that it will take the smaller one, swallow my hook, and have nowhere to run in the pool. In just a few moments I will have both the fish and the story of a lifetime.

Just as its gills flare to suck in the doomed fish, the football changes its mind, breaks off its attack, and-now-you-see-me-now-you-don’t-vanishes. I bring the fingerling in, stare at it momentarily, and let it go. It disappears, too. The whole encounter has taken about 15 seconds, and now I’m left staring into the empty pool, which has already stopped rippling, as if there never was a tiny fish, much less a monster. But my trembling hands tell a different story. Yes, I’m disappointed, frustrated, and heartsick. I’m a boy, after all, with a boy’s dreams of glory. But I feel that I’ve just been baptized, initiated. I’ve been given the secreet knowledge. I now know that there are magical fish in here, fish bigger and wilder than anybody would believe. One of these days I will catch one of them.

It’s been more than 3O years since then. In that time, I’ve buried some good friends and some good dogs, gotten married, had children, and learned and forgotten countless times that life is a limited-time offer. But on the occasions when the dream decides to come calling in the half light of dawn, I try to honor the visit. If at all possible, I blow off whatever it was I thought was so important to do that day and I go back to the river and look for a rocky pool in a long riffle.