The Deer Next Door

It was a trophy hotspot--until I started hunting. 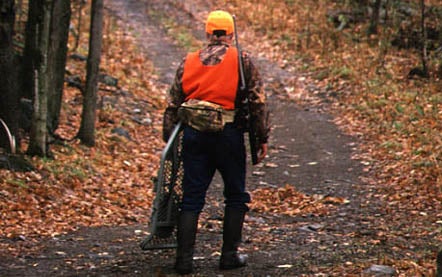 It’s not that I was cocky at the start of last year’s deer season. It’s just that the only new equipment I expected to need was an Alum-i-Lite Game Cart from Cabela’s to help me get my trophies out of the woods and into the record books without hurting my back.

My confidence came from having lucked into the mother of all honey holes behind the house of my new best friend, Jay Wheeler. Jay has the good sense to live where most monster deer can be found these days: the ‘burbs. His backyard is essentially a wooded funnel that connects a municipal park being denuded by protected deer to one of the last cornfields in the county. (Developers have long been eyeing that cornfield, reasoning that town houses are a better crop than corn, which does little to support the global market for Tyvek house wrap.)

I spent much of last summer behind my binoculars watching deer move between the park and the corn. There were big tour groups of does, gangs of unruly 1- and 2-year-old bucks, and, just as the light gave out, a few old monsters. A couple of these looked to be genetic freaks, deer with swing sets exploding out of their skulls, antlers so heavy they had to hurt to lug around.

Jay is a big dude who flew helicopters in Vietnam and usually has an unlit La Gloria Cubana cigar in his mouth. He runs a successful consulting company and has a lovely wife, Vicki. He is a guy with either a big heart or a small brain, because all he asked in return for hunting privileges was that I not park on the grass. In fact, I would happily have repainted his house, cleaned the gutters, and prepared his taxes in perpetuity. He can’t put his cars in the garage because both bays are crowded with racks from bucks he has taken from his backyard over the years. When I asked what time of year he starts hunting, he shrugged. “Oh, I usually just wait for the rut,” he said.

As bow season opened in mid-September, I parked my new folding deer carrier in Jay’s garage, half regretting that its shiny new finish would soon be marred by deer blood.

After carefully reviewing my dwindling monetary resources, I did what any diehard hunter would do. I turned off the answering machine, changed my e-mail setting from available for hire to block anything that looks remotely business-related, and began hunting my brains out. I was there at dawn. I was there at dusk. And it wasn’t even October. I saw plenty of does and yearling bucks, but the big heads were scarce. Weeks later, in the honeyed light of a late-October afternoon, I finally drew on an 8-pointer standing broadside and oblivious as he fed on acorns 16 yards away. He was racked a tad wider than his ears, and anywhere else I’d have taken him in a heartbeat. But I wasn’t anywhere else. I was here. Tine Town. Antler Alley. The Funnel of Fun.

A week later, one of those great heads appeared out of thin air 36 yards out, stretching his thick neck to sniff a rub. I slowly stood, drew, and tried to settle my 30-yard pin just over his back. Personally, I was fine. But my legs picked that moment to audition for the Lord of the Dance. The buck busted me in a heartbeat, then did that trick that only old survivors know: He didn’t wheel, snort, or jump. He simply dissolved, like the Cheshire Cat-now-you-see-me-now-you-don’t-leaving the outlines of his rack hanging in the air momentarily. I wished for nothing so much at that instant as the ability to kick my own butt.

By November, I was in the full throes of my addiction, hitting the woods each morning and losing whatever tenuouss mental edge I might have had. Big bucks don’t dawdle during the rut. More than one five-second window of opportunity opened and shut before I’d even realized what I was looking at.

On the morning of November 12, I showed up as usual, only to find Jay standing in my headlights with a grin. “Went out yesterday afternoon for the first time and got lucky. Arrowed a nice buck and gutted him, but I need a hand getting him out. You mind?” And then Jay and I went out and loaded one of those swing-set bucks on my cart. “Sure am glad you bought this thing,” Jay said.