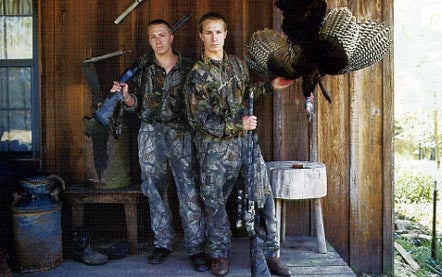 Identical twins Douglas and Draper Mauldin, 22, recently went on the Late Show with David Letterman after placing third in the Spit, Drum and Gobble Division of the 2004 Wild Turkey Bourbon/NWTF Grand National Calling Championships. They imitated-down to the strutting-two exceedingly vain gobblers meeting in the woods, an act that had the New York audience howling. Field & Stream caught up with them at their home in Lyon, Mississippi.

(Q) What’s your advice about turkey calling? **
**Douglas: A gobbler is very curious. Once he knows where you are, he’ll come looking if you haven’t spooked him with too much calling. If he’s gobbling and you’ve already called enough so he knows where you are, it’s often best to shut up. Draper: Act like you’re on a date with a girl. If you talk too much, you’ll run her off. Relax. Let her set the tone.

(Q) What do women think of your talents?
** Douglas:** I tell you, girls just love the turkey calling. When we go walking through the campus at Mississippi, we get lots of girls asking us to do turkey calls. They think that it’s hilarious.

(Q) Were women calling you after the Letterman appearance?
Douglas: Not as much as you might hope.

(Q) Obviously, you’re often mistaken for real toms.
** Draper:** Tons of times. It’s dangerous on public land. I’ll do it to my friends sometimes when they’re out hunting near me on private land, you know, just to mess with them. But I don’t let them get too close before I call out to them in my natural voice.