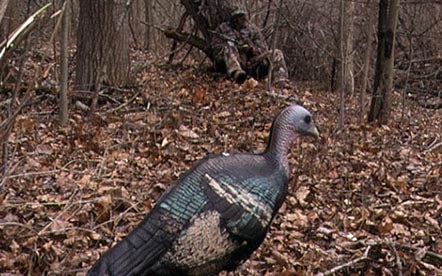 In the lengthening light a dozen camo-clad guys sit downwind of a grill piled with rib eyes, sucking down the scented smoke and wishing the cook would call dinner. They’ve just rolled into camp to go turkey hunting tomorrow. The mood is boisterous. Old friends’ faces light up at the sight of one another. There are mock arguments, feigned indignities about whose pants no longer fit, who’s going gray faster. New hunters smile and listen hard, gauging their place in the pecking order. The stories, the glue that binds these men together (from teenagers to octogenarians, and there’s a woman in camp this time), are told and retold. It could be any camp in America, but it’s not. There’s something different here. The laughter comes from deeper in the gut. Handshakes have a way of turning into hugs. The natural tenderness that grown men feel for each other is closer to the surface here. Maybe it’s because every hunter came to camp in a wheelchair or leg braces or on crutches with an empty pants leg pinned back so they wouldn’t trip over it.

Tail ends of stories flit through the smoke. “I’d found this dead black snake by the fire ring, and you know old Toby’s more afraid of snakes than he is of God himself. So I start hollering and shaking that snake all around like it was biting me. And instead of helping me, Toby takes off the other way with his power chair in overdrive-just hauling. So I wing that snake after him. And damned if it doesn’t hit him right back of the head and wrap around his neck. And Toby’s just burning rubber and screaming, Â¿Â¿Â¿Get it off! Get it off!’ And then he hits a root and falls over. Even on the way down, he’s screaming, Â¿Â¿Â¿Snake! Snake! Snake!'”

There are guys laughing so hard they wipe tears away, but nobody’s laughing harder than Toby himself. Not bad for a guy who, after the car accident that took his legs and very nearly his life, fell into a depression so bleak his friends feared he might finish what the car accident had started.

“I’m just so damn proud of Toby,” one guy whispers to his neighbor. The neighbor smiles and nods a deep, knowing nod, almost a benediction.

The next morning, I attach myself to Tommy Sorrels, a high school football star almost up until the moment the polio hit in 1955. Now his right leg is about as useful as socks on a rooster. But Sorrels, a proud man, has found a way to walk unaided by throwing his hip forward and trailing his bad leg after. All it takes is an unseen pebble to make him lose his balance and fall, but you wouldn’t want to be the one to tell him he ought to be doing it differently. He is one of the older hands at camp and somewhat famous for missing easy shots at turkeys. He takes it upon himself to make sure that everyone who comes to these hunts-sponsored by Wheelin’ Sportsmen (www.wheelinsportsmen.org), a nonprofit group that partners with the National Wild Turkey Federation to put on free events for men and women with disabilities-feels welcome and included.

Each hunter is assigned a volunteer guide who helps him set up for turkeys. Joel Bennett, who works maintenance at the Savannah River Site (a nuclear facility) where the hunt is taking place and who has the look of a man born to wander the turkey woods, is partnered with Sorrels. Under a sky with pinprick stars, we cross a railroad track. Sorrels holds Bennett’s shoulder for support, while I bring up the rear, carrying decoys in a camo burlap tarp. Just over four hours later, around 10 o’clock, Sorrels misses a walking tom twice at 40 yards. “Oh, Lord,” he says, grimacing. But it’s not the turkey he’s worried about. “They’re gonna fry me at court.”

Court, it turns out, is a ritual of this group. At lunch after the hunt, anyone who misses a bird is brought up on charges, with prosecuting and defense “attorneys.” Sorrels is described before the court as a repeat offender, having missed another bird last week at even closer range.

“This is not a man who pulls the trigger all at once,” bellows the prosecutor. “He likes to start on Tuesday and finish on Wednesday.” Sorrels and four other men are convicted of crimes against turkey hunting, teased mercilessly, and forced to sing “She’ll Be Coming ‘Round the Mountain.” As I listen, it dawns on me that I’ve never been in a camp with guys who were gutsier or having a better time. A short fellow with glasses wheels over and introduces himself as David Cianfarano. “They told me you were writing about this. You’ve probably figured it out for yourself, but in case you haven’t I wanted to tell you: There are no disabled people here. Everyone is focused on what they do have, not what they’ve lost.” Message delivered, he shakes my hand and wheels off.