The Book of John

Cabela's: Coming soon to a bathroom near you. 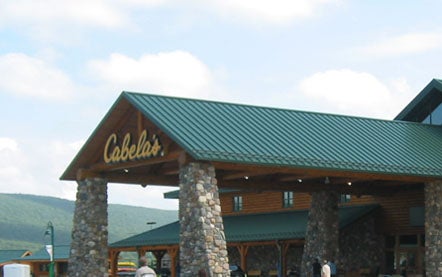 Around this time each year a loud thump outside the house announces to millions of American sportsmen that the new Cabela’s catalog has just hit the front porch, flattening any flowerpot, bicycle, or dog on which it lands. After burying Duke in the vegetable patch, the breathless recipients attach a heavy chain from their ATV to the document and drag it into the bathroom for a first look. This lasts, on average, half an hour. Then, a simultaneous flushing of toilets causes reservoirs nationwide to fall 6 inches, injuring thousands of jet skiers and proving once again the existence of a just and loving God.

The word catalog _comes from the Greek katalogos_, literally “words causing income to vanish.” But _catalog _hardly begins to describe this magical work. A quick perusal yields information to live by. For instance, raise your hand if you knew any of the following three facts:

A box of Weatherby Magnum Ultra-Velocity ammo in .30/378 Weatherby Mag., 200-grain Nosler Partition, will run you $90, or about $4.50 per shell. At that price, you might want to let that Cape buffalo get really close before wasting a shot.

For about 50 bucks more you can get a pair of Cabela’s Kangaroo Upland Bird Boots, which weigh almost nothing, are a whopping 62 percent stronger than cowhide, and will still be going strong when you are pushing up chokecherry. Of course, state law prohibits their shipment to California for fear of offending celebrity animal rights activists.

Nothing screams “good taste” to your houseguests like a $60 clear-acrylic toilet seat in which fishing lures, bullets, or hooks are embedded.

The most recent catalog runs to 711 pages and weighs more than some Korean automobiles. The day is coming when a cabela will refer to a unit of weight. You will buy crushed stone and pig iron by the cabela. Diet pills will promise to help you shed those unwanted cabelas. Olympic lifters will bow their heads in silent tribute to the brave Ukrainian champion who was crushed when he attempted to clean and jerk what would have been a new world record of 100 cabelas.

Dick Cabela’s empire started out small. Back in 1961, he placed a three-line ad in a magazine offering five hand-tied flies to any customer who would cover the 25-cent postage. Orders were processed at the company headquarters, Dick’s kitchen table in Chapell, Nebraska. The flies were sent back with a mimeographed sheet listing other sporting items for purchase. The operation has been so successful that nearly 6,000 employees now work in that kitchen. Mary, Dick’s wife, is said to be tired of having to make them sandwiches every day and thinks it’s about time to build a cafeteria.

The Cabela’s catalog has long exercised a strange power over otherwise rational men. As you consider it in the privacy of the best seat in the house, it starts to seem like a good idea-no, a responsibility-to buy not only what you need immediately but also gear that you might need some day. Thus, guys who live on fishing boats in Alaska suddenly crave 17-inch camo snake boots. Others who have difficulty opening the hood of their truck covet the titanium-handled Leatherman Charge XTi with nine double-end bits should they ever run out of gas in the wilderness and have to drill for oil. Guys who’ve never bushwhacked through cover worse than the azaleas in their front yard must have the Filson Double Tin Cloth Chaps that stop the smaller shotgun loads at close range.

I recently ordered the handheld Thor 10-million-candlepower spotlight. Why? Because let me ask you something: How stupid are you going to feel when hordes of eye-sucking aliens invade Earth and your entire family dies just because you lacked the wattagee to signal other planets for help?

My personal weakness is footwear. I’m the kind of guy who can’t be happy if my feet aren’t. That’s why I need the Trans-Alaska III pacs endorsed by the winner of the Iditarod and rated to minus 135 degrees. Overkill? We’ll see who’s laughing when the next ice age hits. And I know the chances that the editors of this magazine will call to say “Heavey! Next plane to Alaska. Bighorn sheep” are slim. But slim is not none. That’s why I need the $270 boots handcrafted by Austrian elves and featuring the Vibram multigrip outsole and removable Air-Active footbeds designed for precisely that kind of hunting.

I could go on. I’d like to. But my daughter is banging on the bathroom door and calling me a doo-doo head. Don’t forget the camo bedding on page 327. The Mossy Oak Shadow Grass window treatments are particularly spiffy. And now, jet skiers of America, say your prayers.