FIELD & STREAM recognizes those among us who should stick to golf. 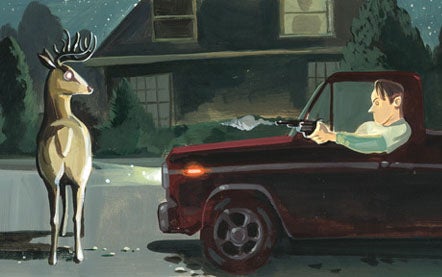 “Be vewy, vewy quiet.” With these words, Elmer Fudd invariably seals his doom. He can’t stand playing the fool, but he is fit for no other role. The universe delights in taunting him. Truth is, there’s a little bit of Elmer in all of us. And a whole lot of him in a few of us. We here at F&S; salute those brave souls. They make the rest of us look far more competent than we really are.

The Opportunity Knocks Award
Bryan Parker picked the wrong place to spotlight his first deer. The Hartselle, Alabama, man, 20, was driving home with a Smith & Wesson pistol he’d bought for his father when he saw a deer frozen in his headlights and shot at it. He happened to be right in front of the Morgan County sheriff’s house at the time. Sheriff Greg Bartlett, who at first thought someone was shooting at his home, chased but lost Parker’s truck. Parker was arrested 30 minutes later at his home after the sheriff identified the vehicle. He was charged with hunting after dark, hunting on a public road, hunting from a vehicle, and hunting without a permit. “I’ve never toted a gun,” he said. “When I saw the deer, I said, ¿¿¿Oh, I’ve got a pistol.’ I must have been out of my mind.”

**The Price of Marriage Award **
Edwin Nichols was a little too focused on the flying carp for his own good. At least that’s what his wife, Vivian, would say. The two were on the Missouri River with a friend last summer when a silver carp leapt from the water and whacked her in the face, breaking her nose. While her husband and the other man were whooping it up, trying to grab the thrashing windfall, Vivian fell back across the center console, blood streaming from her nostrils. “They didn’t realize I had been hurt,” she said. “They were saying, ¿¿¿I can’t believe this fish jumped into the boat!’ I’m going, ¿¿¿Hey, guys!'” No word as to which couch Edwin slept on that night.

The Let Me Show You How It’s Done Award
Stalking wary whitetails requires three things: patience, stealth, and a sibling who agrees with you. Gregory Moss, 40, and his brother, Charles, 35, were hunting private land near Zanesville, Ohio, when they found themselves in less than total agreement about how to proceed. The discussion turned into an argument; the argument became a wrestling match over who got to carry the shotgun; and the wrestling match caused the gun to discharge. Gregory was treated for a head wound at a local hospital. He declined to press charges, saying the shooting was accidental. There was no word on whether their mother had grounded them.

[NEXT “Story Continued. Click Here”] The We’re Gonna Need a Bigger Boat Award
Intrepid Floridian Sherridan Bouges, 47, was fishing with live shrimp on Lake Harris last February when he hooked an unfamiliar critter that caused him great trepidation. It had sharp, spiny fins, a menacing mouth full of teeth, and what looked like heavy body armor. Who knew what a fish like that could do to a man? “It scared me,” he later admitted. Fortunately for Sherridan, his mother was in the boat. “He was afraid to bring it in,” crowed the elderly Eather Bouges. “I told him to pull it in with a net.” The fish, all 12 inches of it, was identified as a Plecostomus, a sucker-mouthed scavenger that feeds primarily on algae and is therefore common in aquariums. Nancy Tucker, manager of the nearby Animal World Pet Center, said somebody had probably dumped this one into the lake from a fish tank.

The Everything I Need to Know I Learned From the Terminator Award
As president of the Tift County, Georgia, school board, Richard Golden knows that it’s not enough to say the right things; you have to follow through with deeds. Otherwise kids will see that you are not sincere. That’s why when he discovered Derek Pettiford, 22, fishing on his property, he not only threatened to kill him-he also shot up his car. Pettiford said he saw no posted siggns along the pond off U.S. 319 but admits that he should have realized the land belonged to someone. “But I didn’t feel like I was causing any dangerous harm,” he said. Golden, ever mindful of his position as an educator and role model, begged to differ. He used a shotgun to discipline the car in the radiator, windshield, hood, and trunk. He pled guilty to pointing a firearm at another person.

**The You Can Arrest Any Citizen if You Try Hard Enough Award **
The owner and the manager of Bellar’s Place, Indiana’s largest private deer-hunting preserve, were just trying to make hunting less troublesome for their clients. But try telling that to overzealous federal officials. Russell Bellar, 49, and Hinds Jones, 36, are facing more than 30 felony charges just because they let hunters measure a buck’s rack before the selected deer was tranquilized, led into a pen, and “hunted” for as much as $20,000. According to the U.S. Fish and Wildlife Service, since 2001 the two men have conducted more than 50 of these deer…hunts. Authorities said their investigation also found illegal weapons, unlicensed hunters, and the use of bait. Bellar, a developer, denies that he charged hunters huge sums to kill particular deer, saying they had merely paid bed-and-breakfast fees. He dismissed the case-each of the 30 felonies carries a potential five years in prison or a $250,000 fine-as a political vendetta by the state department of natural resources. “This is all political stuff; that’s all it is,” said Bellar on the day of the raid. “They are against anyone that raises whitetail deer.”

The Shouldn’t Be Allowed Outdoors Award
Golfer Roy Williamson, 60, hit a tee shot on a Georgia course that ended up in a wetland area. “I saw my ball pretty much in plain view,” he said. “Unfortunately, it was being tended to by a rattlesnake that I didn’t see.” Williamson said that as he retrieved the ball he felt what he thought was a brier scratch his right temple. Then he saw blood and a rattlesnake he insists was 61/2 to 7 feet long. His brother, son, and brother-in-law (apparently golfers go out in groups because it’s safer that way) came running to his screams. He remembers their bringing him to the clubhouse, but when he was next aware of anything at all, three days had passed. Although the snake bit him twice, he will live to chase the little white ball again. Doctors’ greatest concern was the bite on the forehead, alarming because of its proximity to the brain, even in golfers.