Only a certain kind of man hunts the entire season. 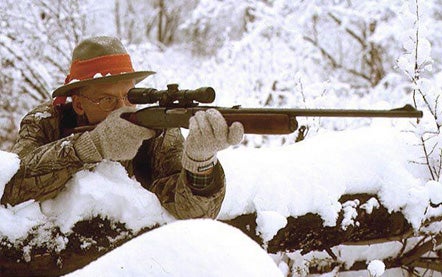 I never expected to say this, but here goes: I’m glad the season is almost over. I say this for the following reasons:

**>> ** If, like me, you are fool enough to dream of killing a monstrous whitetail buck with a pointy stick, the state where I hunt guarantees your right to have at it from mid-September to the bitter end of January. And until the season runs out and hunters still afield are subject to prosecution, this is exactly what I intend to do, even though on a cold January afternoon I am about as likely to see Jesus wandering around during daylight hours as a deer.

**>> ** During a lunch meeting with my boss (me) back in August, we drafted a memorandum of understanding stating that the company would adopt a liberal leave policy during hunting season for all staff (me). It turns out that revenue can take a substantial hit when the corporate goal is “earn enough for gas money for the next three months.” Especially in this global economy.

**>> ** I seem to be aging rapidly. The circles under my eyes are developing circles of their own. I am experiencing frequent bouts of blurred vision, forgetfulness, and confusion as to my whereabouts at any given moment. So this is how it feels to be David E. Petzal on a good day.

**>> ** Failing to get a reaction from me with standard by-mail death threats, the Book-of-the-Month Club has hired a bounty hunter to find me.

**>> ** The guy who holds down the midnight shift at my local 7-Eleven rings me up for a 32-ounce coffee and an Artery Buster Biscuit even before I place the cellophane bag of death in the microwave. He may do this simply to be helpful; he may do it to minimize the time the wild-eyed guy wearing camo pants and an untucked pajama shirt spends in the store.

**>> ** The 1-ounce amber bottles currently rolling around under the seats in my car are making such loud clinking sounds that the entire family now refuses to ride in it. They have also made complaints about the perfume, which I would describe as a bracing blend of single-doe estrous, Trail’s End #307, and intruder-buck scent.

**>> ** After two hours on stand without seeing any deer, I start to think I’d be warmer if I could just take a glass of ice water and pour it down my pants.

**>> ** Last week, after sitting quietly in a cafe for 10 minutes, I tried to rattle up a waiter using two spoons.

**>> ** When I happen to cross paths with my wife, Jane, from time to time, she reminds me that insanity is continuing to do the same thing but expecting different results.

Now that the season is nearly over, I am almost looking forward to the traditional promises to family and collection agencies to do better. I pledge to be a better husband, father, and provider to Jane andÂ¿Â¿Â¿I believe our baby’s name is Emma.

Oh, right. And Jane says she’s not a baby any more, she’s almost 5. In fact, my wife is holding up a calendar at this very moment and indicating that Emma’s birthday is in six days. And what she wants more than anything else is a 1997 Pink Splendor Barbie that retails for $900. Right now, I’m not in a position to haggle. Pink Splendor Barbie it is. (Note to self: Have bow appraised for cash value immediately.)

What should a man think about at such trying moments? Me, I go for deer every time. I find it soothing to meditate on the bucks that have survived the season and are even now walking around out there in the dark. Bucks whose antlers have already begun to loosen ever so slightly. In just four or five months, performing a trick whose power is undiminished by the millennia, those deer will start to grow new, larger ones. Almost before you know it, hunting season will be upon us again. And the corporate goal of Bill Heavey Freelance Enterprises Ltd. will once again be reduced to two words: gas money.