For an outdoorsman, March is the cruelest month. 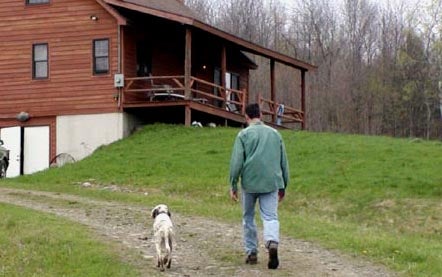 March is that magical month when Nature, rolling over in response to the sportsman’s gentle nudge, glares back with a party girl’s bloodshot eyes and tells you to stick it in your ear. Rebuffed, you stare out onto a soggy landscape in which it is impossible to tell where the earth stops and the sky begins. That’s when it hits you. It’s nuclear winter, that part of the year when all life seems to pause, and darkness and extreme cold envelop the earth. You’d see more activity inside the brain of a fundamentalist preacher.

The ducks and geese are south of the border, sucking on a cold cerveza and stubbing their webbed feet into the warm sand. Surviving deer are thicketed up, still hearing the whistle of rounds that grazed their briskets. More than one grizzled 8-pointer is even now shaking his head in disbelief. “Chasing does during daylight in a beanfield? Why not just stand in the middle of an Izaak Walton shooting range and get it over with?” He murmurs thanks to the trinity that has been saving his kind since 1963: (1) the .300 Winchester Magnum rifle; (2) the got-me-more-gun-than-you hunters from New York to Texas who choose this firearm because you never know when a seriously lost bull elk or marauding grizzly could pop up three farms over; and (3) the shooter’s flinch that happens when you combine (1) and (2). Without them, that buck would be swimming in tomato sauce and pinto beans right now.

So what are Your choices? Spring gobbler season is 30 days-one eternity-from now. Pattern your gun. Practice your purrs, cutts, and yelps. Lather, rinse, repeat until insane. Psych wards are full of superb turkey callers.

Fishing? Absolutely. Let me offer some tips. Jig a 1-ounce spoon vertically in deep water and use a Carolina-rigged finesse worm for shallow presentations. Because a bass only needs to eat about once every two weeks when the water is below 50 degrees, your odds of getting a bite are about equal to those of having Donald Trump become your apprentice. But these are still the lures to use: the jig because you won’t wear yourself out casting the damn thing, and the worm because it’s a good “indicator” lure. Any subtle tick in your line could, theoretically, be a bass. More likely, you have lost control of your hand muscles, indicating the onset of hypothermia. As always, you owe it to your loved ones to wear a PFD while on the water-but not because it will save your life. Fall in and the shock of the cold water will instantly render you incapable of movement. By having the foresight to freeze upright, bobbing next to your boat, you spare search-and-rescue crews untold hours with the grappling hook. And the minnows will not have a chance to nibble your face into hamburger, giving the mortician something to work with should your heirs opt for an open casket.

[NEXT “Story Continued Here”] My advice for this time of year, if you are gainfully employed, is to bank some serious overtime pay against future outings. As an outdoor writer, I don’t have this option. When there’s nothing going on outside, there’s not much going on upstairs. What do I do with such freedom? Mostly I sit in my basement, stewing in frustration and the long underwear I haven’t changed in two days and a beard I haven’t shaved in three, drinking coffee until I start speaking in tongues.

Last year, after several days of this, I couldn’t take it anymore. I put on my new Filson Wetlands Hunting Hat (purchased during a particularly severe bout of cabin fever), buckled it under my chin, and ran into my yard. Using only a pocketknife and a shoelace, I tried to fashion a bow drill, a friction-based fire starter I’d made exactly once in a survival course. I started by attacking a dead cedar tree. Soon I had fashioned the bow, spindle, socket, and fireboard. I spent the next three hours on one knee, bent over a wet piece of wood, trying to start a fire. In the process I cut my hand deeply and thorooughly muddied my long johns. But the experience brought home two important lessons. One is to never go into the woods without NATO-rated waterproof matches, a flint and steel, and a good lighter. The other is that it takes one heck of a long time for winter to turn into spring, and there’s not a lot you can do about it.

So if you happen to see an unshaven guy outside in his underwear, talking to himself and wearing a camouflage hat, just smile and wave as if it’s the most natural thing in the world. Which, in a way, it is.