Lessons From a Farm Boy

Rule No. 1: Don't bring home skunks in a gunnysack. 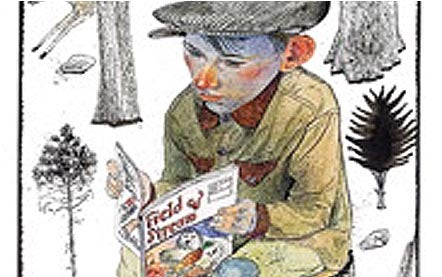 In conjunction with our IIoth anniversary, Field & Stream recently put out a call for longtime readers and heard from Hodgen O. Patrick Jr., who grew up hunting and fishing in Jasper County, Missouri, took some shrapnel aboard a destroyer defending Guadalcanal in 1942, and learned to tie flies during three and a half years of rehab at a naval hospital in California. At 91, he lives 20 miles from the farm where he was born and still ties 3,500 to 5,000 flies a year. I called him, expecting a sweet old guy who would pat F&S; on the back for the pleasure it’s given him over the years.

The first thing he did was tell me what the magazine was doing wrong. “When I was a kid, there were guys right here who went and hunted the Oklahoma Territory around Sand Springs. They’d go for 40 days, shoot a whole bunch of turkeys and deer, then sell them to a meat buyer in Tulsa. Sportsmen eventually put a stop to that. And then we congratulated ourselves for the longest time about having gotten rid of commercial hunting. Fine.

“But now we’re commercializing it all over again. Today, it’s all about guides, lodges, and gear. But hunting and fishing, they’re about the experience of the individual. And you don’t get that at a lodge, or with a guide, or by having the latest gadget.

“I’ll tell you why this matters. We won our independence from the British because of men who had two things: a knowledge of hunting and a cause they believed in. Hunters have always been the backbone of the Marines and the Army. The great hero of World War I, Sergeant York, was a hunter from Tennessee. So hunting, from that standpoint, really is priceless. It’s something that develops a man’s character. And the only way you do it-learn to shoot, scout, move in the woods-is by getting out there alone.”

I asked him when he first started getting F&S.; As a boy, he says, “it wasn’t a question of subscribing. It was a question of being hungry for something to read. We kids would pass around stacks of magazines-read them until the print wore off and they fell apart in our hands. I couldn’t afford to subscribe until after I got married.”

Mr. Patrick reminisced about the .22 Stevens Little Scout he got on his 10th birthday. He practiced until he could hit a running rabbit more often than not. And he told me about the time he and a friend decided to make some money getting furs. With the help of a dog, the boys captured two skunks and a possum, all alive. Since it was still warm out, the young entrepreneurs figured the smart thing to do was to keep the animals until their winter coats came in. He walked home with them in a sack over his shoulder. “Before I even turned off the highway into the farm, Mama threw up the window and yelled, Â¿Â¿Â¿Sleep in the barn!'”

[NEXT “Story Continued…”] In the winter his father would put gunnysacks over his and his sister’s boots, then secure them with baling wire so the two could stay outside and play all day. “There was a girl from the farm near ours who watched us. Dad was very wise in his way. He told her, Â¿Â¿Â¿Just keep up with them and keep them safe. Don’t corral them.’ That’s what she did. I ran into her many years later. When I asked if she remembered us, she said, Â¿Â¿Â¿Lord, I sure do. You kids about ran me to death.’

“It’s been a good life,” he says. “I’m lucky to still be around. And it still makes me feel good to tie flies, to show I can accomplish something-even sitting on my butt.” Nowadays, Mr. Patrick ties wet flies exclusively. “I read that 90 percent of a trout’s feeding is done under the surface. Makes sense to me to put your fly where the fish are looking for them.”

He laments that so many beginning fly-tiers give up too soon. “The thing I learned is that your fingers won’t do anything you tell them to at first. But you just keep at it, and pretty soon they’ll do it by themselves.” He won’t sell any of his flies. Instead, he gives them to friends and relatives as keepsakes. “Heck, I don’t have that long. I gotta leave some tracks.”

He lost his wife last year. His children live in Colorado and California. But he’s the type of man who refuses to relinquish his grit, in defiance of more years than the rest of us are likely to see.

I asked him what rules he followed to find a happy life. “Don’t do anything you’re not proud of,” he said immediately, then paused for a second. “That pretty much covers it.”

A week later, a small box arrived at my home containing 80 wet flies tied in 30 patterns. This summer, I hope to go fishing with Mr. Patrick and give them a try.