In hunting camp, size does matter 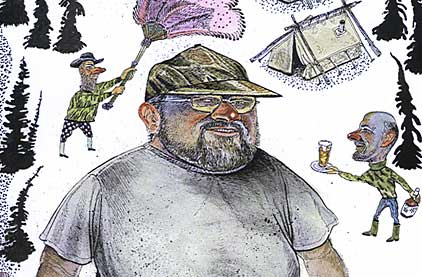 Any time you throw together a bunch of guys who don’t know one another in hunting camp, it takes a bit of scratching and sniffing before the top dog emerges. I have been in this situation often enough to know three things about the process:
1. I am not in the running.
2. The initial front-runner rarely holds the lead for long.
3. Watch out for the fat guy.

I was recently hunting caribou above the Arctic Circle in Alaska (a phrase, incidentally, that I now work into every conversation I have, including with whomever is on the other end of the intercom at the big red drive-up menu at Wendy’s), when I found myself sharing a tent with Steve Freese, 56, a newly retired Douglas County, Nebraska, cop, who clocks in at 5-foot-8 and about 245. He has the widest-set eyes I’ve ever seen on a human and a head like a bowling ball.

The younger men figured that putting the two hunters most at risk for rapid-onset Alzheimer’s in the same tent was a no-brainer, which suited us fine. Young guys invariably assume their lives are unique and fascinating, but older guys know that, superficial differences aside, we’re really all as alike as eggs.

The superficial difference between Steve and me was that I spent 10 minutes each morning rooting around in my duffel for any socks and underwear that might have been miraculously freshened by 24 hours in a tightly packed bag, while Steve would simply fillet a vacuum-sealed plastic pouch and remove clean socks and long johns. He had made these packets up using a Cabela’s food vacuum sealer. “Handiest damn thing you ever saw,” he said. “Food is just the beginning.”

As we all sat around the fire the first night, Steve sipped a Beam-and-Sam’s-Club-cola. One of his last duties as a police captain, he said, had been as a trainer, whipping new recruits into shape before they could hurt themselves or, more important, older cops. “First thing, I’d ask them, Â¿Â¿Â¿How many of you guys have heard that there’s no such thing as a stupid question?’ And they’d be so eager, you know, just clawing over each other to get their hands up first. Â¿Â¿Â¿Well, that’s a bunch of bull crap,’ I’d tell them. Â¿Â¿Â¿Your best move for the next two years is to shut up and listen.'”

Later, we all weighed in with our hunting plans and ambitions. Steve opined that he was as likely to take a caribou close to camp as not; other factors being equal, he preferred less hauling to more. Sure enough, at about 2 P.M. the next day, he dropped a heavily racked bull just 350 yards from camp. Hearing the shot, I hustled over to help, arriving in about 20 minutes. By that time, Steve was cleaning his fingernails with his knife. At his feet lay four neatly butchered quarters, hide still on to protect the meat, and a small mountain of expertly cut tenderloins, backstraps, neck roasts, and rib meat. Nearby were the clean, white bones of his bull, innards intact. It was astounding knife work. “You didn’t gut him,” I said, making my daily entry in the Stating the Obvious Sweepstakes. “Just more work,” he replied.

I made him a deal on the spot that I’d carry his meat if he’d help butcher mine. When they saw the carcass, most of the other guys followed suit. The fat man’s stock had begun to rise. Steve also turned out to be the best cook in camp, pushing it higher still. It was as if he had known all along he would be the lead dog and couldn’t be bothered to compete. Pretty soon, he had only to casually note that we were running low on water or that a pan needed cleaning before one of us, me included, would quietly hop to. One of the younger guys, handing him a Beam-and-Sam’s-Club after Steve had made the venison fall off the guy’s bull like it was overcooked stew meat, asked if the drink was mixed to his liking. Steve nodded deeply, then threw me a little wink as if to say, Rookies. You gotta love them.

Everybody ended up taking a bull, some as far as 2 miles away over the tundra. None was as biig as Steve’s. Last I heard, at least two of the guys had bought vacuum sealers, along with a large supply of gallon bags. Steve says those are the perfect size for a change of socks and long johns.

I called Steve recently and got him in a duck blind along the Missouri River, where he was hunting, evidently in the company of a cop he had once ridden with. “Hang on a sec, Bill,” he said. Gusts of wind buffeted the mouthpiece, then I heard that familiar voice calling: “Same rules as in the squad car, Kevin. If the weather turns bad and we’ve only got one raincoat, it’s mine.” It sounded as if the fat man was doing just fine.