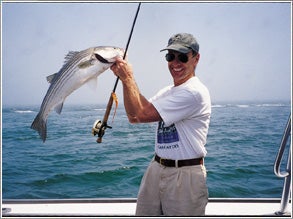 11 In Texas they say it ain’t bragging if you can do it. That’s why Lake Fork anglers aren’t bragging when they say their lake offers some of the best big-bass fishing in the country. This 27,000-acre reservoir east of Dallas initially gained fame 15 years ago as a lake that could produce bass heavier than 15 pounds-and it still lives up to the legend.

Lake Fork was designed from the start to be a trophy bass spot by Texas Parks and Wildlife. Plenty of timber and brush were left on the bottom to create perfect bass structure after flooding, and tire reefs were planted in areas that were too smooth. Fast-growing Florida-strain largemouths were stocked beginning in 1978. Since then regulations have become trophy-friendly: a three-fish daily creel with a 14- to 21-inch slot.

It’s all worked to perfection. Lake Fork began producing bass topping 15 pounds in the mid-1980s. Trophies became scarce for a few years in the late ’90s, but the Fork has been red hot again in the last few years.

Sweet Spots: For prespawn bass, over the flats off the mouths of Birch Creek, Wolf Creek, and Big and Little Mustang Creeks
What’s Hot: Red Rat-L-Trap
Local Advice: “The best way to get a leg up is to study everything about this lake before you get here,” says David Vance of Lake Fork Professional Guide service.
Prime Time: January through April
Record Fish: 18.18-pound state-record largemouth
More Info: Texas Parks and Wildlife, Tyler office, 903-593-5077

12 Seventy miles south of New Orleans, the road following the Mississippi River ends at Venice, and paradise begins. It’s not the scenery. Venice is a dusty, dingy oilfield town and fishing port where the air throbs with the growl of huge diesels. But it happens to be the gateway to the vast Mississippi River delta, one of the most prolific fisheries on the planet. It’s all here: freshwater bass, crappies, stripers, and catfish; and every imaginable Gulf battler from redfish and speckled trout to tarpon, king mackerel, tuna, and marlin. The fish are plentiful and big, and something is always biting.

13 Back in the 1940s, the Santee and Cooper Rivers were dammed to create Lakes Marion (110,000 acres) and Moultrie (60,400 acres). By the 1960s, the two lakes were famous for some of America’s greatest largemouth and striper fishing. The fishing is still great, but this isn’t your father’s Santee-Cooper anymore.

There’s a new hero in these lakes: catfish. We’re not talking kittens. These are freshwater’s version of tuna: big, bruising, tackle-busting heavyweights that have helped change the image of their species from something you drop into a pan to something you might hang on the wall. Anglers here consistently catch cats going 20 to 50 pounds.

15 There are more famous names in Florida fishing, but few spots offer a better combination of great fishing in great scenery. Located on the southwestern Gulf coast west of the Fort Myers¿¿¿Cape Coral metro area, the Pine Island Coast encompasses some famous barrier islands, including Sanibel, Captiva, Cayo Costa, and Pine Island, as well as Pine Island Sound, which is filled with dozens of unnamed wilderness islands. It offers light-tackle and flyfishing opportunities for a whole list of glamour species. “You can have good fishing almost all year long, and you can get away from the crowds,” says Capt. George “Hawkeye” Halper of Hawkeye Charters.