Why we must hold Bush to his election-year promises. 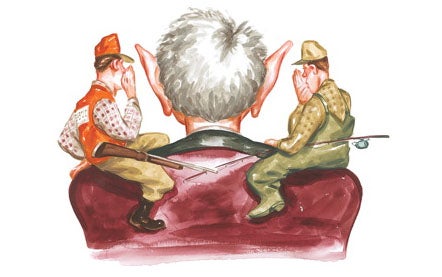 The morning after the presidential election, pundits of all stripes were using the word historic. Conservatives were calling George W. Bush’s reelection a historic mandate; liberals, a historic mistake.

They were both wrong. If history was made in this election, it was because the winning ticket, through its rhetoric and its actions during the campaign, elevated the hunting and fishing community to a position it hadn’t held in decades-that of being the leading voice for environmental protection in America.

And that poses two critical questions: Was the Bush administration serious? And are sportsmen up to the task?

“The administration made some commitments on issues important to us, and now it remains to be seen if they will follow through,” says Paul Hansen, executive director of the Izaak Walton League of America. “But I think it’s also a challenge to our community: How serious are we about holding them accountable?”

Those commitments were significant for sporting conservation groups-and necessary to the president’s reelection campaign. Caught in a dead-even contest with Senator John Kerry, the president found his support among the hook-and-bullet crowd beginning to slip. Sportsmen were unhappy over a whole range of White House positions, including its retreat from wetlands protections, the opening of roadless areas in national forests, and an energy policy that threatened critical wildlife habitats in the West. These policies, and others, had drawn steady fire from mainstream environmental groups such as the Wilderness Society and the National Resources Defense Council, but the administration had paid them little heed.

Protests from sportsmen’s groups also largely fell on deaf ears-until the race began to tighten up. When Kerry signaled his intent to court sportsmen, hunters and anglers found themselves in the unfamiliar role of high-profile targets in an election-year battle. In a heavily publicized White House meeting with sportsmen’s groups, the president listened to their concerns about a change in federal regulations that would have stripped protection from isolated wetlands that are critical for waterfowl. Soon afterward, the administration announced a policy pivot that restored protection to that habitat.

[NEXT “Story Continued Here”] That was only the beginning of a presidential friendship initiative with sportsmen aimed at getting their votes. As the campaign unfolded, Bush invited a delegation of conservation groups down for a visit to his Texas ranch; he recommitted to a no-net-loss policy on wetlands, and then he announced a plan to add 3 million acres of new wetlands (which spurred a controversy over the precise definition of “new” wetlands). Finally, two weeks before Election Day, the administration put a moratorium on its plan to open a section of Montana’s Rocky Mountain Front to oil and gas drilling (whether that suspension will become permanent remains to be seen). Although mainstream environmental groups were lobbying hard on these issues, the administration changed its policies only after sportsmen loudly expressed their opposition.

“There’s no question that the hunting and fishing constituency is enhanced coming out of this election,” says Adam Colton, the legislative director of the National Wildlife Federation. “The campaign proved it’s a community that can have a lot of leverage with the president and Congress when these issues are involved.”

Few things in American culture are as illusory as campaign promises, however, and just 24 hours after the election, conservation leaders were clear-eyed about the challenges ahead. Eric Washburn, the executive director of the Theodore Roosevelt Conservation Partnership, says staging high-profile meetings at the White House will no longer be enough.

“Now that the election is over and we lay out our agenda-which won’t look much different than it did before the electioon-will they be willing to act on it?” asks Washburn, a former Senate staff member. “And the even larger question is, Â¿Â¿Â¿If they don’t act, what will the sporting community be willing to do?’ Before the election there was a reticence among those in the sporting community to stand up and be critical of this administration. Now, can we step up and say, Â¿Â¿Â¿Hey, you said you were for us, why can’t you do this?'”

[NEXT “Story Continued Here”] Among the key issues in play are further protections for wetlands, preserving roadless areas, preventing oil and gas exploration in game-rich habitat, monitoring changes to the Endangered Species Act, and strengthening the Farm Bill to fund more conservation easements. That’s a large menu, and since the so-called “green” organizations have little traction at the White House, sporting groups are charged with the responsibility of advocating for environmental protection.

Jim Range, president of the TRCP and a longtime lobbyist, thinks it’s time for sportsmen to add a little steel to the tone of friendly persuasion they have traditionally used when lobbying Congress and the administration.

“I’ve been around here for 30 years, and I have never experienced the type of interest in issues that are specific to our community like we have had this last year,” Range says. “This election showed that the hunting and fishing community as a constituency is one that needs to be dealt with. Both campaigns tried to do that. So now it’s incumbent on us as a community to continue to work with the administration but also to apply the necessary pressure to see that some of our goals are met.”

Lost in the headlines about exit polls and the results of the presidential race was a truly sweeping mandate: In local and state elections, Americans overwhelmingly approved conservation measures-even when it cost them money. According to the Trust for Public Lands, 111 of 147 conservation measures on ballots across the country were passed-a 76 percent approval rate-creating $11 billion in new funding. And that outcome wasn’t an anomaly: Since 1988, some 935 of 1,215 conservation measures have passed in 44 states, raising almost $25 billion to support land conservation.

Paul Hansen says that record of success and the message it sends to Washington provides outdoorsmen with substantial political capital. “You hope that our political leaders will notice that when the American people have a chance to vote on conservation, even when it means adding taxes to themselves, they vote for conservation overwhelmingly. Now, more than ever, it’s up to the hunting and fishing communities to bring this to the administration’s attention.”