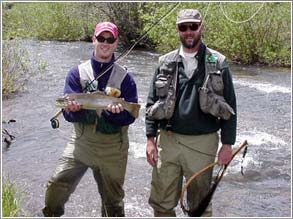 1 There aren’t many sights more beautiful to a trout angler than the blue-green flow of the San Juan River below Navajo Dam.

Packed with big browns and rainbows, this tailwater is so productive that the regulars coined a term to describe the almost elbow-to-elbow casting that sometimes occurs on popular San Juan pools such as the Texas Hole: combat fishing. But that phrase does this river a disservice. There is plenty of room to spread out. If you explore the side channels and more remote runs, the only thing around your elbows will be a hatch of midges on which rainbow trout averaging 17 inches and reaching 5 pounds or more are feeding steadily.

It’s catch-and-release near the dam and one fish-minimum 20 inches-for the next 31/2 miles. But almost nobody kills a trout here, and the result is a river full of selective bruisers. Skilled anglers commonly have 20-fish days.

The San Juan’s fame began years ago when a local angler came up with a pattern to match the aquatic worms in the river. The San Juan Worm, now standard in fly boxes all over the country, still works on its namesake river. But the main entrÂ¿Â¿e on the trout menu is midges (mostly larvae and pupae), corresponding to tiny hook sizes 22 to 26. Fish a two-nymph rig under a strike indicator.

Sweet Spot: The first 4 miles below the dam
What’s Hot: **Black Beauty Midge
**Local Advice: “The mistake I see many folks making is using too much weight on the leader when nymphing,” says John Flick of the Duranglers fly shop.
Prime Time: June through mid-July, September through October
More Info: Duranglers, 505-632-5952

2 One of the toughest things about fishing the Snake River near Jackson, in the shadow of the Teton Mountains, is getting over the distraction of being smack-dab in the middle of the most spectacular scenery in the West. And the Snake River cutthroats you will catch are as beautiful as their environs.

Dry-fly fishing with large patterns works well in late summer and early fall. Nymph fishing will get you a lot of action-but from mountain whitefish, not trout.

“The total beauty of the experience of fishing the Snake is hard to describe,” says Jack Dennis, a veteran guide and fly-shop owner. “And the fishing is as good as it was 40 years ago.”

3 Trophy walleyes and a surging smallmouth bass fishery await anglers adventuresome enough to tackle the vastness of eastern Montana’s Fort Peck Reservoir on the Missouri River. It has two main arms and a stem-to-stern length of 130 miles.

Walleyes up to 10 pounds are possible here, but fish concentrations are patchy. The best tactic is covering a lot of water by bottom-bouncing live bait or trolling lures with downriggers or planer boards. Low water has slowed the smallmouth fishing some, but a good runoff year will produce a fish explosion.

4 The Green River below Flaming Gorge Dam at Dutch John, Utah, is a moving trout aquarium, where an angler can stare stupefied into a pool that reveals hundreds of fish in the superclear water. Stunned amazement quickly yields to angling adrenaline.

“This is about the best in the West,” says Emmett Heath of Trout Creek Flies in Dutch John, who has 30 years of experience to back up his praise. “It’s still got the numbers of fish [BRACKET “8,000 per river mile”], and they average 15 to 20 inches long.”

Flyfishing with nymphs is the surest route to success for trout that reach 8 pounds or more, but the dry-fly angler and the lure fisherman will do well at times.

5 In the sprawling, high-mountain basin known as South Park, you’ll find a string of angling jewels, about 60 miles west of Colorado Springs. At its head is Spinney Mountain Reservoir, linked to Eleven Mile Reservoir by 3 miles of spring-creek-like, ranch-meadow water on the South Platte River that locals call the “Dream Stream.”

Eleven Mile Reservoir has always produced hefty rainbows, cutt-bows, and browns, along with kokanees and a scattering of big northerns. A bonus this year is the addition of more than 10,000 lunker trout trucked over from Antero Reservoir when it was drained. Trollers do best, trailing lures or crawlers behind cowbell flasher strings.

Sweet Spots: At the dam and inlet of Spinney Reservoir; from Goose Island to the inlet of Eleven Mile Reservoir
What’s Hot: Tube jigs, Kastmasters, Woolly Buggers at Spinney. Brown or black Gitzits, Pop Geer at Eleven Mile
Local Advice: **”Get to Spinney Mountain Reservoir early after ice-out and fish tube jigs in pumpkin color when the big trout are prowling near the shore,” says Edwin Borchers of the Chaparral General Store.
**Prime Time: May through July More Info: Eleven Mile State Park, 719-748-3401