A Misfire Saved Her from Punishment 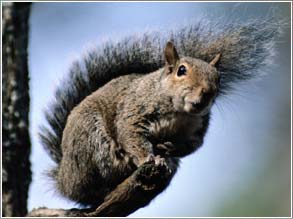 A neighborhood in LaPorte, Indiana has its very own Annie Oakley. But their gun-totting granny ended up with a limp last week when her trusty trigger finger failed her during a backyard squirrel hunt.

Seventy-eight-year-old Alberta Jones earned the nickname of the legendary markswoman from her neighbors because of her fast aim and personal vendetta against the squirrels that nibble on her birdfeeder. The feud left her injured on Sunday after her shotgun accidentally fired inside her home.

According to the_ South Bend Tribune_, after Jones noticed a squirrel eating from the birdfeeder in her backyard she grabbed her 16-gauge shotgun with the intention of killing the seed raider. But before Jones could make it outside her kitchen, the gun–pointed towards the floor–fired and some of the pellets ricocheted in the air, striking Jones in the legs. Jones underwent surgery to remove one of the pellets.

But for Jones, a day of surgery may have been just what the doctor ordered. Had she killed the squirrel she could have been arrested for hunting out of season. “Whether it’s on private property or not, it doesn’t matter,” Lt. Jerry Shepherd of the Indiana Department of Natural Resources told the Tribune. “It’s not in season. The lady was illegal if her intent was to shoot a squirrel.”

However, since the gunshot occurred inside her home, an official hunt did not take place, as it is not illegal for a firearm to discharge in the county. Shepard warned Jones that regardless of whether it’s in the backyard or the backwoods, squirrels cannot be hunted out of season.

Still, as long as the they keep raiding her birdfeeder, Jones vowed to keep the war against the squirrels going whether it means using firecrackers–as she has done in the past–or, if necessary, breaking out the 16-gauge for some out-of-season hunting. “I’ve tried everything to shag them away,” Jones said. “And they keep coming back.”