Don't be fooled, this is not just another dammed river. 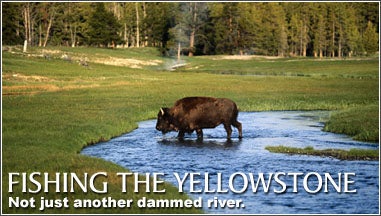 Where the Yellowstone River was only a creek, up near two-ocean pass, native trout hovered golden-bright over gravel and I was watching them when I should have been steadying my horse. She slipped on a boulder. My boot went through a stirrup, and when that dizzy mare got back on her feet, I was bouncing along behind. She would have worn me down to bare bones except that another wrangler named John Armfield risked his neck to head her off.

And then on our return trip, down where the river runs into a wide spot called Yellowstone Lake, that same malevolent mare turned my $30 Granger rod into bamboo toothpicks while I was cutting logs that had fallen on the trail. Look closely if you travel that country. You might see a weathered aluminum rod case wrapped around a lodgepole pine.

The next summer found me back on the upper Yellowstone with a steady horse and the world’s best job: packing supplies to patrol cabins in the most remote wilderness of the lower 48 states. Bob Condie was the old geezer (maybe 40) in charge of our two-man crew. I was the kid who caught trout for breakfast and then boosted packs onto eight mules that were smarter than I was. They settled down for Bob, though, when he said he would feed them to the bears. I thought he was kidding.

Next morning our cabin’s window went dark, and before we could pull on our boots, we had company. It was just a black bear, but it gobbled our trout fried in bacon fat. The mules kicked up a fuss and the horses broke out of the corral and I wanted to run them down, but Bob said they could run faster than me and they’d be back anyhow by the time I caught another breakfast.

That part was easy. My Olive Woolly Worm must have looked like a scud on steroids to the trout at the mouth of the river, and within minutes I had two cutthroats big enough to feed two hungry men.

The rest of the world has changed in the years since then, but the descendants of that pesky bear still feed on native trout and the Yellowstone River still runs free–free in its headwaters, free in the wide spot called Yellowstone Lake, free through the painted canyon downstream, and free in the long warmwater stretch that Capt. William Clark explored in 1806.

Capt. Clark’s route still makes a splendid float trip, for those who are good at sitting. I’m not, so I pick a stretch of the river that can be waded if the water is low.

It was not quite low enough, one July day in the 1960s, but Mert Parks and I went fishing anyhow. Mert owned a fly shop in Gardiner, Montana, back when fly shops were scarce in the greater Yellowstone ecosystem–not that we knew what an ecosystem was. We were among the few anglers who even knew of a place where the river could be crossed on foot.

The trout shared our idyll. One of us would put a dry fly–any pattern–in front of an innocent cutthroat and it would rise, slurp, slosh around till it could be released, and then take the fly again in a few minutes. We had to keep moving so that we would not wear out the same fish.

But there was a bigger trout just beyond reach, so I waded in deeper, heaved out a mighty cast, and took a torrent of water over the top of my waders. Mert grabbed me as I bobbed downstream. It would have been a bad way to tour the Grand Canyon of the Yellowstone.

Some weeks later I did it the right way, skidding down the canyon wall on two feet and the seat of my jeans, and when I got to the bottom, the trout were waiting. But they were not like the lazy fish in Buffalo Ford. The canyon cutthroats were pale as the mist and strong as the current, and I wondered if these luminous beings had evolved to feed on smaller trout washed over the falls. I still wonder–but not enough to go down there again.

The view from the rim is better anyhow, if you don’t mind crowds. Old folks climb from their Buicks, stretch stiff muscles, and waalk to Artist’s Point. Mothers hold tight to little hands. Everyone chatters. And then they see the canyon painted by time.

Chances are that you too have seen that sublime view and heard the roar of the Yellowstone River falling more than 300 feet. Or, if you grew up in the dark canyons of a city, you may have seen a painting of the scene–Thomas “Yellowstone” Moran was the artist, and his work went on display in the nation’s capital. Today it hangs in the Smithsonian Institution.

Moran painted better than he knew. There were proposals to dam the Yellowstone River, in the century just past, but we–Americans east and west–knew what was at stake. Dam is a cussword now in the Yellowstone Valley, and the longest undammed river in the lower 48 states still runs free for 600 miles.

Always has. Always will.