When aesthetics and action are rolled into one perfect day. 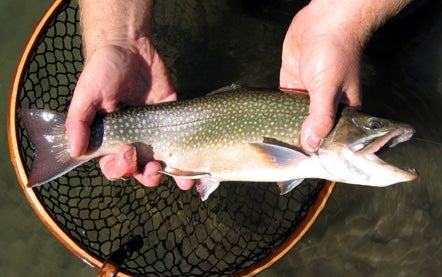 There’s a certain river I fish that drains the foothills of a certain mountain range and is as pretty as any moving water I’ve ever stepped foot in. And there’s a stretch of this river that’s prettier than the rest, where the current narrows and shoots between a pair of high limestone cliffs on a staircaselike progression of whitewater riffles and deep black pools.

Although the prettiest, this is typically not the most productive piece of water on this river, but my brother P.H. and I decided to fish it this past weekend. We both felt we’d already caught our share of trout for the summer and were collectively in one of those moods where you’ll take aesthetics over action.

We got there just as a brief rain shower ended, leaving a thin haze over the water and a general softness to the scenery. Working our way along the river’s edge toward the first long pool, we noticed hundreds of flying ants circling on the surface of the back eddies. And when we reached the pool, we saw what we had never expected to see on this stretch: trout rising everywhere.

We caught at least twice, and maybe three times, the number of trout than we ever had before there and continued to steadily catch rainbows and a smattering of browns as we worked our way upriver. After a couple of hours of this, with the falling sun at our backs, shooting filtered rays against the cavern walls, P.H. hooked a good fish and soon lifted a 14-inch brookie whose sides glowed orange and red.

“Look at that,” P.H. said, pointing behind us toward the sun, whose long arms of colored light now tinted the hovering haze the same hue as the fish’s flanks. “We better call it quits,” he decided. “It’s not going to get any better than this.”

We found a break in one of the rock walls, where the angle wasn’t so steep, and scrambled up the slope. When we reached the top and stepped from the dark hemlocks, we stopped in our tracks and stared at the hayfield directly in front of us. The long landscape stretching away and the entire western horizon were tinted red-orange by the huge neon ball sinking out of sight.

A flash of movement took our attention away from the sunset, and we watched a pair of whitetail bucks bound away through the high stalks of hay, the outline of their velvet antlers backlit and glowing.