A truck is practical around the house but a dream in the wild. 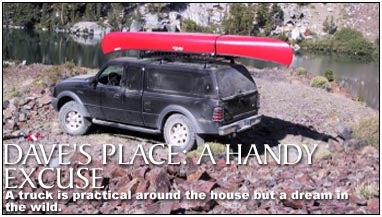 I just bought a truck. My first, I’m embarrassed to say. Of course, I’ve wanted a truck for as long as I can remember, and I’ve been bugging my wife about getting one for at least six years. For the first three, she cited such things as gas mileage, passenger room, and expense. But then I tried the old handy-around-the-house argument: “You know, for hauling firewood and getting compost for the gardens.” And since then, she’s been coming around, albeit slowly.

Yesterday, we drove to the dealer in a 12-year-old sedan and drove home in a nearly new truck. It sat in the driveway for about 15 minutes before I said, “I think I’ll go for a drive. You want to come?”

“Nah, you go ahead,” she said, and I did. I rode the pavement till I reached the dirt, then rode the dirt till I reached a familiar seasonal road that I had never dared attempt with our old car. I stopped, put the truck in 4×4-Low, and picked my way over a few thousand boulders, sloshed through a few dozen mud pits, and came to a place where I’d always wanted to hunt deer but could never get to–or drag a deer out of.

Then I drove the truck home, where it sat in the driveway while we ate dinner. And when dinner and dishes were done, I said, “I think I’ll go for a drive.”

So I drove another dirt road until I got to the bottom of the steep hill where I usually park my car to go grouse hunting. I’d been told that there was better hunting about 5 miles farther along that road, but I could never get past the jumble of jagged rocks and craters on the face of the hill. This time, I rolled right over it and found some of the best grouse cover around.

When I got home I watched a few innings of the baseball game, then yelled to Robin, who was in another room on the computer, “I think I’m going to go for a drive.”

“Okay,” she yelled back.

So I drove over a perennially flooded road of tangled roots and stumps to a nearby trout pond I once fished with a friend. We’d gone there in his truck, and I hadn’t been back since.

When I got home, Robin was waiting for me. “So, do you like your new truck?” she teased. “‘Cause you know, I couldn’t tell if you liked your new truck.”

“I guess three drives in one evening gave it away, huh?” I said. “But seriously, you wouldn’t believe where I can go now.”

“I’m really glad you like it,” she said genuinely–although I could see she still had a trump card to play.

“You know,” she continued, “while you were out I was just sitting here wondering what you like best about your truck. First, I was thinking it might be the four-wheel-drive.”

“Well, that does make all the difference,” I said.

“Then I was thinking it might be the offroad package.”

“Then it came to me,” she said. “I bet I know exactly what you like best about it.”

“That it’s so handy around the house.”