Dave Answers His Mail: The Spin Is In 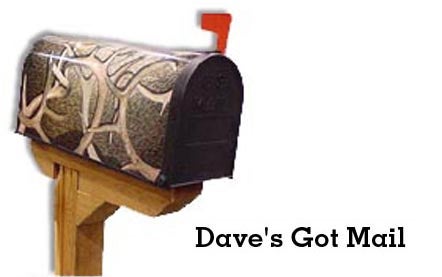 A couple of weeks ago, I asked if using electric spinning-wing decoys for duck hunting is within the realm of fair chase (see It’s Electric). Having bought and tried one early this year, I didn’t find that the contraption made a noticeable difference in the number of ducks I saw or killed. But because my experience was limited to only a couple of hunts, I asked for your opinions. So, here (in part) is what you had to say:

* I have used a spinning-wing decoy a few times with friends, and it seems to work great sometimes and not so great other times. But when it does work, the birds usually come right in, and each duck is typically shot dead immediately. No wounded birds, which I think is a good thing. It might not be magic, but if it brings the birds in closer for cleaner kills, who can argue that? –Joe, St. Paul, Minnesota

* I’m a 16-year-old who loves to hunt ducks in the Lake Champlain area. The first time I went duck hunting, a fellow hunter just 200 yards to the right of us was dropping ducks left and right. And while he had more dekes than we did, he also had a roto-winged decoy that the ducks were just piling into. By 8 A.M. he had limited out, and I had the whole bay to myself. Even though the ducks kept flying, they wouldn’t come to me.

The same situation happened the following year, but this time I had the roto-wing decoy, and the guy next to me couldn’t get any ducks in. So, I would say that if you’re in competition with other hunters, then one of these decoys is very useful. –Anonymous (Vermont)

* Spinning-wing decoys are well within the realm of fair chase, and honestly I can’t see the rationale in any argument to the contrary. Supermagnum decoys aren’t commonly seen as unfair or unethical. Nor is rigging a jerk string to your decoys on a still day. So why all the fuss about spinning-wing decoys? I think it’s a knee-jerk reaction that many hunters have to any application of modest to sophisticated technology. I most often hunt waterfowl on the upper Mississippi backwaters, where on some days you’ll have 20 to 30 other occupied blinds in a square mile. I’ll tell you this about spinning-wing decoys: You may not notice more ducks by using one, but you certainly will notice fewer ducks if you’re not using at least one while everyone around has them. I really wouldn’t care if we weren’t allowed to use spinning-wing decoys, as long as it’s the same for everyone. Just don’t try and tell me they don’t coincide with fair chase unless you are willing to make sweeping changes to the entire body of tools and techniques currently used in hunting. (And even fishing, for that matter. Isn’t using a downrigger cheating by this same rationale? And so on, and so on.) –Anonymous

* I don’t get a chance to hunt ducks very often, and as a result, I’m not a particularly good wingshot (or maybe I wouldn’t be anyway, who knows?). In any case, I went duck hunting twice last year and never grazed a feather. I went twice again this year but this time with a spinning-wing decoy, and I killed two ducks cleanly. The decoy seemed to give me more opportunities at what many hunters would consider “easy” shots. Now, can a decoy that allows a hunter with my modest skills to bag two ducks a year instead of none really be so bad? –Randy, New York

* I hate these things. I really believe that hunters, and the sport of hunting, would better off if we were into the experience more and the equipment less. I’ve discussed these decoys with many people. One group seems to use them because “they are legal and I can use all the help I can get.” Another group seems to rationalize their use: “They bring the ducks closer for ID and killing shots.” Or, “My kids get more action so they are more interested in hunting.” But as they are making excuses, they have a guilty look in their eyes. Some hunters are actuually mad that they “have” to use them and wish that they were illegal. “We got along fine without them, but now the guys in the next field over have one. They get all the shooting if we don’t put one out.” These decoys are a distracting annoyance to those of us who won’t use them. As I sit on “my” island enjoying the hunt without one, the constant motion of the one being used on a point one-third of a mile away is as annoying as a buzzing fly or mosquito. I can do without that. –Michael, Minnesota