The search for a secret hotspot may seem hopeless--until it pays off. 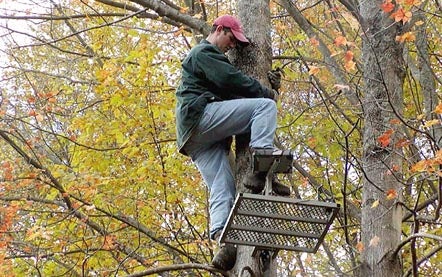 Of course, I’d be just as happy (or more so) with a place of my own, but I learned some time ago that a person has to be realistic. So, I decided to stop wanting what I can’t have and start searching for what I’m not apt to find. A slim chance, I figure, is better than none.

Actually, finding a place nobody knows about is not terribly difficult around here. The Adirondack Park is more or less in my backyard and offers vast tracts of public land where a hunter willing to walk a ways can lose the crowd. The hard part is finding a hotspot. The big woods around here are very big. In most cases, they stretch monotonously into the long gray distance, wherein the innumerable hardwood ridges look as much the same as the countless conifer lowlands that bisect them. The deer are few, and the places that concentrate them are fewer.

Despite the odds, I went searching for such a place yesterday. As usual, I started by looking for natural funnels, such as drainages, saddles, and shelves. But there are so many of these it’s hard to narrow any down; so I also looked for any significant changes in the cover along these funnels that might constitute an edge.

Of course, I kept my eye out for obvious feeding areas, as always. But those are rarely that apparent here. In most cases, the many beeches and very few oaks are widely dispersed over large areas. And when it comes to regenerating clear-cuts, other hunters usually know about them.

And even though I rarely find it, I did scout for concentrated buck sign. I’m not sure why–perhaps because their home ranges are large and loosely defined, or because there’s little competition for available does–but the bucks here leave less sign than any I’ve hunted elsewhere. On farmland, it takes a well-defined rub line or a cluster of scrapes to get my attention. Here, two rubs 100 yards apart is very promising, and any scrape made beneath a licking branch is pay dirt.

In any case, yesterday I went through the motions of looking for that secret, magical spot where good bucks gravitate and where I’ll have them to myself. And I largely expected to find what I always find: more of the same featureless woods that offer only the subtlest hints about the bucks they harbor.

But then, I made my way to a certain saddle where the woods suddenly opened and revealed an almost impossible scene. The saddle dropped gradually toward a small stream that was cutting its course through a narrow flat. And there, beneath sparse leaf litter, the forest floor was carpeted in grass, of all things. Tucked amid this huge tract of dense woods dominated by beech, maple, spruce, and pine stood an isolated grove of mature oaks, situated as though they’d been planted in a town park. My best guess is that it was once a farmstead–although I didn’t see any old foundation, fences, or stone walls. What I did see, beneath a long, low-hanging hemlock bough that swept over the edge of the grove, was a fresh scrape.

As far as anyone knows, Ponce de Leon never found the Fountain of Youth. And while I’ll admit my quest may be slightly more modest, there’s at least a chance that I’ve found what I’ve been looking for. I know this at least: It is a secret, and it looks like a hotspot. How hot it actually is remains to be seen, but I’ll keep you posted. Of course, I’m not telling you where it is.