Hunting geese is an art that I have yet to master. 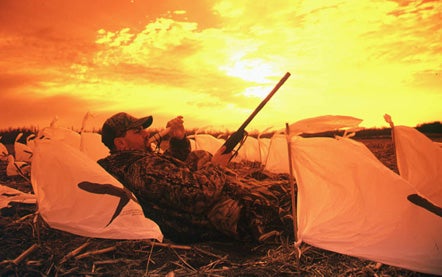 For years now, my brother Dan, my brother-in-law Geoff, and I have vowed to forgo deer hunting during the long Thanksgiving weekend at my folks’ place to concentrate instead on geese. And this year, we finally did it.

All in all, I’d say it was a brilliant move, largely because it proved to be a tremendous learning experience. Dan and Geoff had never hunted geese before, and I’d only hunted them a few times. Yet in just a few days, we gained considerable knowledge about the sport, much of which should be useful to any would-be goose hunter.

I can’t speak for Dan and Geoff, but here’s what I learned:

(1) Give yourself more than three hours to figure out how to blow a snow goose call, and don’t do it while driving.

Turns out, snow goose calls are harder to master than I thought. I probably shouldn’t have left it for the three-hour drive to my folks’. What’s more, I didn’t know the call required the use of both hands. It proved to be quite a distraction while driving and made it hard to hear the horns of fellow motorists. I also learned that a snow goose call is shockingly loud inside the cab of a pickup truck–even if you happen to have a couple of spare napkins in the glove compartment to stuff into your ears.

“NOPE!” I replied. “DIDN’T SEE ANY DEER! JUST A COUPLE RED-TAILED HAWKS LOOKING FOR ROADKILL! IS THAT YOUR SMOKE ALARM RINGING LIKE THAT?”

(2) Do not assemble goose decoys with small children nearby.

While Geoff and I put together the 100 Texas-rag snow goose decoys he’d bought, his wife (my sister), Mary, came by carrying their 3-year-old daughter (my niece), Erica. Pointing roughly in our direction, Mary said to Erica, “Look, honey, what are those?”

I’d bought a couple of snow goose flags for the hunt, and because I cannot buy anything without having to immediately try it out, I assembled one, lay down on the kitchen floor, made snow goose sounds with my mouth, and waved the flag back and forth.

Satisfied, I got up to find that my brother Paul, who is always lurking with a video camera during family gatherings, had filmed the whole thing. Now he wants $50 for the tape.

For the last five years or so, snows have vastly outnumbered Canada geese in the fields surrounding my folks’ place. Naturally, we came prepared for snows. And naturally, there wasn’t a snow goose within a mile of any of the fields we had permission to hunt this year. With no other choice, we hunted the Canadas, and while almost every goose that saw our spread flared well out of gun range, they did flare predictably.

(5) Even the most inept goose hunters, with all the wrong equipment, can kill geese.

(6) Finally, a word of caution: Learn to shoot and duck.

Turns out, a falling goose is a dangerous thing. This came as a surprise to us probably because: (a) we’re not accustomed to hitting the flying things we aim at, and (b) most of the birds we’ve shot at in the past don’t weigh nearly so much as a Canada goose.

For one thing, there’s the real posssibility of being blindsided by someone else’s dead goose. In one instance, stupidly preoccupied with the goose I was aiming at, I nearly wound up wearing one of Geoff’s kills for a hat. It’s also very easy to shoot one goose, then unthinkingly take a bead on another, while the first one is sailing toward your head like a 10-pound sack of potatoes thrown off a barn roof.

So, it’s not a bad idea to learn how to shoot and duck–otherwise you could find yourself in the awkward position of having to explain your wound to hospital staff:

“Very good, Mr. Hurteau, and how did you sustain this injury?”

No doubt, our instinctive avoidance of this kind of scene is the only reason why we don’t hear more reports of falling-goose injuries among hunters.