I know it takes hard work to get a buck, but this was ridiculous. 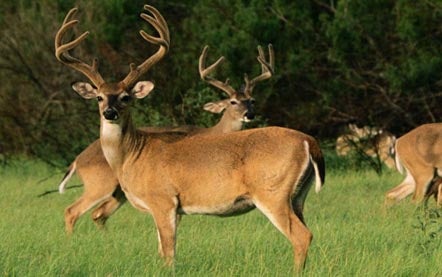 Everybody says you’ve got to be willing to put in some hard work to get your buck.

Well, I’ve got no problem with that. In fact, earlier this fall, I probably worked harder than I ever have before on a deer hunt.

At about 11 a.m., I met my friend Jo at a farm he’d just gotten permission to hunt. Our plan was to take a tour of the property on his ATV, eat lunch in his truck, then head back to the woods for the afternoon hunt. I was running a little late and didn’t have time to change into my hunting clothes, so I arrived in street clothes and shoes.

“Is that what you’re going to wear?” Jo said.

Jo, who almost always wears hunting boots and in fact probably sleeps in them, was still staring at my feet.

“You’re not going to wear your dancing shoes, are ya?”

“I’d hate to see you ruin your dancing shoes.”

By the end of the tour, we’d both found great places to hunt for the afternoon. But before we got back to the truck, the farmer called us over to where he and his family were trying to round up the heifers to put them in the barn for the winter. The heifers, however, were not cooperating.

“I know you boys want to get hunting,” the farmer said, “but we could use a hand.”

“No problem,” we said. After all, when people say you have to work hard to get a buck, they rarely specify the kind of work.

So we spent a good part of the afternoon trying to round up 13 cantankerous heifers into a fenced-off field with the rest of the cows. We ran around, waved our hands in the air, and yelled “Whoop!” and “Woa!” But the heifers pretty much went where they pleased.

On the first roundup, we got three. On the second, we got two. On the third, a couple of the farmer’s sons had the heifers moving in the right direction, but the beasts suddenly veered off and started heading for the woods. Seeing this, I began sprinting to cut them off. I was out of breath before I even got started, but I ran as fast as I could. At 100 yards, I was nearly dead, but I kept running. At 200 yards, rigor mortis was setting in, but I ignored it. Then, with 50 yards to go, I looked up and saw that with one last push I could make it just in time to turn the heifers. So I kicked it into high gear–and that’s when I hit the cow patties.

There were three or four big, fresh ones all in a row, and when my slick shoes made contact I started gliding like Dorothy Hamill on ice. Still, I managed to stay on my feet, right up until my toe caught the turf on the far side. I went down in a heap, apparently with my mouth open. Next thing I knew, I was lying on the ground with a mouthful of pasture, watching the heifers scramble into the woods.

Gathering myself, I shot to my feet and looked around to see if anyone was laughing. But no one had seen. And as the heifers had already made it into the woods, I walked back and met up with Jo.

“Man, you’re a wreck,” he said. “You’ve got grass in your teeth. And you ruined your dancing shoes. What happened?”

“I said tangle! Anyway, I got the best of her. You should see what she looks like.”

With the heifers too spooked to continue chasing them, the farmer called it quits. So we went down to the fenced-off field and walked the five heifers we did get, along with the rest of the cows, along a muddy tractor path toward the barn.

“Watch these mud holes, boys,” the farmer said. “They’re deep. Oh, and steer clear of that bull. You don’t want to tangle with him.”

“Dave likes to tango,” Jo chimed in. “He even brought his dancing shoes.”

The farmer looked at my feet. “I’ll be darned, you are wearing dancinng shoes.”

“Anyway,” the farmer continued, ” if that bull comes after you, just yank on that chain hanging from his nose, and he’ll drop right to his knees.”

“How about if I just walk behind you,” I said. “And if the bull comes over, you can do the yanking?”

With my eyes glued to the bull, I had started walking over to the farmer, when I felt my left leg sink down to the knee. When I finally pulled my foot free of the mud, my left shoe was gone.

Jo was in hysterics. “Looks like your dancing days are over.”

“For the last time,” I yelled, “they’re not my dancing shoes!”

We got a short hunt in that afternoon, and with about 15 minutes left of shooting light, I saw an 8-point rack moving toward me above some high brush.

Like I said, I don’t mind working hard for a buck, but you shouldn’t have to work hard, fall on your face, and lose a shoe. Worse, that buck never stepped out from behind that high brush.