Dave’s Place: Down in the Swamp

Getting nibbled by a gator might have livened up our trip. 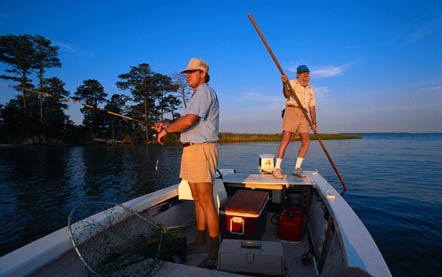 Life is full of disappointments, and for the most part, I’ve learned to deal with this by having extremely low expectations. By always assuming the absolute worst will happen, I’ve found that I’m almost never let down, and when the absolute worst does happen, I at least have the satisfaction of saying, “I knew it.”

Now, to my mind, this is a wise policy for life in general, but particularly so when it comes to fishing. Every angler knows that the number of things that can go wrong on the water vastly outnumber those that can go right. The worst-case scenario is always lurking nearby, waiting to drop down on you. Any of us would be almost stupid not to expect it.

With that in mind, my recent trip to the Florida Everglades with my friend George should have had an excellent chance for success. On most fishing trips, the worst that’s apt to happen is that you don’t catch fish. But the Everglades are special, not so much because they’re one of the country’s top destinations for mixed-bag saltwater angling, but because there’s at least the slim chance of being killed by an alligator, crocodile, shark, or poisonous snake. So if you assume the worst will happen in the Everglades, all you really need to do to have a better-than-expected trip is come back alive. Even if you catch no fish and have one of your limbs lightly gnawed on by a reptile, technically, the trip would be a considerable success.

But I blew it. A couple of weeks before we left, I spoke with several people in the Everglades who said we really didn’t have to worry about the gators, crocs, and sharks, and that we probably wouldn’t even see a poisonous snake. Worse, I read a number of articles detailing the area’s great fishing, and by the time we reached South Florida, I fully expected not only to come back alive but to catch scads of big snook and baby tarpon.

Normally, I’m sure I’d have been able to find something positive in the fact that in four days of fishing, which included two and a half days of paddling a canoe 20-some miles into a stiff wind that perennially shifted into our faces, we caught a few ladyfish, a couple of pompano, and a handful of small snook. Normally, I’m sure I’d be able to point to the facts that we didn’t get skunked, we didn’t get lost, and we didn’t get eaten. But in the end, by and large, the trip sure felt like a bust.

In retrospect, however, there is one big upside. Now that we’ve been to the Everglades and had our backsides thoroughly handed to us, next time we should have no trouble keeping our expectations in the basement, where they belong.