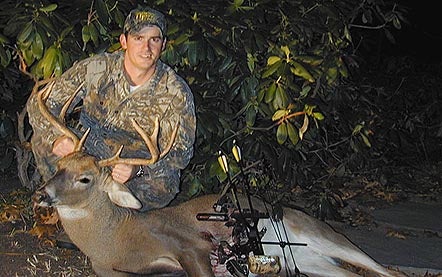 Now that we’ve spent a couple of weeks more or less bashing the television coverage of our sport — in which both my comments and the vast majority of yours suggested that the deer hunting done on TV might as well be taking place on a different planet — I think it’s only fair that we look at the other side of the coin.

Some of you have already noted that although most of the filmed hunts amount to pure fantasy (compared to our average hunts), they can be fun to watch. The small screen provides the only chance many of us will ever have to see a 170-class buck, for example, and there’s a certain entertainment value in that alone.

Others have mentioned that sitting on the couch to watch a hunt, no matter how unrealistic, beats any of the household chores you might otherwise be doing. And who can argue with that?

But to my mind, the most positive and promising thing that can be said of TV hunting is this: Once in a while, you do see a good episode. In your e-mails, many of you suggested that TV is simply the wrong medium for realistically portraying the hunting experience. And by and large, I agree. But a few good episodes prove that it can be done, and done well.

Most of the best shows I’ve seen have involved small-game, gamebird, or waterfowl hunting. But I’ve also caught a couple of quality deer hunts, one where a young hunter took a forkhorn on public land, and another that featured an antlerless-only muzzleloader hunt on some average Joe’s back 40.

By far the best episode I’ve watched over the past few years captured a terrific elk hunt. It was a guided affair. But it took place on public land, and both the young woman hunter and her guide clearly worked hard to stalk within gun range of a good bull. When they did, the woman dropped to the prone position for what was a fairly long and difficult shot. It took a little while for her to settle down. She was clearly nervous. But when she pulled the trigger, the bull fell in its tracks. And when the camera panned to her face, she was crying.

Now, one of the problems I have with the majority of hunting shows is the hunter’s reaction to the kill. As often as not, when the animal goes down, the hunter pumps his fist while whooping, “Yes!” To me at least, this looks badly inappropriate. Which is not to say that it is, necessarily. I’m sure I’ve pumped my fist once or twice in the field. But on camera, where the hunt is so often boiled down to nothing but the kill scene, and where the kill so often looks easy, all that fist-pumping comes across as shallow, even crass — as if hunters get some tasteless charge out of killing things.

I’m not saying, of course, that every hunter in front of a TV camera should cry after the kill, but this woman did our sport justice. To look at her face, you couldn’t tell if she was crying out of sadness, reverence, or joy. In fact, she seemed to alternate between feeling all three. One second she was sobbing; the next she was smiling. One second she was sighing; the next she was quietly laughing. Finally, she said, “That was intense.”

Her reaction conveyed what a fist pump never can: that killing a game animal is a complicated and overwhelming emotional experience. Not all of us are going to cry over it, but I think most of us (and I’d like to think all of us) do in fact feel it. In my 20 years of hunting, this woman’s reaction was the most appropriate and telling I’ve ever seen on camera or off. Moreover, it was good television.

So, it can be done: The TV can portray our sport realistically and tastefully. It’s just too bad that it so rarely does.