My mother-in-law meets the wildebeests. 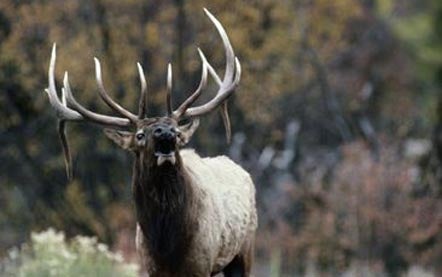 I was out casting with my fly rod on the lawn the other day when my mother-in-law, Bertie, stopped by. She got out of her car, walked over to me, and said, “So how’s your double-truck coming?”

“Oh no,” she corrected herself, “not double-truck … what do you call it … your U-haul.”

“I think you mean double-haul, Bert,” I suggested.

She laughed. “Oh yes, that’s it. How’s your double-U-haul coming?”

“Great,” I said. “I should be totally moved in by the opening day of trout season.”

This exchange was pretty much par for the course between me and my mother-in-law, who, in her defense, had had absolutely no association with the hunting and fishing realm before her daughter started running around with the likes of me. And despite the fact that she hasn’t mastered all the jargon yet (this past deer season, she asked if I was “ground-hunting” or hunting from my “treehouse”), she does deserve credit for trying, and she is slowly gaining some understanding of our world. When I come back from hunting, for example, she no longer asks me if I “caught” anything.

I can’t, however, take all the credit for Bertie’s progress. Seeing the world from a new perspective often requires some sort of shocking experience or epiphany. Bertie’s came by way of Cabela’s, at the grand opening of their Pennsylvania megastore. During a road trip to see some in-laws last year, I noticed a billboard advertising the new store, and Bertie and my wife, Robin, agreed to throw me a bone. So we pulled off the highway for what we imagined would be a quick visit.

The store’s service road brought to mind Yellowstone National Park’s on a Sunday in August. Its parking lot was teeming like a county fair. Packed with people, the place would make a Wal-Mart Supercenter seem like a 7-Eleven. Facial hair and camo clothes were on parade like long hair and tie-dyes at a Grateful Dead concert.

Robin and I helped Bertie pick her jaw up off the ground. Then we joined the throngs filing through the front doors, where we found ourselves in line next to a young woman who was pushing a double stroller and talking excitedly on a cellphone. Bertie bent down to admire the pair of towheaded babies and smiled at the mother, who smiled back, then said into her phone:

“I killed three woodchucks with my .243 this morning. It was awesome. My longest shot was almost 200 yards, and I dropped the little bugger right in his tracks. I can’t wait for deer season.”

Bertie leaned over to me. “Did she just say what I think she said?”

Finally we reached the middle of the store, which featured a giant diorama of game animals in their respective habitats. The display was twice the size of my house and had more stuffed critters than the Museum of Natural History.

“Well, you don’t hear that every day,” Bertie said. “Which ones are the wildebeests?”

At ten after one, Robin and I were waiting at the wildebeests, scanning the area for Bertie, and finally spotted her zigzagging through the crowd like a lost child. When we called her over, she could barely speak. She looked shell-shocked.

On our walk back to the parking lot, we learned that she’d spent 20 minutes at the waterfowl-calling exhibition where a staff member tried to show her how to blow a duck call. In the gun shop, another worker mistook her vacant stare into the gun rack as interest in a particular model and showed her every Winchester lever-action rifle they had. Then she mistakenly stumbled into the Shooting Gallery, and it took her a half hour to find her way out.

By the time we reached the car, she had nearly recovered her senses.

She patted me on the shoulder and smiled. “Well, I always wondered which planet you lived on. Now I know.”

If you can relate to Dave and his experience with his mother-in-law let him know. Dave welcomes you to e-mail him your stories regarding non-hunting buddies, wives and family members. Drop him a note at davesplace1@aol.com