The art of the bragging phone call. 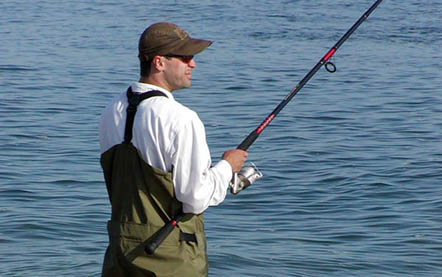 There’s a certain phone call every fisherman loves to make. It’s the one where you call your fishing buddy to tell him what he’s missed. It’s the “You should have been there” call. And no one loves to make it more, or makes it more often, than my friend John.

It started a bunch of years ago when he and I camped on one of New York’s better trout rivers. It rained all afternoon and evening the first day, and while we caught a few fish early on, the action got slower and slower as the water level rose. We woke the next morning to find the river skirting the top of its bank and running chocolate-milk brown.

That was enough for me. I decided to leave early, but John stayed. And later that evening I got a phone call. No greeting, no salutation, just: “A 20-inch brown on a white Zonker.” Click.

Some time later, after I failed to join John on a lake trout outing, my wife said we had a strange message on our answering machine and that I should come listen to it. So I pressed the button:

“Hi Dave and Robin. It’s so-and-so. Are you going to make it to the such-and-such? Call me.” Beep.

“This is the American Red Cross calling to remind you that we’re having a blood drive on Wednesday three o’clock at the middle school. Hope you can join us.” Beep.

Since then, I’ve gotten a number of such messages; I’ve got similar e-mail messages; and not long ago, I was talking to a mutual friend when out of the blue she says, “Oh someone wanted me to tell you: ‘One 5-pounder and a bunch of 3-plus-pounders on a Texas-rigged Senko.'”

Until now, it’s always been John making these calls (or leaving these messages). For some reason, he seems to have particularly good outings when I can’t make it–and he has his best days when I leave early. But not this last time.

We were camping on another well-known New York trout stream. Again, it rained much of the first day, but this time John decided to leave early the next morning. This time I stayed and fished, and along with a bunch of smaller trout, I caught two 18-inch browns on an Isonichia emerger. This time, I had a phone call to make.

I walked straight to the phone when I got home, dialed John’s number, and got the answering machine. I was about to leave a short message with just the facts when I heard the doorbell ring, saw my brother and my two nieces at the door, and thought of a better idea. I hung up.

Then I asked my youngest niece if she would leave the message, and she said she would. So I told her what to say, dialed John’s number again, and handed her the phone.

“Er, Hi! John?” she said and there was a long expectant pause. Then, “JOHN?!” I motioned to her to just go ahead and leave the message. Not sure what to do, she released a long, exasperated sigh into the receiver and said, “Um, hold on a second, okay?”

I whispered what to say again. She nodded and raised the receiver back to her mouth. “Er, John? … Two 18-inches … on a … er … I-nikia mergy! … Bye!” He should be thinking about that one for a while.