The clever way to buy a bird dog. 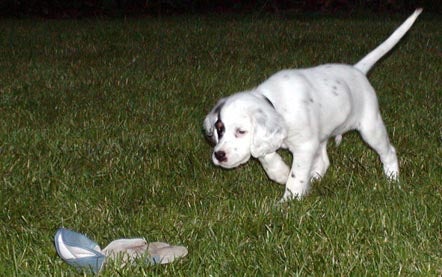 My friend Paulie has been talking about getting a bird dog since I’ve known him. And at first (because he and I always hunt birds together and his getting a dog would benefit me) I tried to get him to do less talking and more getting. But he could never pull the trigger.

Eventually, the thought of getting my own dog crossed my mind, but at the time I wasn’t settled down enough, and I didn’t want to part with the money it takes to buy a purebred puppy. So, some years ago, when Paulie called to tell me what I’d already heard a dozen times, I decided on a plan.

“Well, I’m finally getting my dog,” he said.

“I’m telling you, it’s a done deal. I drove to the breeder’s today and watched the dogs work. All I have to do is pick out a puppy and take it home.”

“Ain’t going to happen,” I said flatly. “Too much time for you to change your mind.”

“Double or nothing,” he said. “I’ve already picked out a Brittany puppy and put a deposit down.”

“How much was the deposit?” I asked.

“And that’s what you lose if you change your mind?”

About a week later, he called again.

“I’ll tell you what,” he said, “quadruple or nothing that I get one within six months.”

“Six months?” I said. “Heck, I’ll give you a year. I’ll give you three years.” I figured it’d be at least that long before I’d be ready to get a dog.

Well, the three years came due about a week ago. And in the meantime, I’ve settled down, with a place of my own and a big backyard. What’s more, I recently met a breeder of Small Munsterlander pointers who has a brand-new litter of puppies for sale. I called Paulie last night.

“I’ve got great news for you, Paulie.”

“Remember that money you owe me?”