Could a slimy, infested swimming pool be an angler's best investment? 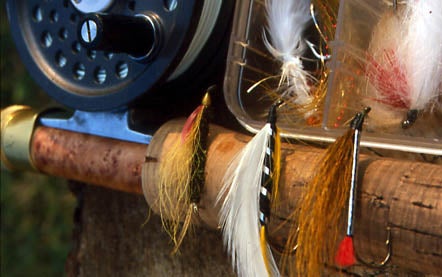 Some of the best summer trout fishing around here comes when clouds of flying ants mate in midair, die, and then fall to the surface of the local streams where trout wait to feast. The problem, though, is that it’s nearly impossible to predict exactly when spent-wing ants will be on the water. They seem to appear instantly and en masse at random times — on random days — throughout the summer months.

Over the years, I’ve only managed to catch the flying-ant fall a few times: twice by accident, and once last summer when the mating swarms were so thick that they announced themselves as gray, shape-shifting hordes riding above the horizon. My brother and I were playing Wiffle Ball when we noticed the ant fall. We dropped the bat and balls to head straight for the stream, and as I released one of several trout I caught that day, I said, “Man, I’d pay good money for a better way to predict this fall.”

Not long ago, I discovered that one of the skimmer lines on our swimming pool had developed a leak. It was just the latest headache in a never-ending battle with a money pit I never wanted in the first place. When my wife and I bought our home five years ago, we did so despite the pool. In fact, we had no interest in any sort of swimming pool, especially not one that could only be described as a cement pond.

Having never been used or maintained by the previous owner, the pool water was jet-black and alive with frogs and tadpoles. A pair of blue herons made daily visits to hunt. Worst of all, the bottom was covered with a foot-thick layer of gooey brown muck that, to our complete horror, hid a number of Eastern Toe Biters–a type of giant water beetle that grows to 5 inches long, sports a pair of formidable pincers, and is just about the most hideous thing you’ve ever seen.

Our first inclination, of course, was to bring in the bulldozers. But the pleading of our nieces and nephews’ parents eventually wore us down. So I spent days removing wheelbarrow loads of nasty sludge, from which emanated not only its horrifying inhabitants but a stench so noxious that it singed the hairs on my arms and bore holes through the facemask that was supposed to prevent me from gagging.

Eventually, I got the pool clean. But that was only the beginning of the problems. Since then, maintenance has proved a summerlong hassle. We have more friends and relatives with kids than we ever could have realized (or wanted), and whenever something breaks it requires a second mortgage to fix it.

When I called to see how much the leaky skimmer line would run me, the salesman tried to put me at ease.

“Well, Mr. Hurteau,” he said, “if you dig the trench and remove the old skimmer line, it’ll only cost you the price of the hose.”

“Great,” I said. “That sounds reasonable. How much can 30 feet of hose cost me?”

That was it. I’d had it. My next call was to the wrecking crew.

“How big is your pool?” asked the guy on the other line.

Since I didn’t know off the top of my head, I took the phone with me to the pool to make a guess. Then I noticed something.

I grabbed my rod and waders and drove to the nearest trout stream. Sure enough, the fish were rising steadily to the same flying ants that covered the surface of my pool.

Looks like I’ve got a better way to predict the flying-ant fall. And you can bet that I’m going to pay good money for it, too.