Five spots where world-class fishing meets the blacktop (or at least the gravel.) 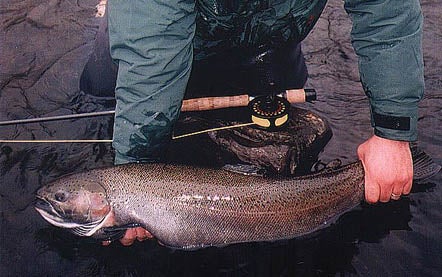 The bush plane is Alaska’s 4×4. But maybe you don’t relish the thought of scraping the treetops in an aircraft little bigger than a Ford F-150. Maybe the cost of puddle-jumping stands to bust your vacation budget. Either way, no worries.

Alaska’s wilderness character may be largely defined by its lack of asphalt, but the state’s few major highways and smattering of secondary roads nonetheless lead to some of its best angling. Whether you want prolific salmon runs a short jaunt from your hotel or trophy Arctic char beyond the middle of nowhere, you can drive to it. Here are five great road-trip rivers.

**Thorne River **
Forty-five miles northwest of Ketchikan, it’s one of the most scenic, most accessible, and best trout and salmon rivers in Southeast Alaska’s largely roadless wilderness.

You can fly into Ketchikan, rent a car, and take a 21/2-hour ferry ride to Prince of Wales Island. Thorne Bay Road crosses the river 2 miles from the mouth and parallels it for more than 8 miles.

The Thorne has world- famous steelhead runs in late March through mid-May and November through December; silvers from mid-August to early September; plus cutthroats, rainbows, and char. ADFG Juneau office: 907-465-4180

“In August the action explodes with millions of pinks, cohos, and sockeyes,” says Art Moody of the Boardwalk Wilderness Lodge (800-764-3918). “Come in spring and pack pink or purple egg-sucking leeches for lots of nice steelies.”

Russian River
This shallow and swift-running clearwater tributary of the Upper Kenai River is about 50 miles south of Anchorage. There’s excellent road and foot access to one of the Kenai Peninsula’s top spots.

Fly into Anchorage and drive south on the Seward Highway, then west on the Sterling Highway to the town of Cooper Landing. From here, several access points lead to foot trails following much of the river’s length.

“The red run on the lower river is the definition of combat fishing,” says guide Mark Glassmaker (800-622-1177). “But if you know what to expect, it can be both fun and very productive. To lose the crowd, hike upstream, especially for rainbows and Dollies.”

From Anchorage, take the Parks and then the Glenn Highway to the town of Gulkana. Here, the Richardson Highway parallels the river, with access at the Gulkana bridge and Sourdough Campground.

You’ll find great grayling fishing from May to September, abundant king salmon from late June through July, then reds through August. Trout fishing is good from July through September. ADFG Anchorage office: 907-267-2218

“There’s a good one-day float from Sourdough to the Gulkana bridge,” says Dave Kamakawiwoole of River Wranglers (888-822-3967), “but the four-day float from Paxson to Sourdough is brilliant. You’ll get grayling, kings, sockeyes, rainbows, and Dollies.”

Fly to Fairbanks and drive south on the Richardson Highway to Jack Warren Road. Then take Remington Road to the state campground, for foot and float access.

“In summer, you’ll have some of the best dry-fly fishing for grayling you can find,” says Richard Burns of the Alaska Department of Fish and Game. “Silvers to 14 pounds or more stack up in the river in fall and will take purple egg-sucking leeches.”

From Fairbanks, take the Elliott Highway Number 2 north to the Dalton Highway. Starting just north of Pump Station #3, the river parallels the road for more than 100 miles. You’ll need a good map to locate the access points along the highway.

Some 300 miles north of Fairbanks, you’re basically at the end of the earth. The road is rough, with no services north of Coldfoot. This is extreme angling, so plan carefully. But it’s also angling for one of the world’s most beautiful fish in one of its wildest places.