Trout (and marital) bliss on the Upper Kenai 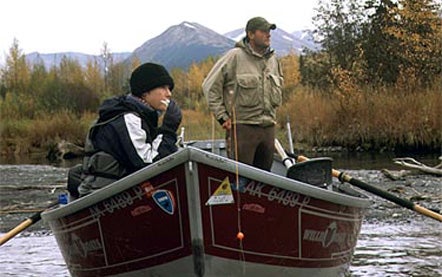 On Alaska’s Kenai River, there is a chance, however slim, that a 1,000-pound grizzly bear will slap your face off, or a 1,500-pound moose will stomp out your innards. But by far the most dangerous thing on this (or any) river is my wife, Robin, not catching fish.

At 7 a.m. on the fifth day of our honeymoon, as our guide, Billy Coulliette, shoved the drift boat through a thin fog and into the current, I was afraid. Generally, Robin is very easy to please, but on the water and fishless, she can become, well, scary. An eight-hour float trip might easily deteriorate into disaster.

Seconds after we drifted past a bedded sow grizzly, who lifted her head sleepily to watch her cub amble down the bank and nose a dead salmon, Robin made her fifth cast and boated her third fat rainbow. She turned to me, grinning.

Overhead, small bands of Dall sheep filed along the high crags of the Kenai Mountains. Under the boat, the silt of 10,000-year-old Snow Glacier painted the river Crayola turquoise.

I was in Alaska, on my honeymoon, fishing the Kenai River, and my wife was perfectly happy. People bandy about the phrase “It doesn’t get any better than this,” but honestly, does it?

**A Tale of Two Rivers **
The Kenai River winds some 80 miles across the Kenai Peninsula in south-central Alaska, closely flanking the Sterling Highway along much of its course. For angling purposes, it’s really two rivers. From the outlet of Kenai Lake, the Upper River runs swiftly westward through the Kenai National Wildlife Refuge and into Skilak Lake. Then the flow widens on a 50-mile route to Cook Inlet, forming the Lower River and the world’s most famous king salmon fishery (once the home of the 97-pound 4-ounce world-record king).

On the Lower River, anglers queue in back-trolling motorboats or along the banks, hoping to hook a fish the size of Mary Lou Retton. The Upper River offers a quieter experience: Neither motorboats nor king salmon fishing is allowed above Skilak Lake. The result is a comparatively sparse flotilla of McKenzie-style drift boats and inflatable rafts offering anglers a fine chance to soak up Alaska’s wilderness character while flyfishing for trophy rainbow trout and Dolly Varden. Genetically unspoiled since the day the species entered the river in the Pliocene epoch, the Upper Kenai’s trout and char are as pristine as granules of glacial ice. They are also fat and strong.

On a diet of eggs and flesh, the river’s resident rainbows and Dollies can grow to a plump 20 pounds. Most, of course, go considerably smaller, but 8- to 10-pound catches aren’t uncommon. Although Robin and I didn’t land any much larger than 6 pounds on our trip, she did get a real good look at a 9-pounder. We were floating downriver, and she’d just lost a big fish.

“Really?” she asked, a little disappointed. “I wish I’d gotten a better look at him.” And with that, we beached the drift boat for some wade fishing.

“Got one,” Robin said from the shallow edge of a deep run. I looked over to see her rod bent as if the hook were lodged in one of her wading shoes. Just then, a missile of a rainbow launched through the surface from near her knees to near her nose, where it shook the hook, along with a few thousand droplets of river water and fish slime.

“I know,” Robin answered, wiping her face with a gloved hand. “I got a little better look at that one.”

After a full day of drifting bead eggs beneath indicators with 6-weight fly rods, Robin and I had caught more fish than we could tally. Estimating would be like guessing the number of jellybeans in a gallon jar-and it would be irrelevant. No fish ccount can quantify how good the fishing is here. After all, it kept Robin-quite possibly the world’s most demanding angler-busy, happy, and amazed for eight straight hours.

Trip Planner
**When to Go: **Upper Kenai trout and char fishing peaks from August 15 through the entire month of September, as sockeye salmon lay eggs in earnest and rainbows and Dollies go on a feeding frenzy. If you want a good shot at hooking bonus silver salmon, go anytime from the end of August to the first two weeks in September. Keep in mind that the later you go, the more wintry the weather can be.

Regulations: Rainbow trout fishing is strictly catch-and-release. The same is encouraged for Dolly Vardens, although you may keep one fish under 18 inches per day (with a one-fish possession limit).

Tackle: Guides will typically provide tackle (be sure to ask). Otherwise, bring a 9-foot, 6- to 8-weight rod with a floating line and a 9-foot leader that tapers from a 30-pound butt section to an 8- or 10-pound tippet. The “fly” of choice is a plastic bead egg or two stopped a couple of inches above a size 8 or 10 bare hook. This rig is drifted below a 1-inch-diameter float, or strike indicator. If you’re fishing without a guide, be sure to stop at a fly shop and ask which colors and sizes of bead eggs are hot. This can make all the difference. You’ll also need a net, and either neoprene waders or lightweights with a warm layer underneath. And this is Alaska, so don’t forget the rain gear.

Services: Guide fees for an eight- to 10-hour float trip run about $210 per person. You do not need a guide to fish the Upper Kenai, as it has numerous access points to wadable fishing. That said, getting one is an excellent idea, at least for the first day to learn the ropes.

**Accommodations: **Single- and double-occupancy rooms with kitchens are available at Alaska Troutfitters Alpine Motel in Cooper Landing for $95 to $115 per night (with a $10 discount per night if you fish with them for one or more days). There are also four campgrounds in the immediate area, as well as several bed-and-breakfasts.