Looks count for nothing when your gun won't shoot straight. 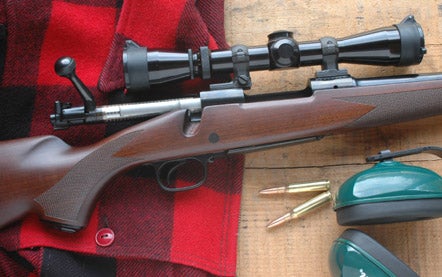 Now I’m really in trouble. As you may recall from a previous column (“Gun Fever”), I bought a new deer rifle late last summer. After about four hours of deliberation at the gun store, I went with a Winchester Model 70 Classic Compact in 7mm/08. And despite the lengthy time I spent pondering, I’ll admit it was a bit of an impulse buy.

At the same store was a rifle I’ve coveted for years-a Remington Model 700 Mountain Rifle in .260. I had this gun in my hands, and the money to buy it in my pocket. But I had put it down for a minute to do a little more browsing when the Winchester caught my eye.

“Now this is a great-looking rifle,” I said, picking it up.

“Not bad,” my friend Paulie agreed.

“It’s better than not bad, Paulie,” I argued. “You have admit, it is better looking than the Mountain Rifle.”

“Maybe,” he reasoned, “but the Mountain Rifle is the one you’ve always wanted. It’s a better caliber for a light rifle, it’s got a detachable clip, and it ain’t bad looking in its own right. You should go with that one.”

All of this made perfect sense, of course, but the slim lines and dark wood of the stock and the overall understated, classic look of the rifle in my hands was occupying too much space in my brain to leave room for anything Paulie had to say. So I bought the Winchester.

Now a year has passed, which means Paulie has had 12 months and at least a couple dozen hour-long conversations in which to tell me why I should have gotten the Mountain Rifle. Here are three of his more persistent arguments:

(2) “I know a couple of guys who have Model 70s, and they both complain about the weight of the trigger. You’re probably going to have to pay for a trigger job.”

(3) “It’s a great-looking rifle, but when it comes right down to it, the deer don’t care what your gun looks like.”

Of course, I could have put all of this to rest quickly by just shooting the gun. For better or worse, I’d at least have had an answer for each of his arguments. But for reasons that are too complicated to explain here (and too embarrassing to admit), I didn’t scope and shoot the gun until this past weekend. So, I’ve had to listen to Paulie’s jabbering for an entire year, all the while hoping that the rifle would finally prove him wrong at the range.

This weekend, it had its chance. And naturally, it proved him right on every point.

Though hardly unmanageable, the little gun’s kick is indeed a bit more than I’d hoped. The trigger, in a word, is abominable. In four words, it’s totally off the scale. If I had to guess, I’d say it breaks at around 8 pounds. Although this probably has as much to do with the trigger as with the rifle’s accuracy, the gun didn’t group very well. And I have to admit that after a couple of hours at the range, I was beginning to reevaluate the importance of looks in a rifle.

In short, I’m in trouble.

As I see it, I have two options. (Some would say I have three options, including calling Paulie and telling him he was right. But these people would be wrong.)

First, I could say nothing to Paulie for now, spend another $100 on the rifle to get the trigger done, and just live with the kick. Then, I could tell Paulie that the trigger is perfect, the kick is manageable, and it’s still a great-looking rifle. I wouldn’t even have to lie, per se.

Or, I could just very quietly trade it in for a Mountain Rifle in .260. Of course, Paulie would notice this eventually. But it would put off the “I told you so’s.” I’d have the rifle I really want, and I could always say I found a deal I just couldn’t pass up (which wouldn’t necessarily be untruee, either).

For now, I’m going to call the local gunsmith to find out how much he charges for a trigger job. I’ll keep you posted. In the meantime, if you have any suggestions, e-mail me at[ davesplace1@aol.com](mailto: davesplace1@aol.com).