Forget shot-there's more than one way to smash a target. 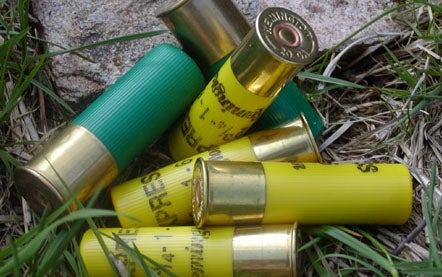 So, this past weekend I took Field & Stream editors Jean McKenna and Donna Ng on their first duck hunt. Originally, it was going to be a grouse hunt, but according to Jean I supposedly suggested it might be best if they didn’t have to walk and shoot at the same time.

Of course, I never said any such thing. I will, however, admit that this being their first duck hunt, I might have had somewhat low expectations of their abilities. But if I did, Jean and Donna immediately proved me wrong when they showed up a day early to shoot some clay birds in preparation for the hunt.

Before last Friday, Jean had shot a shotgun only a few times, and Donna had never fired one. Nonetheless, almost every target they shot at broke, and the vast majority of them broke in exactly the same way they do when I’m shooting.

In short, they were naturals, with an instant grasp of something many experienced shooters never learn. Countless target shooters obsess over things like gun fit, proper mounting technique, and forward allowance, but a few of us realize that it needn’t be that complicated. We understand that the most rewarding thing in clay-target shooting is watching the target break. And while it doesn’t hurt to mount the gun and shoot-because there is the slim chance you might clip the target with a stray BB-in truth, the majority of clay birds break when they hit the ground. So if you maintain focus after you miss, keeping your eyes on the target throughout its entire flight path, you’ll see it break. Eventually.

It took me years to learn this, but Jean and Donna seemed to understand it intuitively. The first target I threw sailed straight away. Jean shot and missed, then watched the disc arc downward and smash into a distant tree trunk. “It broke!” she said.

Even more impressive, Jean and Donna found ways to break targets that in my 20-plus years of shooting I’d never even contemplated. We were using a hand thrower, and though they did most of the shooting, when I did step up to shoot, one of them had to throw. Taking turns, both managed to break targets trying to put them in the thrower. This was innovative but, in fact, was just a warm-up to the piÂ¿Â¿ce de rÂ¿Â¿sistance, which came with Jean doing the throwing.

When I said “pull,” Jean whipped around the hand thrower with a sidearm slinging motion, but the target didn’t release. So I said it again, and she tried even harder. Still the clay didn’t budge. The third time, Jean reared back, putting her shoulder into it, and whipped the thrower as hard as she could. Finally, through the corner of my eye, I saw the target flying through the air-with the bright red thrower still attached. It landed in a pile of rocks about 4 feet in front of her. And lo and behold, the target was in pieces. Not to be outdone, Donna stepped up and did the exact same thing.

Clearly, both of them knew how to break targets–even proving their versatility by busting a few in the conventional way. I can say that at the end of the day, despite their relative inexperience, there was no significant difference between their shooting and my own. Moreover, they would similarly prove themselves in the duck marsh the following morning-the details of which I’ll reveal next week.