They came. They missed. They had a great time. 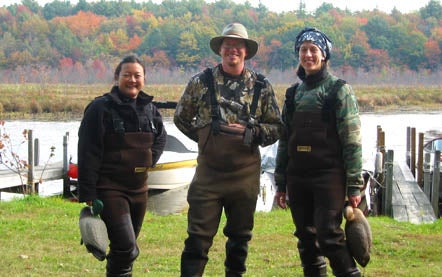 Last week, I told you about my taking Field & Stream editors Jean McKenna and Donna Ng clay-target shooting in preparation for their first duck hunt. That was a Friday afternoon. At 6 A.M. Saturday morning, the three of us, along with my brother Dan, paddled into the marsh, where Jean and Donna would prove that despite their inexperience, they could hunt ducks with the proficiency of hunters who’ve been at it for years.

By “hunters who’ve been at it for years,” I mean specifically Dan and me. We’ve been missing ducks at this spot for more than a decade, and now Jean and Donna would get their chance.

Dan and I didn’t shoot. I didn’t because I thought it might be helpful for me to hang back, call the ducks, call the shots, and offer any coaching that might be needed. Dan didn’t because when we reached the marsh, he realized that he forgot to get his duck stamp-and therefore couldn’t hunt. To his credit, he wasn’t at all disappointed, pointing out that his chances were about the same with or without a gun.

With the decoys set, the canoes stashed, and Jean and Donna in position, the ducks started flying. First, a bluewing teal corkscrewed into our decoys and left, unscathed by Donna’s best effort, a darting silhouette against the first shades of shooting light.

“It’s hard to get a bead on them in this light,” I offered.

Then a woodie cruised by overhead, untouched.

Then a mallard set its wings in front of Jean.

“Those cupped-wing shots are harder than they look,” I suggested.

Another woodie and another mallard later, when the early-morning flurry was over, Dan and I took stock, having watched it all unfold in front of us.

“You know,” I said to him, “This looks eerily familiar.”

“I know,” he agreed. “It’s like watching ourselves hunt.”

“Yeah,” I said, “although it’s easier and more fun to make excuses for someone else’s misses.”

“Definitely,” Dan said. Then we both turned to Donna and Jean: “You guys are doing great!”

“Oh yeah,” Dan answered. “It’s going exactly to script. Now all you have to do is miss the best opportunity of the day because you’re not paying attention.”

“What do you mean?” Donna asked.

The ducks had all but stopped flying, and we were in the midst of a protracted lull when Jean asked for a cookie. I fished one out of the dry box and prepared to throw it to her.

The cookie whirled over the cattails between us, floated on a downward arc, and fell softly right into the middle of Jean’s outstretched palms. “I told you,” she said, as it rolled out from her fingers.

Donna elected for a granola bar, which was fortunately wrapped in plastic and stayed afloat after bouncing off her palms. She was busy unwrapping her snack and Jean was combing the cattails for her cookie when a lone mallard sailed down the middle of the channel, lowered its feet, and dropped toward our closest decoys. It was the best opportunity of the day. Donna dropped her granola bar, and Jean reached for her gun. But the duck flared, eventually flapping beyond the range of a pair of harmless parting shots.

At the diner Dan and I always go to after our duck hunts, I pushed my empty plate aside and asked the waitress for one last warm-up.

Jean and Donna agreed. They’d had a good time.

“And you guys did great,” Dan said.

“We didn’t hit a single duck,” Donna pointed out.

“That doesn’t matter,” I said. “You came. You shot. You missed. And you had a good breakfast. That’s pretty much what Daan and I have been doing for years.”

“Yeah,” Donna said. “And it was pretty in the marsh this morning.”

“Beats working,” Dan said, and they both agreed. Clearly, they were catching on. In time, they’ll make fine duck hunters.